*For only the second time this season (iirc), a Chelsea match was NOT televised live. Anywhere. Inconceivable! Although I do remember not so long ago when I would've killed to just SEE two televised matches all year here in the States. But I digress.

**SPOILER ALERT: Chelsea win 4-0. Due to whatever passes these days for radio play-by-play, I had very little idea of what actually was happening on the pitch when I listened live. I did get the impression that we played badly and that the scoreline was flattering...but it turns out that was only half the truth and actually this match was as routine of a victory as you'd like.

Preamble - As the teams walk out on to the pitch, you must wonder if you didn't accidentally stumble upon the replay of a Premier League match from a couple seasons ago. There's Petr Cech in goal, John Terry, Ashley Cole, Jose Bosingwa in defense (or..."defense" in the case of the latter two), Frank Lampard in the middle, Florent Malouda out on the left. And then you realize that it must be a Premier League match from THIS season, since you spy a David Luiz in defense, a Raul Meireles as the holding midfielder, and a Juan Mata at the top pulling the strings of constant disappointment (a.k.a. Fernando Torres). But you could've sworn this was just a cup game versus lower league opposition...did the TV Guide lie to you?? That asshole 'DPeezy' on WAGNH told you that Romelu Lukaku would start, that Josh McEachran would claw his way out the basket and that Ryan Bertrand would get a kick. What a dick, that guy. DPeezy, that is. Liar. Messing with your emotions.

With the mood thus ruined, you reach for your favorite teddy bear (Avram?) for comfort and settle in for what is surely be a right ol' thumping of hapless Pompey.

00min - Dave Kitson has glorious red hair. Dr. Eva has been relegated to row 2 of the "bench". John Terry flips the coin. Wait, shouldn't the referee be doing that?? Chelsea fans having serious problems re-furling the big flag. You're supposed to pull only one way, chumps.

01min - Magic Ginger Messi David Kitson flicks the ball over his own and Luiz's head with the outside of his heel, before rolling his shot juuuust wide of the far post. That really was awesome. FA Cup MAGIC!

05min - Pompey's plan is clear, physical, and direct. Their front two are bigger than everybody else on Chelsea combined.

07min - Malouda tries his own Messi Magic, but he's no Kitson. Chelsea are definitely looking play through balls, but they've been either cut out or have been too hard. Meireles's distribution looking good - I'm glad AVB has at least learned not to waste a proper "holding" mid in fixtures such as these. Malouda has lost the ball at least 3 times already. Torres is dropping deep to get involved, Lampard has made 1 timely run. Chelsea have had all of the ball.

09min - Bosingwa stands up a nice cross after combining well with Mata on the right. Portsmouth's physicality ensures that no one gets on the end of it. Fernando Torres is out of his league in amongst those English ruffians.

12min - Chelsea continue to pass, pass, pass. Then Malouda lumps in a cross and Torres gets a head to it but it's straight at the keeper. Nando then turns and continues to complain to the ref about the Big English Meanies.

18min - After the complete Chelsea domination, Pompey grow a bit into the game. Terry tries to tackle Kitson; hilarity ensues and windows around Stamford Bridge rattle a bit as the big man lets out a loud bellow and throws JT to the ground. Then Futács does a nifty pirouette to beat both Terry and Ramires (in the center circle) but JT recovers nicely. Then Ashley Cole gets beaten by some random Championship-level talent on the right; Aaron Mokoena wins the header from the resulting corner, but it's well over.

20min - Cole & Malouda do their best Barca impression and pass between each other like a dozen times, going nowhere. And then it's the South African Meanie's turn to pummel Torres who then complains some more. Chelsea fans serenade Torres as compensation for his ails.

26min - The TV cameras finally realize that one of the linesmen is actually a lineswoman. So they show her for like a minute straight. Alas, Andy Gray & Richard Keys are not our commentators, so this passes without much excitement.

45min - Yeah, I skipped 20 minutes as it all got a bit low key. It's not that Chelsea are playing badly - we're passing the ball nicely (when Portsmouth aren't kicking everything that moves), moving it from side-to-side and creating opportunities where the "final" ball is just a bit off...except those times when we just resort to pumping it towards the stands behind the goal from long range (each midfielder has been guilty of this at least once). It's easy to criticize this, "lack of cutting edge" or whatever you want to call it...but it really is just one of those times where you have to stay patient against a team playing 8-2-0.

47min GOAL! - Second verse, same as the first. Or is it!? Malouda fluffs a rare Chelsea counter ("only" 6 players back that time), but (after Ashely Cole blocks the Porstmouth clearance) makes up for it with a driving run into the box, down to the byline where he pulls the ball back for an emphatic Juan Mata finish into the roof of the net. That was easy as you like and Portsmouth are made to pay for literally the first and only time so far in the game when they didn't have 11 players behind the ball.

50min - After allowing all sorts of physical nonsense to go in the first half, the ref calls a ticky-tacky foul on Sideshow Dave in a dangerous position. Liam Lawrence curls the Pompey free kick wide.

52min - Second verse, same as the first. This time, entirely so. Chelsea are doing exactly the same thing as in the first half, but of course it all looks so much better with the scoreline now reading 1-0 to the Good Guys.

54min - In a moment of absolute madness and/or complacency, Sideshow dicks around with the ball, promptly loses it to that man Kitson again who finds Futács in the area. Heroics ensue as first Terry, then Cech save Portsmouth shots on the line. Insanity from David Luiz.

58min - I guess you can call this Portsmouth trying to press for an equalizer. But Chelsea break the other way and Mata tries to recreate the same play and pass that he gave Drogba for the third goal at Newcastle. But just to prove that it takes two, instead of running straight downfield and allowing the gap to remain for Mata's pass, Torres aims his run at the Pompey defender who is then able to cut him off and force him to pass backwards. 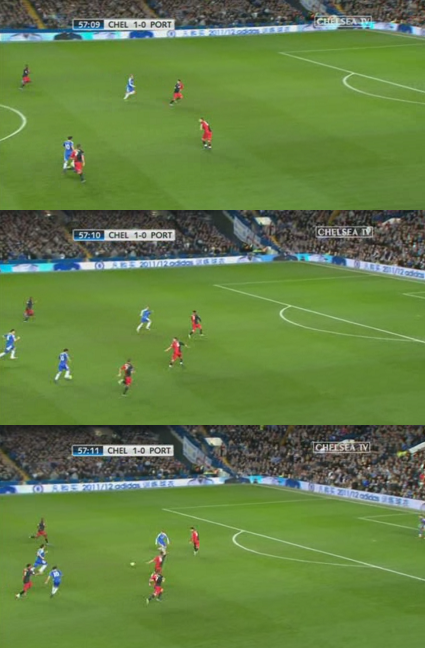 59min - David Luiz plays a bit of left wing. The actual football contest is clearly over and Chelsea decide to play the rest of this match as an exhibition. Portsmouth are more than happy to oblige by not posing any palpable danger whatsoever. It would be nice of them, however, to move more than 10 yards away from their penalty box every once in a while, too.

78min - Florent Malouda OFF, Oriol Romeu ON. As Malouda jogs off, there is an slight whiff of finality as he makes sure to applaud all sides of the stadium. But perhaps I'm just reading too much into it.

80min - The match enters the dreaded last 10 minutes (wherein we usually decide to concede, surely to keep things interesting or some such). The previous 15 minutes or so, Chelsea have alternated between the "normal service" (side-to-side passing and patient probing of the 11-man defensive wall that's been erected in front of them) or quickly breaking whenever hapless Portsmouth string 3 passes together and venture past the center circle. We look dangerous on the breaks, although they are very few and far between. Mata shows an early blueprint of the 3 goals to come, by breaking down the left and finding Torres in the area. This time, Fernando miscontrols.

84min GOAL! - Pompey starting to get a bit douchey. First somebody tries to give Sideshow Dave a condescending smack on the face/shoulder (clearly did not appreciate another episode of the David Luiz Left Wing Show), then David Norris barges into John Terry from behind. Referee ignores it all, but before things can get out of hand, Ramires settles the tie by getting on the end of a rare Torres header-win/flick in the area. Ramires to Lampard to Mata to Torres to Ramires. Wham, bam, thank you, ma'm. And finally, with the two-goal lead, the youngsters can come on. Ryan Bertrand and Romelu Lukaku make their cameos.

87min GOAL! - So much easier when you get to play on the break! Mata to Lampard to Torres to Ramires. 3-0. Nicely done by all four involved, lovely pass by Torres, Ramires's first touch was the one he needed and he finished well. It may be worthwhile to point out that Ramires has looked much better since getting moved up to the front line (when FloMo was subbed off). Versus teams that simply park the double-decker, Ramires's speed out wide may be of more use than in the middle. His best contribution in the first half was also when he got to make a run down the right wing and drew foul (and a card).

90+3min GOAL! - While we wait for the full-time whistle, Lampard makes it four. And it's really nothing less than what we deserve. Well done by all.

Man of the Match: Fernando Torres - two assist (second better than the first) and tireless work the entire game (in spite of getting roughed up early and often).