Chelsea 1-3 Aston Villa: A grand capitulation at the Bridge to close 2011

Share All sharing options for: Chelsea 1-3 Aston Villa: A grand capitulation at the Bridge to close 2011

In a rather poetic - and cruel - twist, Chelsea closed 2011 similar to how they started it, with a shit sandwich of a performance. Against the same club no less. 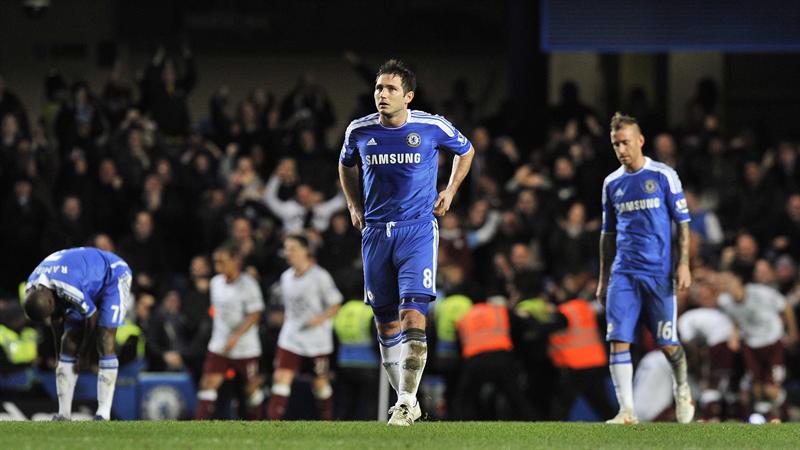 Let me first begin this final blog of 2011 (perhaps) with a few words from the heart, if I may.   We at Chelsea Offside would like to wish all of you the happiest of new years. Let there be prosperity, happiness and fruitful adventures for all. It's been a joy helming this site alongside Devin over the past 12 months - though the joy of producing content can't really match the fun of interacting with you all. Indeed it has been a blast debating the ins and outs of this club with fellow supporters. Thanks for hanging around, and may 2012 bring with it not only more excellent debate here at The CO but also an end to the wretched inconsistency that consumed the club for much of the past year.

Now, back to the shit sandwich.

As you may recall, Chelsea brought in 2011 with a lively (for the away support at least) 3-3 draw against Aston Villa at Stamford Bridge on 2 January. We blew a pair of one-goal leads on that occasion, at 1-0 and then at 2-1 with only added time remaining. Ciaran Clark grabbed Villa's deserved leveler on 91 minutes. On that day, we were pretty much atrocious. If I remember correctly, we opened the match in vintage labored style only to be bailed out thanks to a foul from James Collins in the penalty area. Sweet. At the end, we had played marginally well for, I think, about 20 minutes in the second half, during which we scored twice. A look back through the archives confirms this.

What a difference a year makes. None, actually. How similar are these two matches? Kind of eery.

We opened in what has become our usual style. There was a brief surge of attacking verve in the very early stages, only for nothing to come of it. How predictable. That, of course, resulted in our typical shift to a more ponderous approach to the contest. Then, out of nothing, we were up 1-0.

Ramires provided one of his trademark bursts from midfield before finding Drogba on the inside-right channel. Drogba, with what may have been his only good touch of the day, broke into the box and then lured Richard Dunne into a grossly mistimed challenge on 23 minutes. It was a clear penalty. Juan Mata had the ball in hand, but quickly conceded to Drogba who was seeking his 150th goal for the club. The penalty kick was actually pretty terrible, but it found the net nevertheless; the ball actually traveled under Brad Guzan who, unfortunately for him, probably moved too quickly. Regardless, we were up and Drogba had a nice moment for himself.

The Drogs is indeed a club legend, even if he has spent a majority of his career in London being equally loved and hated. Today, he was on the wrong side of supporters' abuse and rightfully so. He pretty much mailed it in following the penalty, missing a couple of good chances to give us the lead midway through the second half. Drogba really hasn't been at it since that torrid display against Valencia. With Fernando Torres producing another promising cameo in limited minutes, it's time to switch lanes.  Thankfully, that'll be an enforced change as the ACN closes in. 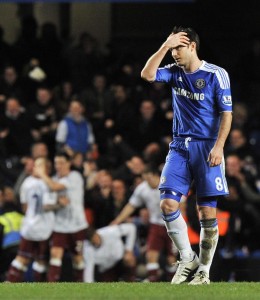 Back to the match. As has been the case with recent matches against supremely average sides, our lead was short-lived. Five minutes after Drogba had given us the lead, Villa leveled through Wiz Khalifa. Yes, Stephen Ireland of all people - this time with a shirt on - pounced after some good, not great, work from Charles N'Zogbia. Paulo Ferreira was cast into shadow not by his white-on-white mask but by the former Wigan attacker. It was terrible defending, yes, but it was also incisive play from the visitors who must be commended for the way they approached the match. They packed the midfield and final third with numbers, remained disciplined in defense and waited for opportunities to use their pace on the counter attack. It's nothing new - we've seen this for weeks now - but it worked once again. Unnerving.

The second half began just as the first had, with Chelsea monopolizing possession but doing absolutely nothing with it. There was no real pace to our play, just a lot of aimless passing across the backline and midfield before the inevitable cross was cleared by a Villa player. To give you an idea of just how turgid we were creatively, Chelsea attempted 40 crosses on the day. At one point, we had completed 1 of 19 crosses. To go even further, we created eight chances for the game, of which four were carved out by Juan Mata. Not that you didn't know before, but this just lends even more creed to all of us who are calling out for a creative midfielder to complement the diminutive Spaniard. This is why the club vehemently pursued Luka Modric in the summer. At least we have the January transfer window to attempt to bring in someone who can help us in this regard.

Anyway, as I said, the second half was following a similar pattern to the first. It wasn't pretty. Villas-Boas proceeded to make changes midway through the half, first calling on Frank Lampard. Lampard replaced Oriol Romeu, a move I disagreed with at the time - and still do. Raul Meireles was a far better candidate to be removed; pulling Romeu pretty much dissected our defensive edge in one swift swoop. AVB's other two changes didn't catch me as being nearly as bad as some have claimed. Yes, Drogba could have been axed for Fernando Torres, but Daniel Sturridge did not have a good game at all. Jose Bosingwa, in theory, gave us much more width and attacking impetus than Ferreira. Out of the three, only Torres made a telling impact. He rattled the crossbar from some 30 yards with I think his first touch, and later played in Drogba on the left of the box after a nice turn and reverse pass. It was a promising display.

Nevertheless, as a whole, the changes didn't have the desired effect. Chelsea upped the tempo but once again contrived to waste a handful of chances. Villa, meanwhile, hung tough at the  back and continued to wait for the inevitable openings to come. The first of two in quick succession arrived after 83 minutes and thanks to some woeful communication/positioning by our central defensive pairing. John Terry drifted inside. David Luiz, meanwhile, just kind of buzzed around with no destination. The result was a chasm of space for Stilian Petrov to exploit. Ciaran Clark fed the Bulgarian who, from the left of the box, couldn't really miss. Three minutes later, Super Frank provided his first real contribution by playing a cross-field pass straight to Ireland inside his own half. Ireland duly took off toward goal, waiting for Cech to commit before laying off to Darren Bent who easily slotted home. What the fuck?

All that was left to do was wait for the final whistle, and then proceed to bicker on Twitter over the state of the club. Some want AVB's head; others, like me, are hip to the difficult task the man has at his feet. What AVB supporters and haters at least can agree upon is that this has been a wildly disappointing start to a run that was supposed to offer hope. We've now conceded leads in three of our last four matches, all three of those against distinctly average opposition. Instead of looking at nine points from games against Wigan (a), Fulham (h) and Villa (h), we're depositing two into the season's account. Winless in four? Everyone deserves part of the blame, too. It's time to sack up, take responsibility and attempt to rectify the issues in front of us. Thankfully, this glaringly bad run of form comes just as the transfer window opens. Now, as you know, I don't condone reckless spending. But what this does represent is the opportunity to potentially go out and find a creative compliment for Mata. Lord knows we're desperate for an elite passer in midfield.

Too bad we can't find one in time for Wolves on Monday.

I have more musings at my disposal, but can't figure out how to express them without coming off as a disgruntled little bitch. More on that later. For now, I just ask that we all remain behind Villas-Boas. Let's ride this out, I still think he'll come good. Carefree.