Share All sharing options for: FIFA 12 And Chelsea FC

I'm not going to sit around telling you guys that I'm some sort of FIFA expert, because I'm totally not. In fact, I'm pretty sure I'm a better defender in real life than my little FIFA avatars can manage at the moment. But I blog, and this is something to blog about - so let's talk about how Chelsea look in EA Sports' newest release, FIFA 12*. And I guess we can also talk about how the game plays as well.

*NB:  EA did not give me a copy to review, which makes me cranky.

Right, I may not be good at FIFA, but I can make neato charts. Here're EA's ratings for all of the Chelsea-owned players in the game, with the exception of Yossi Benayoun because I forgot that he existed (sorry Yossi): 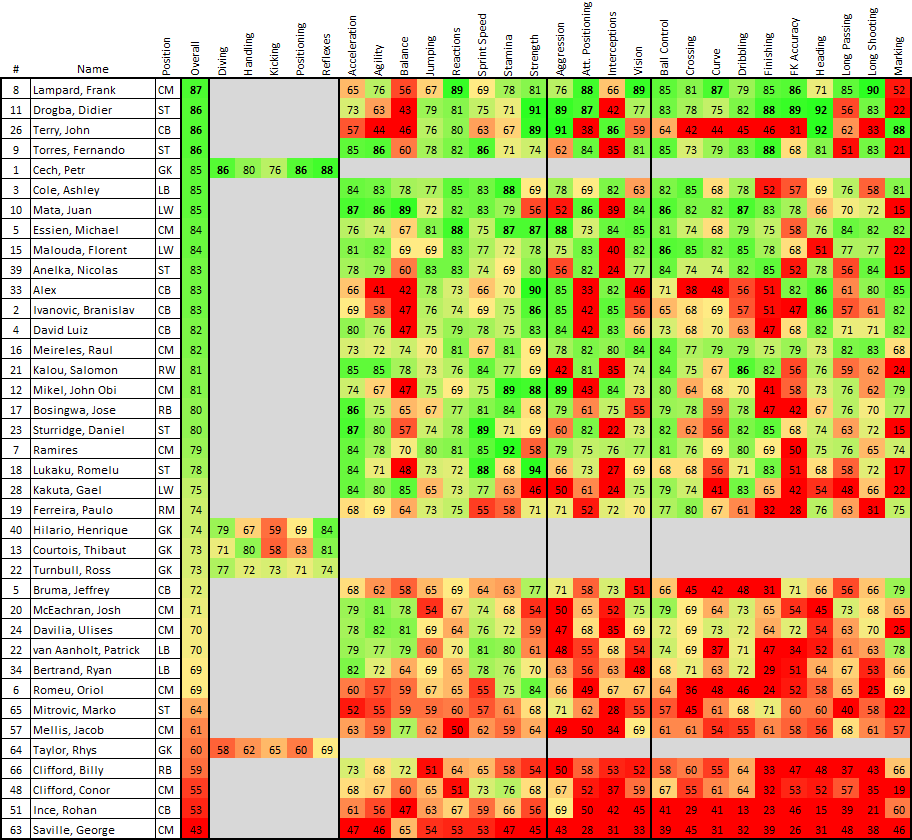 Click for full size if that's a little too unreadable for you. Anyway, that chart has basically every attribute in the game for each player. There are some weird things going on here that I figured I should flag.

In general, Chelsea are a very good team and their star players get a bonus just for being stars. Yeah, some players strike me as way too low (Ramires, McEachran) and some way too high (Lampard, John Terry, Michael Essien), but we know how big a role reputation plays in these games, so it's difficult to get cranky about inaccuracy.

Like I said, I'm not a FIFA expert, although I did play a lot of FIFA 11, so I have a baseline to comparing things to. The biggest difference between this year and last is the relative size of the pitch. In the previous incarnation, the lack of space (especially in the centre) made it very difficult to do anything without running straight into an opposing player, which was compounded by the difficult of dribbling past people*.

*If you're me and therefore not very good.

FIFA 12 seems to have fixed most of this, and the game feels a lot more like actual football. That's a good thing, although the tradeoff is that defending is no longer 'charge at opposition player and make angry noises until they fall down, invariably dragging your defender down in the process and causing a ten-second impasse'. Instead, EA have introduced what they're calling 'tactical defending', which I like the sound of but is something approaching impossible in practice. It does mean that positioning and timing and organisation are much more important than they ever were, but we're not used to dealing with that sort of thing in a video game, so it's very difficult to get used to at first. Conversely, dribbling is much easier now, which means there're many more options in the attack for you to play with.

The collision engine is also much improved, meaning we don't have to deal with random tackles causing injuries and players being knocked all over the place for no reason. Now the force of a collision is reflected in how the game plays out. This is good, because FIFA 11's sucked.

I still can't make passes go where I want them to with 100% accuracy, but I'm assuming that this is because I am terrible at the game rather than being a flaw on EA's part.

Manager mode has also had a major overhaul and is absolutely amazing now. Wage numbers still aren't particularly accurate, although they've made an effort with contract lengths to reflect new signings, but there're many new options and features, including the return of scouting, a youth academy, and a far better transfer window system.

Anyway, if you thought FIFA 11 seemed too arcadey, this is probably for you. I already like it a lot more than the old version, despite being pathologically incapable of winning a match.

PS: You can turn off Clive Tyldesley. Thank god.