It ends a draw in Spain. It shouldn't have. Not by a long-shot. More, after the jump: 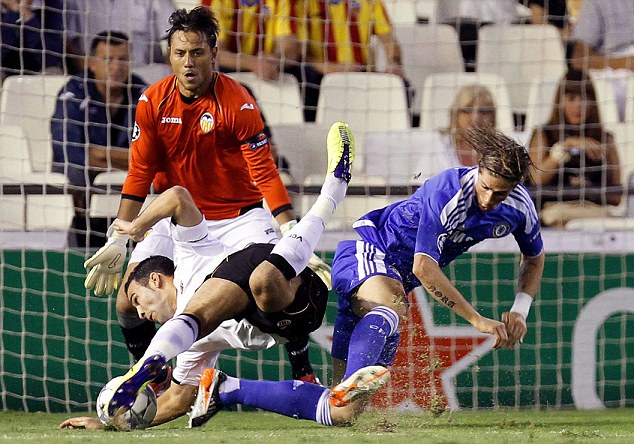 "Fernando, meet the pitch. You'll be spending loads of time down here tonight..."

Well, that was about as bad as you can play over a 10 minute stretch now isn't it? After bossing the majority of the match, taking the lead behind a peach of a Frank Lampard strike from just outside the box, Villas Boas got it all wrong with his substitutions and ultimately cost us a win. Replacing Frank, who was in good form mind you, with a low-on-confidence/looking-like-a-forlorn-puppy Kalou was foolish. Brazen, perhaps. But this was not the only mistake incurred on a night that should have tilted our way from the onset. Nay, this was the final error in an otherwise forgettable night that featured a litany of missed chances, some brilliant saves by both keepers, a few close calls, physical play, defensive lapses, and yeah, that damn penalty. I don't have the stomach to recall the first 80 minutes, particularly the first 45- which were about as drab as possible. So I'll try and make this as concise as possible...

So basically, we played hard for 86 minutes and then everything sort of collapsed. We lost our composure. I can't even bring myself to look at the stats nor the passing charts just yet.