Chelsea walked away from the Mestalla and the toughest match of their Champions League group stages with a well-deserved point, although the nature of Valencia's equaliser will have left many Blues fans furious. Chelsea may have deserved a win - certainly the hosts were exceptionally lucky to have exceptional performances by goalkeeper Diego Alves and referee Nicola Rizzoli - but they gave up enough chances that Valencia was bound to take one of them in the end, even if their goal came about under somewhat unorthodox conditions.

Andre Villas-Boas is no stranger to surprising personnel choices and opted to go for a new-look front line of Florent Malouda, Fernando Torres and Juan Mata. It was an interesting response to the problem of getting Malouda on the same pitch at Mata, Frank Lampard and Ramires, although it's not clear at all whether it was the right move. John Obi Mikel started in the holding midfield role, with David Luiz coming in at centre back for Branislav Ivanovic in what was otherwise an entirely normal Chelsea back line.

Unai Emery's Valencia used the same trick they pulled against Barcelona in their 2-2 draw against the European champions ten days ago, putting two defensively minded players on the left side in order to interfere with Jose Bosingwa going forward. It seemed to work in negating Chelsea's right flank, but in the opening stages the hosts were weak enough through the middle that it didn't seem to matter - the Blues were carving them open like a hot knife though butter and were only a poor Torres touch (or possibly a referee more inclined to give Chelsea penalties) away from going 1-0 ahead in the 5th minute.

That blistering early onslaught didn't last, and Valencia began targetting the fullbacks with long diagonal passes - a trick that works well when both Jose Bosingwa and Ashley Cole are being caught up the pitch all the time - and began to get a foothold in the match, with Sergio Canales particularly impressive in the centre (Ever Banega was doing a reasonably good job as well).

In truth, the first half was fairly poor from both teams' perspectives. After that bright start, Chelsea never got going, and Valencia's threat was limited to floating long passes in the vague direction of their forwards, with Roberto Solgado mostly out of things. Of course, excessively negative play was more or less ideal for Chelsea, because securing a draw at the Mestalla meant that they would have escaped a particularly dangerous fixture with minimal damage. Still, it wasn't very entertaining, and having no cushion whatsoever meant a solitary defensive mistake could spell bad news bears for the team.

With that in mind, one assumes, Chelsea began the second half on fire. While they had started the opening period in strong fashion as well, they hadn't fashioned many clear-cut chances. Here they managed three in quick succession, with Alves pulling off miracle saves to twice deny Torres, who looked distinctly annoyed at the Brazilian goalkeeper: 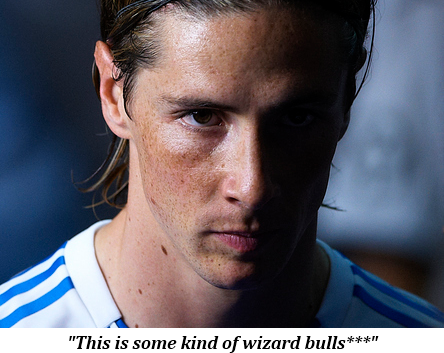 Fortunately for Chelsea, they had Frank 'Wizard-killer' Lampard on the field, and the midfielder was on hand to rifle home a Malouda cutback from the right (he and Mata had switched sides) that I'm fairly confident was accidental. Alves had no chance whatsoever, and Chelsea were up 1-0*.

*I guess this is a good time for the aside where I excoriate the media for making up a Frank Lampard controversy and then saying he had answered doubters. Dear national media: You are almost universally hit-seeking storywhores who deserve to stand in the wall against Hulk free kicks from now until the end of time. Shut up about controversies when nothing is happening.

Of course, in opening the game up, Chelsea left themselves exposed as well, and several Valencia chances were thwarted by the titanic figure of Petr Cech/the hand of raw and fickle luck. The Blues were not defending well at all, with Ashley Cole and John Terry both underperforming and Jose Bosingwa being himself - Mikel and David Luiz were doing all they could but the line was repeatedly exposed by Valencia whenever they had possession.

Eventually, substitutions were made - Raul Meireles came on for Ramires, Nicolas Anelka for Torres, and Salomon Kalou for goalscorer Lampard. The final one would come back to bite Chelsea in a big way, as Kalou, normally hard-working and effective in the defensive phase, screwed absolutely everything up by punching a corner away in the 85th minute. The ball would have landed on his head.

Soldado sent Cech the wrong way, and Valencia were suddenly even. Then things got very weird. Chelsea nearly responded instantly, with Kalou slipping fellow substitute Anelka through on goal only for the French striker to be denied by some more wizardry courtesy of Alves, who cackled with glee and boiled up some sort of potion shortly thereafter.

Oh, and then Malouda was fouled in the area and given a yellow card for diving, and after time ran out both Juan Mata and Ashley Cole were shown yellow cards for no reason at all. No biggie, Mr. Rizzoli. Chelsea fans are notoriously kind to referees that screw them over in the Champions League, after all.

Not that the blame lies at Rizzoli's feet, mind - the Blues were wasteful in front of goal and gave Valencia too many chances to get back into the match, eventually shooting themselves through Kalou's moment of utter idiocy. I was annoyed at Kalou when it happened, and I'm still pretty grumpy about it now. Oh well.

I'm not grumpy in the least about the result. Getting a point out of the Mestalla is more or less perfect, and if Chelsea can grab six points off Genk (given how well they did against Bayer Leverkusen today, that's not going to be too easy, mind), it's more or less job done. The Blues are still top of Group E, and their most difficult match is behind them. For a game that we were unlucky not to win, that's not bad going, eh?