Putting the misery that was the weekend in the rear view, Chelsea begin their League Cup campaign with a home fixture against West London neighbors Fulham. Those sodding neighbors. More after the jump: 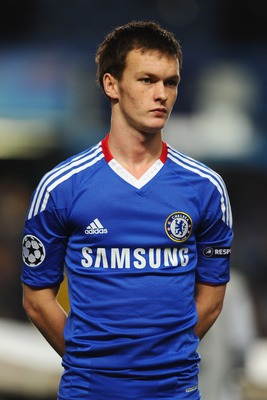 On paper, this is simply a Third Round League Cup fixture against a quality opponent that can certainly cause the Blues trouble. In reality, there's enough subtext to suggest that this fixture is as much about moving forward as it is about blooding the youngsters. Last year, Carlo attempted to try the same approach, but the club were unceremoniously eliminated by a Newcastle side many of us took for granted. You'll recall, this was the fixture that sent us on our tailspin last term. We cannot afford to begin another slide this early in the campaign, and you'd expect AVB will be planning to mix youth and experience for this first foray. On to the specifics:

Why: As stated above, it's time to put the weekend behind us for good and get back on a winning run. The Carling Cup was the first trophy secured under the Mourinho regime, and I'm fully expecting AVB has designs on capturing this trophy by January. Also, we're in the running once more for a quad, and we may as well make our intentions known with a resounding win against a Fulham side depleted from their Europa League excursions.

Team Sheet: In his pre-match press conference, AVB made mention of resting several regulars, while offering a life line to a number of the younger players in the current first team. Romelu Lukaku, Oriol Romeu, Josh McEachran, and Ryan Bertrand have all been confirmed by Villas Boas to be featuring for some degree of time, whilst Didier Drogba makes his return to the bench after missing three fixtures in the wake of his Ruddy-sustained concussion. Hilario remains a question mark, so it may well be RAWSE's opportunity to step between the sticks. There are no other injuries of significance to report, other than the long-term absence of Michael Essien.

The Formation: Much has been made of AVB's tactical adjustment in the second half of the United duel. Opting to deploy a 4-2-1-3, the side showed more bite in attack and a better flow in the final third. I would be thrilled to see the club take this shape from the start, and provided they do, would expect to see the following lineup: 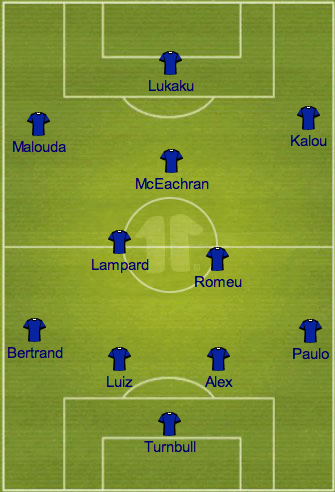 Now this is what I'd anticipate tomorrow. Frankie, who got a 45 minute shift over the weekend, should slot in on the left side of the double pivot with Romeu, while Paulo gets the nod over Bosingwa, Alex and Bob hold the middle down in JT and Bane's stead, Bertrand gets the start on the left for the very much in need of rest Ashley. Now, up top, I'm anticipating Josh to fill the slot alongside Flo and Sala, both of whom haven't had much in the way of opportunities for some time now. At the forefront, Belgian big-boy Lukaku gets a run out from the jump to see what he's made of. Give Lamps the armband, and let them play.

But then again, you never really know with AVB. He's tinkered with formations, rotations, players and positions so often now in a quest to find the perfect formula. I'd anticipate tomorrow to be no different. There'll be some new faces which should hearten those of us that have openly pined for youth for years now. I think even the most brazen of expectations, however, needs to be tempered in this case. This is not a guaranteed win by any stretch, even if Fulham are missing a few players. At the moment, Martin Jol has confirmed the desire to freshen up the mix, resting Brede Hangeland, Danny Murphy, and Clint Dempsey. Also out due to injury are Aaron Hughes, Bjorn Riise, and Rafik Halliche.

With Fulham producing a quality draw at Craven Cottage over the weekend against a phenomenally sharp Manchester City outfit, nobody should take this game lightly. But, I believe we have the depth of coverage across all positions, and high quality youth prospects in this first team that we should feel confident taking a gambit and throwing a couple of these players into the frying pan. I'd expect McEachran to garner a full 90, along with Bertrand. Romeu and Lukaku may well get substituted, but so much is left to be discovered about all four of these men.

My expectations are muted, but I'm anxious to see our approach in the first 45 minutes. And what of Fernando Torres? Many would assume that he'll automatically drop to the bench for this match, but there's the distinct possibility that AVB elects to start him once again, in search of redemption and on the assumption that he'll kick-on and bag another goal in his quest to rebuild his confidence/reputation. We saw flashes of brilliance from the lad at Trafford, and a few roll-back-the-clock moments that reminded all of us why we overspent on his services in January. If he can put the horror of that miss in the bag, remember that sensation that propelled him to net that lovely chip finish over De Gea, and shows as much intent as he did in the second half, there's no reason to assume he won't get another shot. Between this match and our weekend fixture against Swansea, there exist two real opportunities for Fernando to get rolling before the matches get more complex.

Based on that assumption, don't be shocked if AVB decides to roll out a 4-1-3-2, with Romeu holding up play, Florent, Josh, and Frank in the trident, and Lukaku partnering Torres up top. Either way it goes, I'd just like to see us produce a comprehensive display of attacking football, minus what are rapidly becoming major defensive lapses. So long as we elect to play a high defensive line, we can't complain for conceding on the counter attack. But that being said, we still need to stick to our principles and defensive game plan, and we can't throw it aside just because there are three minutes remaining in the match. We concede far too often at the beginning and ends of halves. We need a sustained effort in order to win this game, and in order for us to generate confidence to push forward.

As always, we want your thoughts. A lot of you chimed in on Jack's post earlier, but feel free to dissect my ramblings, or add your two cents on what may well transpire. Rant box will be live tomorrow.