Obviously, I don't have access to the same sort of neato tools for the Champions League as I do for the Premier League. Until the Guardian expands Chalkboard analysis to European tournaments, it'll be really hard to produce the same sort of stats-heavy match analyses for these matches as I do for domestic games, which means I'll have to a) improvise and b) use my brain, rather than having the numbers as a crutch. Uh oh.

Andre Villas-Boas deployed Chelsea in their normal shape - sort of. Frank Lampard was benched and so Florent Malouda was the most advanced midfield player, and whenever a flank-first player plays centrally, they have a habit of getting into more comfortable positions out on the wing. We see this fairly regularly with Malouda, and if anyone recalls the space Yuri Zhirkov liked playing in when used as a central midfielder - i.e. not central midfield - well, he did it a lot too. Raul Meireles was a more central player, partnering John Obi Mikel with Ramires suspended.

The attack was the much vaunted combination of Fernando Torres, Juan Mata and Daniel Sturridge, widely suspected to be the 'best' lineup for getting the 50M striker to score goals. At the back, John Terry was rested completely, meaning that David Luiz, recovered from his knee injury, made his first appearance of the season as a left centre back.

Robin Dutt didn't make too many surprising changes to Leverkusen, fielding more or less the same team that had hammered Augsburg 4-1 the weekend prior. The only exception was the replacement of right midfielder Renato Augusto with Andre Schurrle. Michael Ballack played in the hole, while Lars Bender and Simon Rolfes acted as the double pivot in the 4-2-3-1.

Normally, one might expect a 4-3-3 vs. 4-2-3-1 battle to be very clogged up in the centre and decided down the flanks - Chelsea's two advanced midfielders and one deep cancelling out Leverkusen's one advanced and two deep. Thanks to the inclusion of Malouda, something slightly different happened here.

Malouda's habit of playing so much on the left hand side essentially left Chelsea with a two and a half man central midfield, with Mikel staying very deep and Raul Meireles playing a box to box role. Malouda was essentially detached from the centre, putting pressure on the middle when Leverkusen were in possession but supporting Ashley Cole and Juan Mata when the Blues had the ball.

Three players on the left side vs. Leverkusen's two ought to have led to plenty of overloads on that side, and Cole pinned back Schurrle for much of the match with his attacking menace. However, most of Chelsea's creativity was in the centre anyway, because Mata was constantly drifting infield to link up with Meireles, Chelsea's best player of the first half and the only link with the otherwise isolated Daniel Sturridge on the far right.

The system stayed more or less intact throughout the match, with Villas-Boas making three like-for-like changes - Frank Lampard for Meireles, Nicolas Anelka for Sturridge, and Alex for David Luiz. Only Anelka made much of a difference, as he made himself far more available for passes than his predecessor, allowing Chelsea to take advantage of Leverkusen's need to press forwards and leave the space behind left back Michal Kadlec open.

Dutt, on the other hand, was forced into a series of changes throughout the match. Sidney Sam and Schurrle switched wings at half time, presumably to let Schurrle have a go at the relatively lethargic Jose Bosingwa on Chelsea's right, but when Leverkusen went behind following the straight swap of Ballack for Augusto, Dutt first switched to a 4-4-2 with a front pairing of Stefan Kiessling and Eren Derdiyok (Derdiyok having come on for Sam) and then eventually withdrawing Lars Bender from the double pivot and putting a left-sided midfielder, Hanno Balitsch, on in his place. If it looked easier to slice through Leverkusen towards the end of the match, that's why.

Mostly, the shape changes were reactive - Leverkusen threw on attacker because they needed to score and Chelsea's defence was looking leaky. Since the Blues didn't seal their win until the very last minute of the game when Mata made it 2-0, it was very much a gamble worth taking for Dutt.

The narrative after the match was that Fernando Torres, who got assists on both David Luiz's and Juan Mata's goals, had had a good game. This is probably true, albeit with several caveats. Torres had several good moments (even if the rather spectacular assist #2 turns out to be a little bit lucky on replay), but he also had some embarrassing failures in front of goal and some bad giveaways in the midfield.

I re-watched the match earlier and took note of every time Torres touched the ball, and a few things stand out, so I'll give you some bullet points, because I'm lazy:

Despite the assists, in other words, I wasn't particularly impressed with the way Torres played. Some of that was to do with the way Leverkusen gave him space in certain useless areas, but much had to do with his complete failure to take chances when presented with them. One of the few remaining arguments with which to defend the striker was the fact that he simply hadn't been given any real chances to score so far this season. Against Leno, he was presented with one that I would have put in the net, and he fluffed his lines. That's not a good sign.

Also, although it's obvious that he, Meireles and Mata are a wonderful combination, Sturridge is not the answer to the creativity problem on the left. He's an out and out striker that gives us speed and an absolute nose for goal on that flank, but for his many assets he hasn't been an instant dollop of creativity (finishing style aside!) like Mata has. That's hardly his fault, but it does temper my expectations somewhat, and make me wonder if a Mata-Torres-Anelka partnership might be superior against defences that need to be whittled down rather than backheeled apart. 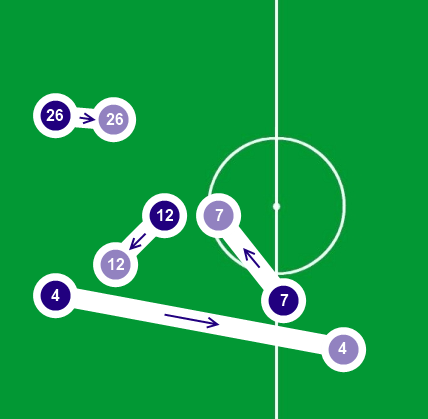 Figure 2: Midfield movement required for a centre back run forward in the pivot.

You've all heard of the double pivot that exists in a 4-2-3-1, where each midfielder in the band of two takes turns going forward in order to provide adequate cover in the back at all times while maintaining the ability to make surging runs forward. What should also be obvious that that that concept can, with a little bit of tweaking, be made to accomodate surging runs forward from centre halves.

With respect to Thomas Vermaelen and Manchester United new boy Phil Jones, Chelsea have the best attacking centre back in the Premier League in David Luiz. They also have him partnered with John Terry, whose ability going forward is the one thing about the England/Chelsea skipper that's actually underrated. With those two behind John Obi Mikel, Andre Villas-Boas has the option of stationing another central midfielder slightly deeper and unleashing his centre backs up the pitch - see Figure 2 to the right.

Why would you want to sacrifice a midfielder into the holding role to allow a centre half to break forward? Simple. Part of what makes David Luiz such a dangerous attacking player is because he's just not supposed to be where he is, and he's already built up a full head of steam by the time he's got there*. He's a good finisher and passer and has the sort of ball control that makes even the trickiest of wingers cry, but most of what made that run and goal work was that nobody really knows how to pick up a centre back that has just run half the length of the pitch into the penalty area. And you thought defences had trouble with tracking Frank Lampard!

*Which is why he'd be worse at attacking if he was moved into defensive midfield, even in a 4-2-3-1. Whether it'd still be worth a switch is debateable, though.

Anyway, Villas-Boas was pretty clear that he was going to use the David Luiz option as a way to break down opposing teams, and it's a wise move by the manager. I might be the worlds biggest fanboy here, but it's undeniable that his play, defensive errors aside, has the ability to invigorate teams in a way most defenders simply can't. The ability to use David Luiz as a legitimate attacking option is a very good argument for a midfield that incorporates John Obi Mikel, who's better equipped than any other player on the roster for covering the Brazilian's forays up the pitch.

Despite the Fernando Torres issues and the difficulty Chelsea had creating chances for much of the first half, this was the most complete game of the season so far, and it comes against the highest quality opposition. Most of this can be attributed to the two newcomers that took the field against Leverkusen - Raul Meireles and Juan Mata were both excellent, and Meireles' move higher up the pitch allowed him to serve as a left-right link that Chelsea were missing at Sunderland. Mata was also far better at 'horizontal' movement this time around, without either losing their ability to contribute to quick penetration on the vertical.

Out of the three major problems that Chelsea faced, only one is a purely tactical issue. The shaky defence came because Branislav Ivanovic and Jose Bosingwa were having off days and David Luiz is a crazy man, but that back line is unlikely to feature in important games too often, so we shouldn't be concerned until a John Terry-David Luiz pairing looks this vulnerable. Torres is what he is right now - making him right will require more than just a tactical shift to give him more chances.

That leaves the isolation of Daniel Sturridge, which has now persisted for two games (or, if you like, 100% of his Chelsea career under Andre Villas-Boas). The fact that Sturridge has played extremely well despite rarely being involved is a testament to how good a footballer he is, but I can't imagine that the manager's plan was to have a quick-passing team that mostly fails to make use of their right winger. Sturridge's current play doesn't mesh up with Chelsea's at all, and it was no coincidence that the team got much better when Nicolas Anelka came on to replace him in the second half.

There are two solutions here - either Sturridge is benched or he's moved infield in order to force him into action more. The latter option requires Jose Bosingwa to improve over his last two performances (both of which had Sturridge as a starter, which I'm not sure is a coincidence) and so it may well prove easier to temporarily had the right wing job over to Anelka, at least for the Old Trafford match.

All in all, a good game and a great start to Chelsea's Champions League campaign, but as ever, there are questions left unanswered.