Fernando On The Ropes

Share All sharing options for: Fernando On The Ropes

This was originally going to be a three-part piece on life, liberty, and the profligacy that once defined the career of Fernando Torres. But then I read the news, and checked Twitter to find that everyone is mouthing off about Fernando supposedly mouthing off in a Spanish paper about his teammates. Then comes an admission from the club that they're "investigating" the interview to determine what, if any, actions will be taken to reprimand the unsettled Spaniard. More after the jump: 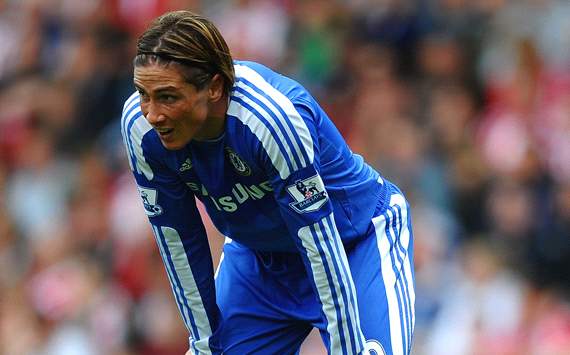 Over the weekend, we were treated to Fernando's most excellent bitch-face. As he sat in seething silence alongside his teammates, his scowl growing by the minute, the crack commentary team shoved in our faces courtesy of ESPN 2 went on in great detail about Fernando's lack of touch, inability to connect with his teammates, his poor confidence levels, and how the pressure of being the most expensive transfer in EPL history was weighing on him. In his brief cameo at The Stadium of Light, Fernando looked out of sorts. As the game closed, with a brilliant 3 v 1 possession swinging Chelsea's way, he somehow managed to shank a pass well beyond the reach of Ramires (no small feat in and of itself), and proceeded to receive a round chorus of jeers and boos from both Sunderland and Chelsea fans alike. Not good.

Then comes word this morning that Nando's gone all bitch McNasty in the press. Supposedly, he gave an interview to La Liga's official website last week, in which he ripped (I'm using that term loosely) his 'old' teammates for being 'very slow' and not 'playing more vertical football'.  Now, does anything in that sentence really shock or offend any of us? We as fans have been pining for more youth in the ranks for at least five years, and have openly dissected the lack of flair, pace, ingenuity, and creativity in the side for what seems like centuries. It should come as no surprise to anyone with a pulse that we might be one of the most frustrating sides to watch, given that we can move the ball laterally for days on end, but never quite execute the passing acumen necessary in the final third.

Look, I'm all for a good scandal or something salacious to sink our teeth into, but this is just stretching at its finest. There's nothing in the interview that suggests Nando is spitting venom towards any of his teammates. The idea that calling players 'very slow' is offensive is, albeit somewhat snarky, but not an indication that he's fallen out with anyone. You only need to watch one match this season to realize that guys like Lamps are a step slower then the competition. But the assertion, which this interview puts forward, that these issues are what have prevented Nando from reaching the pinnacle of his capabilities, is absurd.

This has been magnified and blown up in the press as a tipping point for catastrophe. I would say lets all take a collective breath and sort the facts out. Nando called some players old- there's nothing false about that. Nando called some players slow- there's nothing false about that also. Nando feels the signing of Juan Mata was a necessity- there's nobody supporting the club that would disagree with that fact. The touchy-feely amongst us don't like the fact that Fernando said some of the guys were a step off the pace. Yeah, I can see how that would rile a few feathers. But lets be real here, this is not affecting team chemistry or camaraderie amongst the guys. They're paid professionals, and if they can withstand the shit storm of legit controversies we've faced over the years, I'm pretty sure a Nando interview that skews on the salacious side isn't going to wind them up.

The point is simple. Fernando, stop worrying about dropping quality sound bites and focus on your form. Earn minutes, score goals. No excuses, no bullshit. Play and prove a point. Stop trying to make excuses for your form, if that's in fact what you did. If you didn't, and this was all concocted by some overly enthusiastic interviewer, then lets leave this matter to be and hope you can step it up regardless. That 50 million price tag may not help matters, but the excuses are running thin. Tomorrow and Saturday present two brilliant opportunities to demonstrate a level of quality that's been visible in flashes thus far. Take them, and run with it. Then watch, and read, and see what people say.