Two of the three Blues Brothers meet at Ibrox in what no doubt will be an excellent, festive way to close the preseason. I'm looking forward to this one. 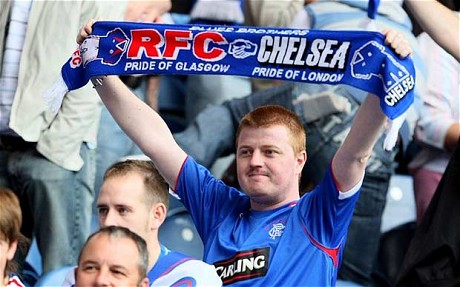 I've always liked Rangers. Great club. For us to complete our preseason schedule in Glasgow, then, is a welcome sight.

There is a great history between these two sides. Many of you may remember, or, like me, have read about, the now famous 1985 fundraiser friendly for the Bradford fire disaster. A host of Rangers supporters made the trip down on short notice, just days following the tragedy at City stadium. The story goes, at least the one I've heard, that the two sets of supporters quickly found common ground, enjoying a glorious time degrading their respective rivals (oh yes). The Rangers support was even given a standing ovation as they exited the ground, though I understand police were in the mix in case of upheaval. Of course there was none.

Thus a great platform was established between the clubs. The last time the two met was in 2007, a
2-0 setback for Chelsea in which Steve Sidwell featured. Yes, Steve Sidwell.

What to expect this time around? Well, a preseason debut for our Brazilian contingent for one. Very nice. And maybe another win. Carrying this momentum into next week's league opener would be superb.

See you guys in the morning (10am EDT) for a very friendly rant. KTBFFH