The reserves literally just wrapped a 1-1 draw with Blackburn at Stamford Bridge. Somewhat unlucky, too. It was a solid performance from the guys, Mellis with the goal. Anyway.

At halftime, sporting director Michael Emenalo spoke to ChelseaTV. He offered some good insight into what to expect from some of our high-profile youth players that are currently on the fringes of the first team. We should expect some significant movement over the next day and a half. 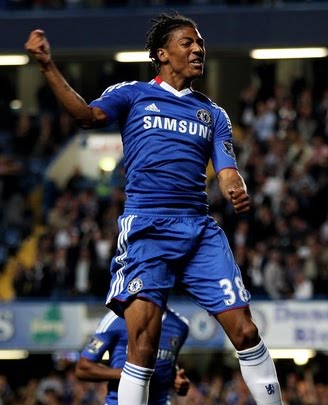 • We pretty much already knew this, but Josh McEachran will not be going out on loan, despite the player's earlier request. The 18-year-old, who has yet to feature for the first team this season, is said to be "one of the big boys," according to Emenalo. We agree.

• Gael Kakuta is tired. The 20-year-old has been on extended leave for rest after his participation for France in the FIFA U-20 World Cup. A loan move is expected to be announced very soon.

• Patrick van Aanholt and Ryan Bertrand are also expected to secure loans before the transfer window closes. Though I think we all would agree that both are capable reserves for Ashley Cole, Emenalo said he thinks the two young fullbacks would benefit more from playing a consistent number of first-team games for another club rather than earning a sporadic look at Chelsea at the moment.

What can we decipher from this? Well, the first thing that jumps out at you is loans for our two reserve left-backs. That kind of talk from Emenalo makes this on-again, off-again move for Alvaro Pereira much more reasonable. If those two move out, we'll definitely need cover on the left side - be it Pereira or other. That being said, I would reckon that if we don't end up with Pereira one of PVA/Bertrand will be staying.

Kakuta isn't really a surprise. Somewhat disappointing that he's yet to be able to lock down a spot among our first team, but he needs game experience somewhere. Like we said earlier, the news on McEachran is hardly a surprise, either.  Now to get him some game time.