Is this highly tattooed Portugese midfielder about to be pseudo reunited with Andre Villas-Boas? 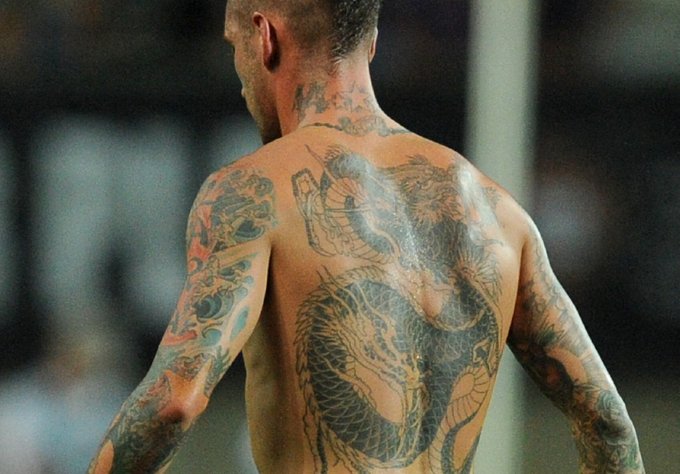 Year of the Dragon

The Telegraph among other sources - newspaper, Twitter and the like - have reported throughout the day that Chelsea have had a bid of around £8 million plus Yossi Benayoun for Raul Meireles rejected by Liverpool out of hand. To be honest, I find this one a bit weird.

As Jamie told your earlier, Yossi has been dicing out hints of an exit from Stamford Bridge for a while now. I think it's pretty safe to say we all expect him to depart by Wednesday's deadline. To Liverpool, though? Liverpool have been rumored as one of the interested parties, but that seems odd considering Benayoun lobbied for a move away from the club back in summer 2010. Where does a disgruntled 31-year-0ld creative mid fit in on Merseyside? Then again, Arsenal are said to be interested in the player, too, so who knows what's going on.

Meireles, meanwhile, has been loosely linked with a move to Chelsea for some time now. Though the player moved on from Porto before he was able to really sit down and become a trusted crony of Villas-Boas, the coach is said to be a rather large admirer of his. Cool. It's also been said for a minute that Meireles is ready to leave Liverpool, with Kenny Dalglish's plethora of summer signings leaving him pretty much out of the picture as a concrete first XI selection. Meireles is a solid player and would be a very nice addition to our midfield. He's far from an elite guy, but he will provide service for Fernando Torres as he likes to get the ball moving about. Good range of passing, too. And then there's the tattoos. He brings those as well - bonus.

Nevertheless, I'm not sure how I feel about a deal. The Telegraph reckons we'll come back with an improved offer, but I think the current one tabled, at least for me, is about the ceiling from our end. Maybe a few more million, but nothing more. Of course, Liverpool sympathizers reckon Meireles is worth two to three times what we offered. They'd like us to throw in Daniel Sturridge, too. And, yeah, that's fucking laughable.

Another thing that's clear is that Meireles wants football, and I'm not sure we can give it to him. We do need midfield help, sure, but Meireles isn't the kind of guy who's going to be an instant name on the teamsheet for Chelsea. How is that any different from his current situation? He would no doubt help us out, but we need a true game-changer alongside Ramires. Meireles, I'm sorry, is not that man.

So, in conclusion, this looks a poor move for all parties. Liverpool don't want to sell, and we shouldn't be inclined to waste silly money on a 28-year-old with a three-year shelf life tops. Just play Oriol. Plus, there are far better options out there for us at the moment. Paging Douglas Costa.