At the close it looked easy enough. There were goals. Celebrations, too. The kind of win we should be recording against newly promoted sides at home if we are indeed harboring aspirations of another Premier League title. In truth, however, this was far from a convincing display. Much work is left to be done.

Hey, at least we have this Juan Mata kid, right? He might be pretty good. 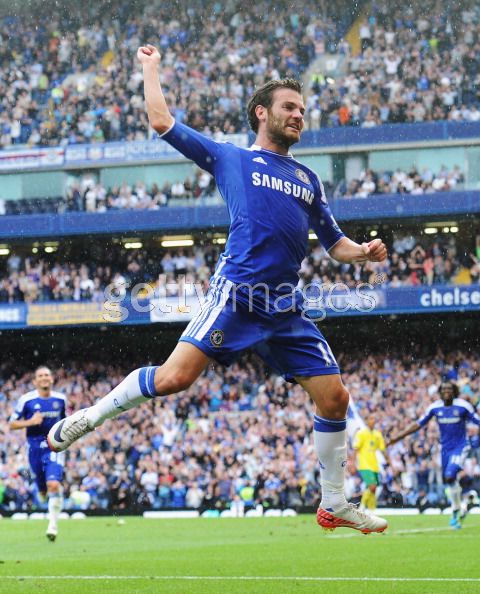 Goals from the reborn Jose Bosingwa - an absolute screamer inside six minutes - Frank Lampard (82', penalty) and Mata (101') were enough for Andre Villas-Boas to record his second successive home victory. It must be said, though, that Norwich City proved worthy adversaries and, via a goal from Kevin Davies v2.0 - Grant Holt (63') - nearly managed to escape Stamford Bridge with something tangible.

The Rundown
Yeah, it's back - for better or worse
• We won, but more is required.
• Ramires for man of the match. Tireless display. An absolute joy to watch the Brazilian.
• Defensive frailty. Where is it coming from? Bane was woefully off the pace, while Terry was average in execution. No communication from the two, either, which may be more worrying. And then there's Hilario - mucks up another solid shift with a glaring gaffe. Disappointing all around.
• This Jose Bosingwa. Where did he come from? Whoever he is, I'm glad to have him. Player of the season thus far?
• Juan Manuel Mata. So good Devin has already been seen wearing his No. 10 around Stamford Bridge.

Of course Holt's leveler arrived only through some truly laughable defending, hilarious really. A mess from Bane coupled with some of that vintage goalkeeping from Hilario - you know the shite which manages to erase all the good work he's known to do - resulted in the first of two key collisions on the day and a cock-up of a goal conceded. Who woulda thought it?

You were angry. Then, just a few minutes later, you were speechless as Didier Drogba lay unconscious after losing an aerial dogfight worth of a place in Battle of Britain with Norwich goalkeeper Kimbo Slice. Talk about street brawling. Jesus Christ. The keeper, real name John Ruddy, clobbered Drogba, catching him with his left elbow and instantly knocking him out. Drogs fell to the pitch stomach first. Thud. He remained out for some 30 minutes. I don't know about you, but I never thought I'd ever see Didier Drogba in such a state. It was truly scary. Luckily, the Ivorian sustained only a mild concussion and should be fit sooner rather than later. Superb news.

Anyway, as for the match. Things look bleak as the seconds ticked away, that was until we were bailed out by a couple of youngn's and one (really) old head. On 70 minutes, a double substitution saw Nicolas Anelka replace Drogba and Mata on for his Chelsea debut in place of Florent Malouda. A reversion to traditional formation fare, 4-3-3, followed and we looked far more fluid and threatening.

There was an immediate impact from Mata, who, while positioned on the left of the front three, was given the freedom to roam all over the pitch. He popped up on the right, linking well with Anelka early. Less than a minute later, he beat the Norwich fullback on the left, in the process delivering a peach of a cross onto the head of Torres, whose header was unfortunately too close to the goalkeeper. Good signs.

Then, on 80 minutes and just prior to the introduction of Romelu Lukaku, came Anelka's decisive contribution. Mata sparked a counter with a neat chip out from our own penalty area. The Frenchman latched onto the Spaniard's pass, and smartly held up play against two defenders before playing a incisive ball between a trio of Norwich players for the onrushing Ramires, who looked as if he had been shot out of a cannon. Ramires held off a challenge to his left while pulling the ball forward from under his feet and, just as he was preparing to strike, was upended by Ruddy. Concrete penalty and a red card for the goalkeeper. Game-changer.

Frank buried the penalty and on came Lukaku for Torres. A flurry of chances followed, including a desperate miss at the back post by Bane, who, as mentioned earlier, was weirdly poor for much of the day. Despite this, we looked cool and in control. Lukaku was fitting in well, a real battering ram on his debut; Mata, meanwhile, was displaying the flair we've all so desperately longed for.

Eleven minutes into added time - yes, 11 minutes - Mata sealed it with a goal on his debut. A wretched back-pass from United on-loan defender Ritchie de Laet, his second thus far this season, was easily picked off by Mata, who then side-footed a shot under new keeper Declan Rudd for our third. Cue the celebration. It was the second latest goal in league history.

Etc.
A quick word on Norwich. Well played. I wasn't overly impressed with them at the start, their 3-5-2 morphing into five in defense whenever we were in possession. But a forced substitution very early on saw them move to four at the back, and, from thereon, there just about gave as good as they got. Except, of course, for possession (71 percent to us) and goals. The visitors, in particular, showed some of that smart football they're known for and were quite dangerous as the first half came to a close. They survived our early push in the second, and were rewarded with Holt's equalizer. Down to 10 men, though, they never stood a chance. Fair play to them, though. They may well find a way to stay up this season.

Tactically I won't offer too much on us. We opened the match in an marginally-surprising 4-1-3-2 with Drogba and Torres partnering each other for the first time in a millennia. It didn't really come off, mainly because of the lack of service for either of the forwards. Yes, we still lack a creative midfielder. Drogba-Torres can technically work, of course, but I'd much rather stick with the 4-3-3, especially considering what we've seen of Mata in such a short amount of time. Adding the directness of Daniel Sturridge on the right - his suspension now over - and leaving Torres through the middle seems the logical move at this point. Then again, I could be totally wrong - usually the case.

That's all I got for now. I'm sure I've missed something so feel free to have a deserved go at me or, better yet, politely offer your opinions/viewpoints in the comments section below. I leave you with this heady chalkboard courtesy of the Guardian showing off the impact Mata was able to have versus that of Malouda. Heady indeed.