As it turns out, Luka Modric tried to sit out Tottenham Hotspur's home match against Manchester City earlier today, only to find that Harry Redknapp had other ideas:

Redknapp: "Luka came to me at 11.30am & said to me, 'I don't feel my head is right today'. I said, 'I feel you need to play today, Luka."less than a minute ago via Twitter for BlackBerry®

And fair enough, too - Modric is still a Spurs player and should be playing for the club, but using him in a midfield pairing with Niko Kranjcar worked... well, not at all. City pretty easily overran Spurs, outpassing them by a decent amount at White Hart Lane during the 66 minutes Modric was on the pitch (he was replaced by Jake Livermore with the score 4-0).

Many are accusing Modric of having a bit of a stinker, and there were a chorus of boos around the stadium when he was brought off, but I was watching the match and he seemed decent enough - if a little rusty - to me. Let's take a look at how he did today and what he might offer to Chelsea. 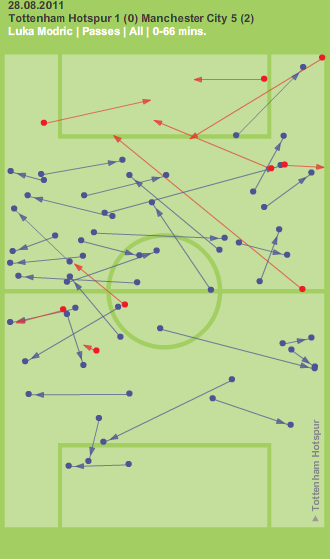 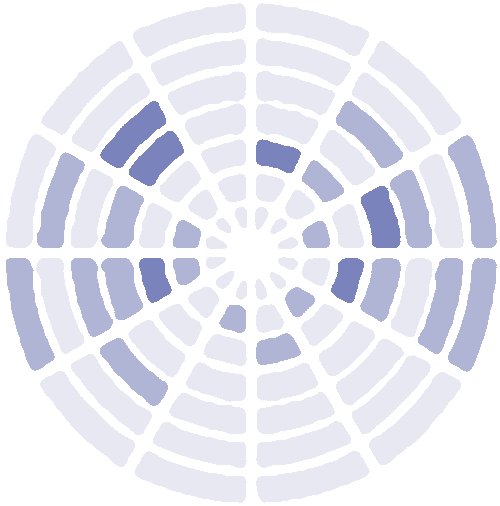 Of course, raw statistics don't tell the whole story of just what Modric would bring to the table if he joined Chelsea, which is why we have awesome graphics to play with as well. On the right we have passing charts for Modric against Manchester City today, the first being a pretty standard Guardian Chalkboard affair and the second a radial passing map with 30° segments and five yard rings.

Looking at the chalkboards for Modric's passing, it's pretty clear that he fulfills a role that Chelsea have some need for - a roving midfield creator. That's kind of a loaded word, but the point is that he's the sort of player who can come in and offer himself up for passes pretty much anywhere in the first two thirds of play.

Defence needs to play the ball out? Modric will show up and move possession forwards. Midfield in trouble? He'll be in the right place at the right time for a quick one-two. Today he played as part of a midfield two behind Rafael van der Vaart and on the left, but he's more than happy roaming wherever help is required.

Could Chelsea use a player like that? Certainly, although they'd then lose some of the drive forward through their midfield - Ramires and Frank Lampard were both very good at pushing forward against Norwich City on Saturday. But the pair were also somewhat dubious when the Canaries were on the ball, and Modric offers something in the way of possession and defending that neither of the aforementioned Chelsea players can do.

So, while the Croatian may not be the best tactical fit on the team, he still fills an important need in terms of making the game flow. The appearance of Juan Mata showed us how stodgy our play has been, and the reason  the Blues would want to add Modric to the ranks would be to loosen things up a bit and move everything faster. And that, of course, is why Tottenham are so adamant that they're going to keep him.