"I want to come to England to win trophies and that's why I accepted Chelsea's offer. It was also a question of sporting achievement, not money. Arsenal and Tottenham were both interested in me but they did not compare with the Blues. I want the Premier League title and this is possible at Chelsea." 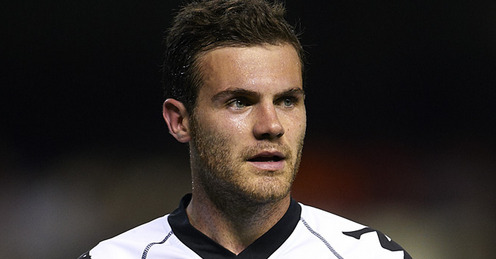 His continued roller-coaster talk of Luka Modric has been incessant. He hasn't a clue if the Croatian is leaving. He expects him to stay. He wants Daniel Levy to work out a treaty. Whatever.

Prior to Tuesday's match at Old Trafford - one in which Spurs played fairly well early before capitulating in vintage fashion - Harry decided to take a pot shot at our latest signing, Juan Manuel Mata. As you know, Tottenham were very much interested in the Spanish attacker, but couldn't close a deal for the 23-year-old. Same as Arsenal.

"We were in for Mata and close to doing a deal. But he didn’t come and Chelsea came in," Redknapp said. "Obviously they can blow you out of the water wage wise, and then he changes his mind and they get him. It’s all about wages."

Mata must have caught wind of Harry's drivel (probably not).

He did, nevertheless, offer up his reason for choosing Andre Villas-Boas' project instead of the Arse or Spurs. You saw the quote that lead this piece. Shots fired. He also went on, singling out both AVB and Fernando Torres as key factors in his decision.

"Fernando Torres helped influence my decision but speaking directly with Villas-Boas was the decisive factor. He explained how his style will be based on 4-3-3 and how important I will be to his plans.

"Frank Lampard is a monster of a footballer to play alongside and the prospect of that is incredible."

As if most of us needed another reason to like this kid, he goes out and provides us with these gems. Looks as if he'll fit right in. Welcome, Juan. We're looking forward to you unleashing some of your more exceptional skills against the likes of Spurs and Arsenal.