I assume that, like us, you've been patiently waiting for some new developments in the abduction of John Obi Mikel's father. Well, we have received some great news today: Michael Obi has been recovered, a bit battered but alive and well after police raided the kidnappers' den Monday. 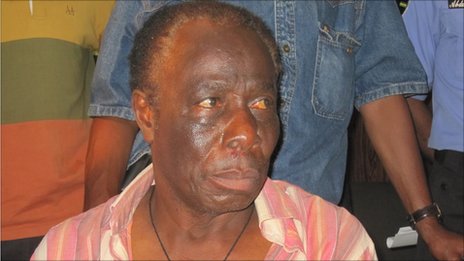 Michael Obi speaks for the first time since his abduction.

So, after ten days in captivity - Mikel's father disappeared Aug. 12 - we can finally put this horrible saga behind us. More significantly, John can move on from what has had to be a tormenting ordeal - one that he has seemingly, at least on the field, dealt with superbly. Unbelievable really.

As for today's news. Officers moved on an area in the Nigerian city Kano, where they found Mikel's father and arrested five suspects (four men, one woman) related to the kidnapping.  Michael Obi, sporting bruises and general nicks as you can see in the photo above, spoke to reporters tonight, describing the terrifying events.

"I started begging them but they beat me mercilessly. They kept me in a terrible place," he said at his press conference reports BBC Sport. "I was taken right deep into the bush, in an isolated area in Jos.

"There are five of them and they were dressed in military uniforms. They pushed me into a vehicle painted in military colours and began to drive very fast. I never knew a vehicle can fly like that."

Horrible. It's not entirely sure whether ransom money was ever exchanged - that seemed to be an intriguing side story, with Mikel's mother denying contact was made with the abductors four days ago - but I would assume that if it has it would be recovered and returned as well.

Mikel's management company, Sport Entertainment & Media Group, released a statement earlier today in which they offered this: "Earlier today Michael Obi called his family to advise them that he had been released by his abductors. John Obi Mikel would like to thank everyone in Nigeria, his family and friends, Chelsea FC and their fans and his agents for their total support during this terrible time."

Chelsea released a statement of their own as well.

"All at Chelsea Football Club are delighted that John Mikel Obi's father, Michael, has been found safe in Nigeria. Mikel has shown outstanding commitment and professionalism during this most difficult of times, and the club will continue to offer its full support to him and his family.‪‬‬"

As I said earlier, it really is great to have this all behind us now. We at The CO would like to wish Michael Obi a swift and full recovery. We also trust the Mikel family will be able to move on just as fast. Our thoughts are with you.