It's time to do a goal by goal of Chelsea 2-1 West Bromwich Albion. We didn't get to do one of these last week thanks to the scoreless draw at Stoke, but one of the best ways to really understand what's going on in a match is to draw up specific sequences, so we try to as much as possible. Since I'm busy and/or lazy, mostly we just look at goals. Most of the diagrams come in multiple parts - you can just click through them until the end.

Chelsea contrive to kick off the match by immediately going down by a goal, and it's ex-Reading striker Shane Long, who also scored against Manchester United at the Hawthorns the week prior, who nabs it.

Having pushed the ball forwards only to see it returned rather aimlessly to his feet, John Terry doesn't see anything open (Ashley Cole is covered by James Morrison) and so passes sideways to Alex. The Brazilian has a square ball to right back Jose Bosingwa, but that doesn't help Chelsea out at all, so he doesn't take it.

Instead, Ramires runs back from the midfield to give his compatriot another option, with Somen Tchoyi in close attendance. Alex immediately passes to the Chelsea number seven, who is trying to shake Tchoyi and orchestrate a one-two that'll see Chelsea... well, not really do much of anything. There'd still be nine Baggies outfielders behind the ball.

Anyway, his attempt all goes a little bit wrong and his pass back to Alex is way overhit. Long has been waiting for a mistake and runs onto the misplaced effort, getting there before the defender and managing, somehow, to push the ball straight through him. Alex looks as though he should be able to recover, but he's outmuscled by the striker, who proceeds to race straight into the penalty box, chased by Terry and Ramires in addition to Alex.

Long gets to about ten yards out and clips the ball past a helpless Henrique Hilario at his near post, the goalkeeper guessing the wrong way. It's quite a good finish, and the goal was in no way Hilario's fault. Blame lies on Alex and Ramires, the former for being so easily pushed around and the latter for deciding that playing a risky manoeuvre with a centre back was a good idea.

West Bromwich Albion left back Nicky Shorey receives a pass from Youssouf Mulumbu just inside his own half, with James Morrison close by. Chelsea's Ramires is also very close, as is Nicolas Anelka sitting just behind Morrison.

Elsewhere, Chris Brunt and Frank Lampard are marking each other in the centre, while Gabriel Tamas is watching Fernando Torres, who is loitering in an offside position. Both Jonas Olsson and Steven Reid are more or less free.

Shorey dailies in possession and is caught by an absolute peach of a tackle from Ramires. You can watch that thing several times and not really figure out what's going on, but Ramires essentially goes in to early, almost ends up scissoring Shorey, but recovers in time to stop his back leg cutting the fullback down and instead pokes to Anelka with his left.

Once Anelka gets the ball, everyone goes off to the races. Shorey, Brunt and Reid all end up in the area at about the same time as Lampard, while Anelka has stayed wide. The striker fires in a hard cross that Lampard does well to control, but as the 33-year-old is trying to move the ball through the crowded area, he runs into Olsson and falls over. It may well be a penalty, but instead of protesting Chelsea get on with it - the ball has rolled to Anelka and he takes quick advantage of the Baggies' mental slip - the visitors have taken a crucial half-second to plead their case to Lee Mason rather than actually play football.

Mason waves play on, Anelka weaves into the box, wiggling past the still confused defence, and hits a low shot towards Ben Foster's back corner that's going well wide until Olsson's heel deflects it just inside the post. In terms of credit, you'd have to give this one mostly to Ramires - Anelka's finish was lucky, Lampard's pass was no pass at all. An individual error on Shorey's part combined with some poor luck as far as West Brom are concerned are the key factors here, however. 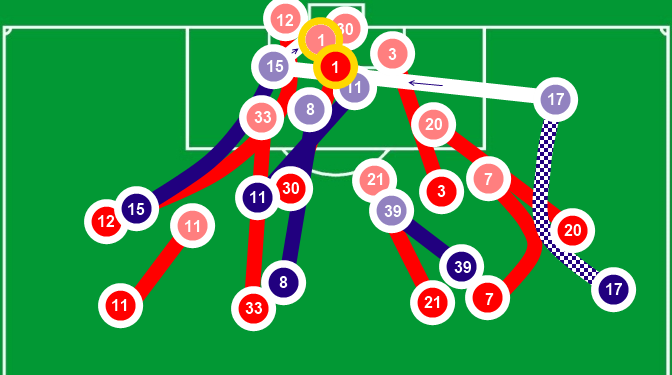 At long last, we have a good team goal. Chelsea have possession in their own half on the left side but using Ramires as a pivot quickly shuffle the ball over to Jose Bosingwa on the right. Only Bosingwa and Lampard are advanced enough to support the strikers, while West Brom have two banks of four defending.

This should not be any sort of problem for the visitors - five on eight doesn't usually favour the attackers, but they're actually stranglely vulnerable on the left side, where Chris Brunt isn't doing much of anything, leaving the trio of Steven Reid, Paul Scharner and Gabriel Tamas against Florent Malouda, Frank Lampard and Didier Drogba respectively. There's an opening there then, if Bosingwa can push the ball left.

He can, drawing Nickey Shorey and James Morrison into a foolish double-challenge, skipping past both of them and finding himself in acres of space. Jonas Olsson can't close him down, so he has plenty of time to pick out a cross through a crowded penalty area that Florent Malouda converts at the back post. A very well worked goal - the key was West Brom's rather weird marking (three players in Anelka's general area vs. three to cover the rest of Chelsea's attack?) and Bosingwa's ability to beat his men down the right to find time for himself to cross the ball properly.