A competitive home debut is at hand for our suave, animated (see below) leader. Chelsea host the Baggies at Stamford Bridge in Saturday's evening fixture. 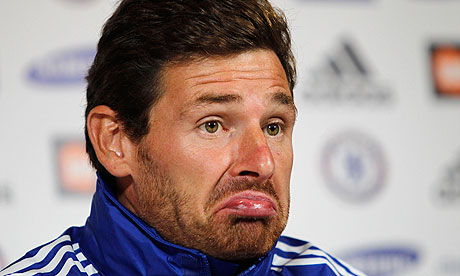 Why: A point at the Britannia may have been half-acceptable - not according to Villas-Boas, though - but a similar result tomorrow will hardly be peachy. In fact, maximum points from our next two fixtures, both favorable match-ups at home, is the minimum expected. Six from six ahead of trips to the Stadium of Light and, more significantly, Old Trafford is a must you would think.

Team sheet
Pretty straight forward. They aren't many key decisions to be made here. Injuries, for one, have taken any sway out of the hands of Villas-Boas.

Our latest debacle, a month without Petr Cech, is of course a massive blow. Still, Hilario has never really been a poor reserve goalkeeper. Aside from his nightmare in our a 4-2 defeat at home to Manchester City a few years ago - which was egregious to be sure - he's been fairly solid for us. Certainly not great, but serviceable nonetheless. You would hardly realize that, however, as he continues to be a consistent target for supporters. I reckon we should direct most of that venom toward the artist formerly known as BAWSE, but maybe that's just me. Anyway.

Also unable to feature against West Brom will be David Luiz, tendinitis of the knee continuing to bother though him AVB said he should be back in full training at the start of the week.  Worrisome. Daniel Sturridge, of course, is still suspended.

The only real question is at right fullback. Does Villas-Boas continue with Jose Bosingwa, who to be fair was pretty damn good at the Britannia, or does he revert to the stoic assassin, Branislav Ivanovic. I expect the Portugese to remain amongst the starters, leaving Bane on the substitutes bench for the second successive game. He could theoretically come into central defense, but why pull Alex who was excellent against Stoke City?

Still, despite a seemingly easy choose, Villas-Boas could spring a surprise or two. We know he's adaptable, so what's stopping him from featuring Didier Drogba on the right of our front three? We're already pretty fluid up front, so why not allow The Mighty One an opportunity to cut inside and interchange with Torres when needed? Our Ivorian also has the delivery necessary to be effective out wide. Why not? Bound to be a far better option than Salomon Kalou. Do it.

Florent Malouda may have been the worst of the lot last week, but I can't see him being dropped. He will, however, need to improve and quick. These Juan Mata rumors are heating the hell up.

I must say, I'm also interested in seeing who is included on the bench. Both Romelu Lukaku and Oriol Romeu are available for selection. Two defenders in Paulo Ferreira and Bane? Josh McEachran and Yossi Benayoun, surely, but then that would leave out one of Kalou, Nicolas Anelka or Lukaku if Paulo and Bane are included. Lots to decipher there.

Hodgson was quite clearly out of his depth on Merseyside, but has slid in seamlessly at The Hawthorns since the dismissal of Roberto Di Matteo, now our glorious No. 2. Roy just has a knack for getting more out of less.

You know what to expect from him. A somewhat cautious approach, with an emphasis on defensive solidarity. They were fairly good, if hardly spectacular, in their season-opening 2-1 loss to Manchester United. Expect a 4-4-2, with new signing Shane Long spearheading with Peter Odemwingie still nursing an injury. Still no Graham Dorrans, though, I bet. Roy needs to find a place for the the underrated Scott if you ask me.

Though West Brom will probably still attempt to suck the life out of this one, they likely will play with a more attacking mindset and keep the ball on the ground far more than Stoke would ever think of doing - a welcome sight for us. I reckon they won't have a prickish chauffeur for our goalkeeper, either. I'm talking to you, Ryan Shawcross.

Stat(s) of the day
We have won all 10 of our league matches against West Brom, conceding only three goals. Drogs has netted eight times in seven league games against WBA. So, yeah, that's promising.

What to expect?
Well, hopefully a continuation of the improvement made during the second half against Stoke. Some fluidity and far more lethality in front of goal. Maybe some better service for Fernando Torres. If so, I think we can expect the Spaniard to open his season account. With the rumor mill flaring, perhaps players will feel the pressure to perform in the idea that their spot in this team is not even close to being secure (Flo?).