Share All sharing options for: Marca: Valencia reject bid from Chelsea for Mata?

Ignore Rudy and the Barca v. Madrid love-in. Check out that little nugget in the bottom left corner of the cover. That's what we need to be concerned with. 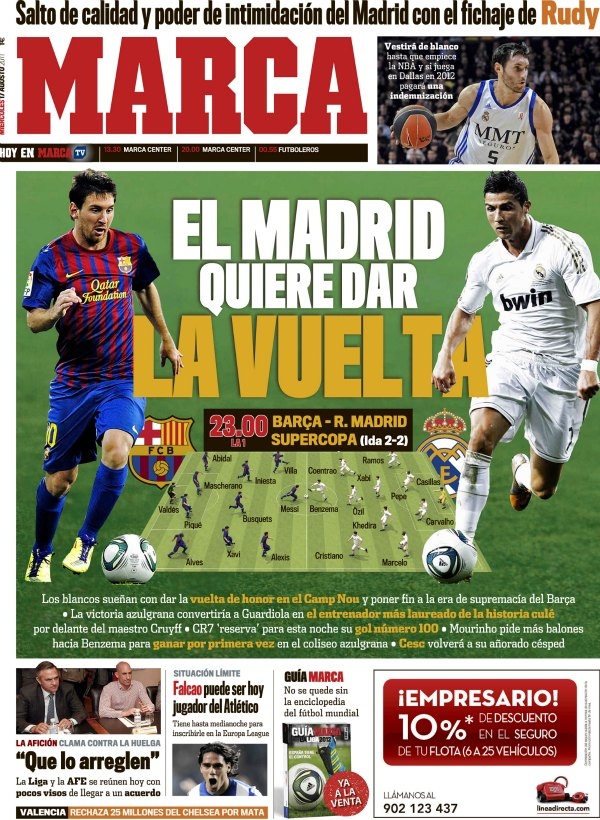 While today's front of Marca focused on this small matter of a Spanish Super Cup, rightfully so, there was some information on a potential bid from Chelsea for Valencia winger Juan Mata. It was around €25 million and was rejected, as the bats are holding out for a cool €30m.

Guillem Balague spoke on talkSport later today, saying that "Valencia are expecting a big bid from Chelsea for Mata." I assume he's speaking of an improved off from us. OK then.

Well now we have an update on the Marca website, with a video piece headed by some prose that seems to suggest that Valencia are very much open to selling Mata - not just to us I'm thinking as Arsenal are also said to be interested in the 23-year-old. They say the "soap opera" regarding the player was basically over until we threw our hat into the mix. Do we believe them? Not on your life.

Anyway. I've seem him a few times and represents a nice option. Not exactly a true winger, but a highly talented offensive player who can provide versatility across the front. Great movement and vision, sort of in the David Silva mold. But that's just my opinion, though. I'm more interested in what you think.

So, what are you thoughts? Do you even think we are in for the player? Let me know guys. Further, if you have more info on the potential transfer let it fly. We'd be most appreciative. KTBFFH