Well, the opener's out of the way. Chelsea didn't exactly set the world on fire against Stoke City at the Britannia Stadium, but they did manage to come away with a point and a fairly good performance against a side that caused a lot of teams (including us) problems last year. How'd things go down at the Potteries? Thanks to hours of rebuilding spreadsheets that I've somehow lost, I can now make a stab at answering that for you. Formation chart after the jump. I've missed saying that.

As expected, Stoke ran with a 4-4-2/4-5-1 hybrid that focused on lobbing the ball to Kenwyne Jones or Jonathan Walters and exploiting the knock-down to try to win set pieces. Their defence was very narrow, essentially creating a situation where there were four centre backs capable of dealing with Chelsea's attackers - exploiting the Blues' lack of width was instrumental in keeping the visitors off the scoresheet.

Chelsea lined up in a 4-3-3 with John Obi Mikel as the lone holding player with Ramires and Frank Lampard ahead of him. Nothing unusual there; it's the same shape that we saw for most of last season. Jose Bosingwa started at right back, giving the team more of an attacking flavour on that side than we're used to, but the most important change Andre Villas-Boas made for his first real match in charge of the squad was to deploy Fernando Torres as his centre forward. He was flanked by Salomon Kalou on the left and Florent Malouda on the right.

The wide forwards were supposed to be working with the fullbacks to drive inwards, creating space on the overlap or beating their defenders to get into the box. Let's see if that worked. 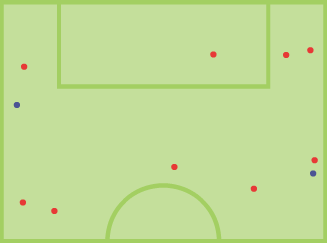 In a word: No. Oh, you want more words than that, eh? Well, Kalou and Malouda were ball-losing machines who a) couldn't really get down the flank and b) couldn't get into the box anyway. Chelsea's surges forward were courtesy of Torres, Bosingwa and Ramires, not the wide forwards.

Kalou is getting a lot of flak for his poor play - and let's be honest, it was mostly pretty dire, but Malouda might actually have had the worse game overall. Neither did much of anything on the attack (although Kalou really ought to have scored when set up by Torres in the second half, and was less involved in overall play), but at least the Ivorian was getting back to help out Bosingwa whenever Stoke threatened.

No such help was forthcoming for Ashley Cole when Stoke moved down their right in the first half, which was something that occurred with alarming frequency. Malouda's refusal to help his left-back out left Cole completely overwhelmed (and more or less helpless) when Jermaine Pennant and Jonathan Walters combined to overload the flank. All of Chelsea's defensive issues before the break - there were none in the second half - were at least partially because of the lack of support on that side, and that falls pretty squarely on Malouda's shoulders.

Frank Lampard also had a poor game. Unlike Kalou or Malouda, however, this probably wasn't his fault - Torres was the centrepiece of Chelsea's attack, and his requirements in a central midfielder are fairly well documented: Not Frank Lampard. Although Torres played well, even at his best the Spaniard doesn't really ever generate the sort of pullbacks that Lampard feasts on, and the England midfielder wasn't particularly helpful with the buildup play either. Cue a lot of standing around doing nothing from him.

The match got far better in the second half, at least as far as the Blues were concerned. The main catalyst behind the shift from an even game to Chelsea dominating was Cole's newfound ability to get forward. With Bosingwa always a threat on the right side, Stoke were now forced to defend against threats all over the pitch, and retreated into a tight defensive shell, unable to do much for the rest of the match. Two substitutions helped Chelsea a great deal: Matthew Etherington was forced off with what appeared to be a dislocated shoulder, replaced by the less vivacious Dean Whitehead, and Nicolas Anelka came in for Malouda, which was a bit of addition by subtraction.

Chelsea's best spell of the game came in the ten minutes after Anelka's introduction, capped by the French striker hitting the post after a fantastic save from Asmir Begovic. Then Villas-Boas rolled the dice once more, throwing Didier Drogba into the fray for Kalou as Chelsea shifted into a loose 4-4-2 diamond, with Anelka floating behind Drogba and Torres. It didn't work, and although the visitors were still dominant, the game lost of a lot of that 'impending goal' feeling with the formation switch.

If that was Villas-Boas' best idea in terms of how to play his two star central men at the same time, he probably needs to re-think it. It didn't work for Carlo Ancelotti and probably won't work for him. That's not really a knock on the new manager, of course - Drogba was an obvious introduction at that point of the game - but I had hoped that with Stoke playing very narrow, Chelsea could have done more with wide play while fielding the big man up front. Perhaps building Torres' confidence was worth it, though.

I don't think we've ever done a full analysis post for a Stoke match before, for various reasons, but I was struck by how ridiculous the passing comparison was over the course of the match:

In all of my years several months of looking at passing numbers, I've never seen anything quite like that. Even when a team is mauled, there's almost always a point in time in which they're getting the better of things. Not so with Stoke. In the second half, the Potters managed to complete just 65 passes (Chelsea managed to match their entire post-break output by the 63rd minute). All in all, Stoke managed 144 completed passes. Chelsea? 396.

Ten Chelsea players, including their goalkeeper, completed more passes than Stoke's finest. Glenn Whelan found the target with 22 of his 32 attempts, while a fairly poor performance from Frank Lampard saw him finish with 52 of 66 complete. The individual passing chart is actually pretty instructive - probably the most important aspect of the match from an 'in the future' perspective was Torres dropping deeper than we're used to from our centre forwards and getting involved in build-up play. It was nice to see, and his stats reflect that. Oh, and Kalou's passing was appalling. Maybe he was worse than Malouda after all.

Anyway, if Stoke weren't passing it... what were they doing? The answer: punting the ball forwards. A lot. I guess a punt is technically a pass, but it gets the job done with far less overall effort (I wish I had average length of passes attempted, because I bet Stoke's would be very high). Let's take a look at the location chart to see just what was going on:

The headers tab is probably the most interesting, because it reveals that an astonishing 19 of 25 aerial duels were contested in the Chelsea half, primarily by Walters and Jones. Stoke really were just playing long-ball bonanza at the Britannia on Sunday, and despite the early stutters, Chelsea's defence coped fairly well: It's more than a little telling that Petr Cech only had one save to make, and that was hit right at him from long range.

Villas-Boas had a bit of a go at the refereeing thanks to Ryan Shawcross going all Ryan Shawcross on poor Petr Cech whenever there was a set piece anywhere near the Chelsea box, but all in all Chelsea did a very good job winning headers in dangerous areas. The problem came in the area Mikel should have been dominating in the air. For a midfielder, Mikel is a good header of the ball, but he was overmatched by his opponents here, losing out on every attempt he made to win the ball off the ground and allowing Stoke to penetrate into the Chelsea half.

Anyway, that's the first game of the season all done. Some interesting points, but nothing obvious we can point to as saying that's why the match turned out the way it did. A little bit of luck for Chelsea and we come away from Staffordshire with three points and an impressive win, but it wasn't to be. Ah well, it happens.