Raise the curtain. Hit the lights. Let's get this show on the road - literally. 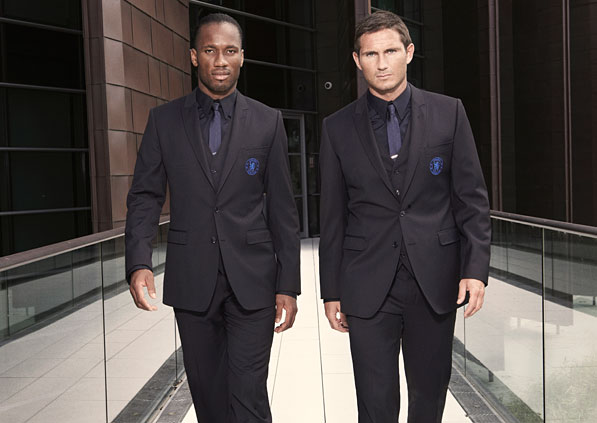 Alright, we made it. Yeah, it's been a pretty meh summer and sure there have been enough rumors and speculative stories to whet your proverbial appetite, but now we no longer have to entertain ourselves with listless journalistic pandering. No, we finally have some footy to enjoy. Provided the rioting stays calm through the night, we will have a kick-off on Sunday afternoon. A kick-off that can't come soon enough, mind you. On to the specifics:

Why: Seriously, no explanation is necessary here. It's opening day, time to put aside the Ancelotti era and embrace the AVB regime. Time to return to our rightful place atop the standings, and time to exorcise the demons of seasons past. Time to start anew. A rebirth? Allegorical comparisons notwithstanding, it truly is. If the pre-season rigamarole wasn't simply an exercise in futility, and was an actual showcase for the tactics and player combinations we can come to expect, then we as fans have plenty to look forward to.

Extending the Streak + Coming Out Swinging

Currently, the mighty blues are on a 9-game season-opening-winning streak. Longer than any other team in the twenty-year history of the Premier League. So, it's natural that we might be a tad arrogant heading into this first match of the year. I would temper any unrealistic expectations to the fact that:

If we're expecting an easy go of it, we may as well drop the charade and get real. Nothing, I mean nothing is going to be handed to anyone this season. No team is going to roll over and kow-tow to the Vice Champions, especially at home on opening day. This isn't to say a loss or a draw would be catastrophic for either team, but it does offer the chance to hit the ground running and set a marker for the coming weeks. Therefore, we must come guns blazing. We need to be faster then the defense is preparing for, more alert in our defensive markings on set pieces, crisper in the tackle, sharper in the passing game, and most importantly, clinical when opportunities present themselves.

Tony Pulis, he of the baseball cap lore, has been busy trying to recruit new players in the summer transfer window. Adding Matthew Upson and Jonathan Woodgate are clear indications that the thirteenth best team last season is serious about fixing it's creaky defense, particularly away from home. Stoke City chairman Peter Coates has confirmed that the club have tabled their 'final offer' for Tottenham duo Peter Crouch and Wilson Palacios. So, THFC fans, if you're reading this, do us a solid and visit one of the Stoke sites to vent your frustrations. We have NOTHING to do with this, not even in the loosest, most tangental of fashions. Get it? Great.

After a week that saw virtually every defender in Blue take a knock, we're glad to report that almost everyone is fighting fit to make the weekend. Fernando might have suffered a concussion in mid-week, but AVB has confirmed he trained normally today and will make the trip this weekend. AVB confirmed the absences of Daniel Sturridge & David Luiz, but made no mention of Alex, Bane, Obi Mikel, or Lamps. So we're to make our most educated guess on their status at this point. So, for the first time this year, we roll our our probable XI: 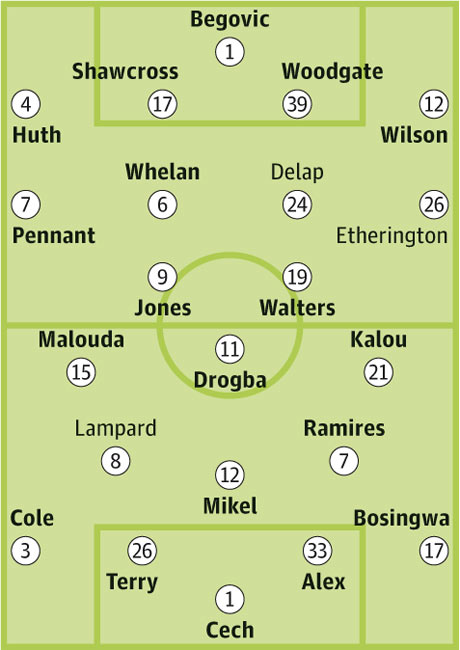 Cheers to The Guardian for their graphic. I would have done my own version, but why bother when someone already put the goods together. For the bench, expect to see: Hilario, Torres, Yossi, Anelka, McEachran, Paulo, Bane.

Enough said. Let's get going and see what this season is all about. As always, KTBFFH.