Share All sharing options for: Modric Still Wants Out

It appears this saga is intent to drag on for at least another two weeks. More after the jump: 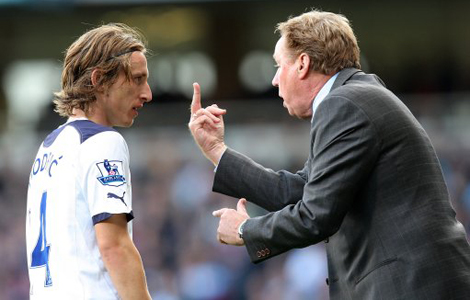 I've just about had it with this one. Despite Tottenham imperio Daniel Levy's claims that Modric will be going, and I quote, "nowhere" this summer, the rumor mill continues to produce stories about his exile from White Harte Lane. Luka, who recently took to the press to vent his frustrations, reiterated his desire to depart, saying that he did not have a change of heart since preseason preparations began. He remains adamant that he would appreciate if THFC would respect his desire to leave, and wants the matter sorted out quickly.

When asked about what's happening with his future, Modric told RTE Sport: "I don't want to talk about that. I said before what I think and that's it. I said a lot of things before and still everything is the same at the moment. I will see - I'm still waiting."

All good and fair. Just buckle up friends, because this one is going to be a drawn-out affair. Remember how protracted Berbatov's transfer to United was? Yeah, that. Plus, the added bonus that we're Chelsea, and therefore the price for Modric is about 30% higher than what any other team would have to pay- by proxy. His teammates, meanwhile, are openly pining for Lil Luka to stick around for at least one more season, with quotes attributed to Rafael VDV on the matter. I'll admit, THFC losing Pienaar does hurt the likelihood of them selling Modric, but if 'arry is successful in capturing Lass Diarra from Real Madrid, then it cushions the departure, so to speak. For a link to the source article, click here.

Update: Here's the audio of the presser from which these latest Modric quotes are being unearthed. Click here to listen.