In the previous post, we took a look at how our model for projecting the Premier League table performed last season, and apart from some weird quirks, I think it's probably safe to say that it seems viable enough to run with this season. Let's take a look at how the model works in general.

Regress goals scored and goals conceded from previous year's data; using -43 goal factor for conversion from the nPower Championship. Last year, we simply used the previous five year's worth of data to come up with a basic regression and applied it. This gave some strange results for Chelsea (Manchester City's weirdness came elsewhere), but for simplicity's sake we'll use the same numbers. Here's the chart: 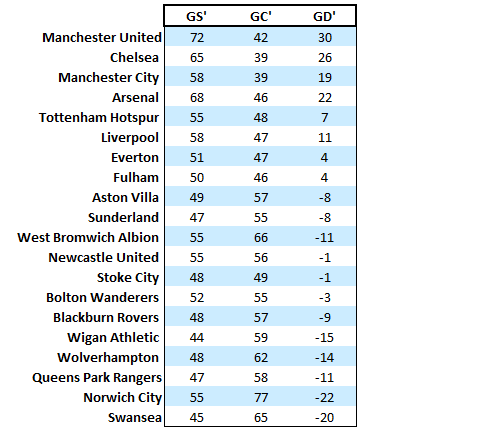 Manchester United and Chelsea lead the pack here, while Arsenal claw back most of the ground they've lost to Manchester City. Liverpool overtake Tottenham Hotspur, while the 'W' teams and the promotees (save Queens Park rangers) all look in real trouble. All pretty straightforward and unsurprising. Onto Step 2 then.

Last year I looked at the relationship between spending and next season goal differential and found a reasonably strong relationship. It's not surprising that it's there, since spending money mostly brings better players in, but it's not a guarantee. This format only allows for numbers to be set in stone though, so hey. We'll roll with it. Here's a straight conversion from spending above average to goal differential (it's about 0.3 goals per £1M spent, if you were wondering): 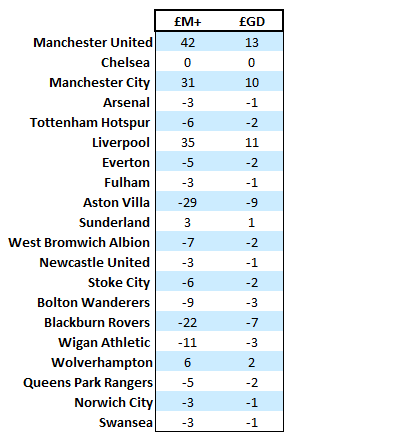 Look at Liverpool, Manchester United and Manchester City's collective spending. That's bad news if you're an Arsenal or Chelsea fan. And since I imagine we're mostly Chelsea fans here: Uh oh. On the bright side, a) like I mentioned above, spending lots of money doesn't mean you've spent it well and b) we're not Aston Villa, so that's a relief.

Let's put everything together! We can take what we've learned to come up with expected goals scored and conceded next season (just split £GD in half and assign evenly), and from that it's a pretty simple step to points, since differential and points totals above average are related so closely. So let's build a table: 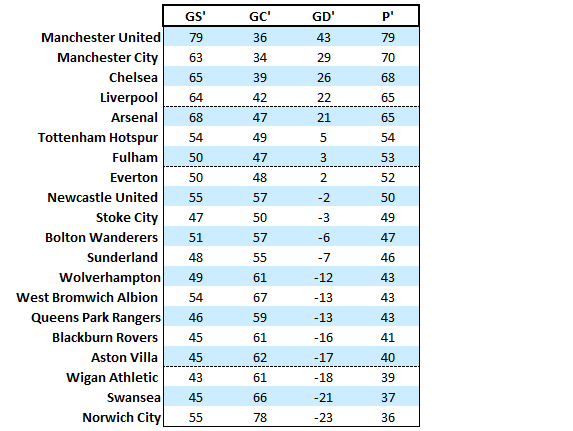 Well that's not great news, is it? Chelsea in third behind the two big spenders, with Liverpool and Arsenal both very close on our tail. The runaway leaders are rather unsurprisingly Manchester United, who are well clear of City as (statistical) favourites to win the league and hold onto their crown. Elsewhere, things are about as expected, although Fulham and Everton being in that tight of a race for seventh would be weird. It looks like a bad year for Aston Villa and Blackburn, but the bottom of the table is so tight that just about anything looks as though it could happen in the last eight slots.

So, in general, more points (fewer draws), because Liverpool are back in the elite by this standard. We have a top five rather than a top four now*, which means more difficult matches at the top, lowering everyone's points totals. With the bottom of the table all equally mediocre, there are also fewer walkover matches as well. While I maintain that I think United are overwhelmingly likely to win this, the upcoming season's going to be be absolutely fascinating as power re-aligns in the league.

*You could also argue that Chelsea have fallen out of the 'top two' with United so far ahead of them.

Anyway, Blues fans - I think we should probably admit that we're underdogs in this fight. That doesn't mean we can't overcome the odds and win a title, of course, but it's going to be a long, hard road to unseat the champions. Let's see what Andre Villas-Boas and company can do to make it interesting.