The Impact Of Luka Modric

Share All sharing options for: The Impact Of Luka Modric

Let's back away from the Luka Modric transfer rumours for a minute and have a think about what bringing the Croatian to Stamford Bridge would mean for Chelsea. That, of course, requires some understanding of how the team looks right now, so let's start there, midfield warts and all. 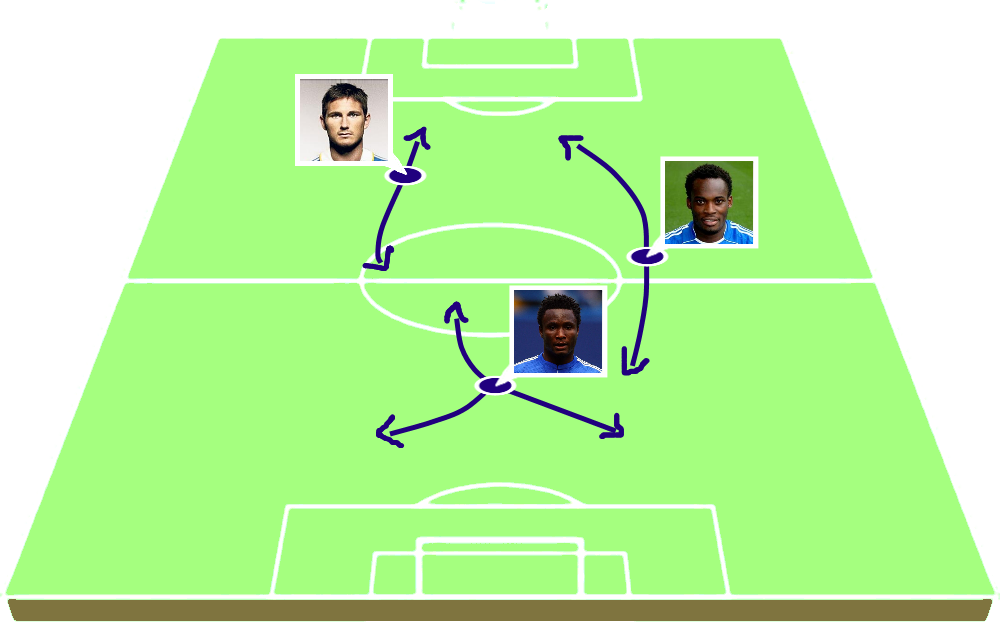 Chelsea, of course, have favoured a 4-1-2-3 for years, basically ever since acquiring Claude Makalele from Real Madrid. The midfield features one defensive player who very rarely ventures forward, and whose job is to win the ball and keep it. Out of all the players on the squad, only John Obi Mikel is capable of fulfilling this role, and even that can be questionable at times.

The two more advanced positions are reserved for a box to box midfielder (typically Michael Essien, although you could probably switch him around with Ramires and nobody would notice) and for Frank Lampard, who is a very rare example of a midfield poacher. Lampard is an expert at using the space between the opposition's defensive and midfield lines to finish off moves, but he's less adept, though still quite good, at creating them.

Chelsea spent most of last season accused of a lack of creativity in the midfield, which is broadly fair. Essien 'creates' via what's essentially a combination of power and speed, and although that's not really what the football-viewing public would describe as creative, it's effective enough when the Ghanian isn't a shadow of himself, which he was last season. The situation was magnified by Carlo Ancelotti being forced to play a struggling Ramires alongside him, which meant Chelsea had two brute force players who weren't really brute forcing anyone in front of Mikel, who for all of his talents is creative like I am a fish.

It's not much of a surprise, then, that the Blues are looking for some help in the middle. Luka Modric will provide that, of course, but it's not entirely clear how that would work. Let's take a stab at sorting things out.

Those positions aren't locked in stone, of course - both Essien and Ramires can play in Mikel's slot, but the listed positions are the best slots for each player. Yossi Benayoun is probably capable of playing in the same place as Lampard, despite the differences in style (this would just mean more emphasis towards goals from the wide forwards and less on those from midfield), but it's less clear where a deep-lying player in the Josh McEachran mould would fit into the 4-1-2-3.

McEachran obviously can't play defensive midfield on his own, doesn't have the power or defensive ability to be a box-to-box player and doesn't have time to work his passing magic high up the pitch. I'd suspect it's this problem, rather than age or any lack of skill, that restricted his first-team opportunities with Chelsea last season. The Blues would need to change their system to make him fit.

Luka Modric is essentially a fully-realised version of McEachran's potential, and that makes Chelsea's chase for the Tottenham midfielder especially interesting. Like McEachran, it would be borderline lunacy to leave him as your primary defensive midfielder (especially with such an attack-minded defence), he's not exactly a box-to-box player, and playing high up the pitch doesn't give him enough space to operate effectively. Instead of the 1-2 midfield, Modric is better suited to one in which the triangle is inverted - the 4-2-1-3. 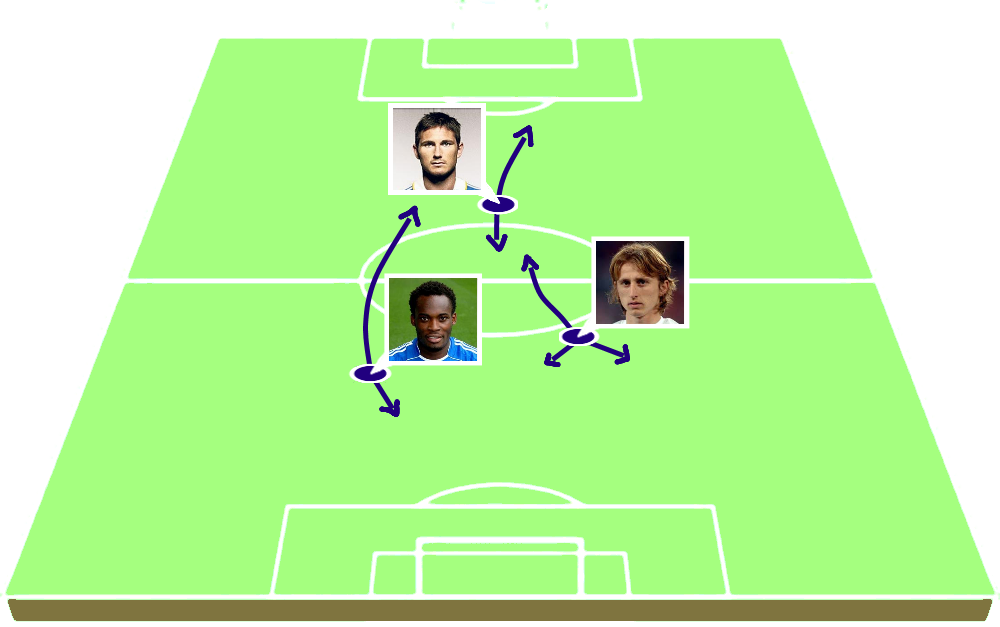 This shape is a different animal, and requires different skills. There's less scope for a dedicated defensive player - two share the demands of that position (this is what people call the double pivot), so a Michael Essien or a Ramires can happily sit alongside Modric rather than using Mikel as a defensive shield. Combining their runs forward with Modric's incisive passing does indeed give Chelsea's attack more heft in the middle of the pitch.

There would be, however, some issues with this alignment. Mikel's discipline, more than anything else, is what allows Chelsea's defenders to push high up the pitch. Ashley Cole, David Luiz and even John Terry like to push forward, and doing so is only possible because Mikel won't. Essentially, Chelsea's midfield right now sacrifices attack from a midfield player in return for unshackling the defence. It's unclear whether that trade-off in a 4-2-1-3 would be worth it, although I suspect such a system would probably mean less David Luiz.

While the first issue may not be a problem at all, the second one certainly is. Chelsea are trying to get younger, not older, and it's pretty clear that they'll have to replace Frank Lampard sooner rather than later. Benayoun isn't much younger, and although Modric still has several years left in him, he'd probably be pushing out Mikel, who's just 24.

I don't think that there's much doubt at all that Modric would be a very nice short term upgrade, but in terms of long-term fixes, he doesn't solve the midfield problem. Chelsea have young first-team calibre players in Mikel and Ramires (and McEachran will probably get there fairly soon), and it seems more than a little silly to push them out while the likes of Benayoun and Lampard are playing up top. Modric signing with Chelsea would block McEachran and probably remove Mikel's position from the team entirely. That's suboptimal, I think.

Comparing this with, say, a hypothetical Javier Pastore signing gives a totally different result. The Argentinian would replace Lampard in the pecking order rather than Mikel, and although he'd be less of a win now move it would indicate a much clearer long-term plan than a Modric purchase. I could be talked around, but right now I'm just not sure if this would be a sensible move for Chelsea, even if Tottenham finally allow a deal to go through.