Frank Lampard And The Double Pivot

Share All sharing options for: Frank Lampard And The Double Pivot

Andre Villas-Boas managed to raise some eyebrows with his starting lineup against FC Kitchee on Wednesday, fielding Frank Lampard alongside Russian wideman Yuri Zhirkov as part of the double pivot of a 4-2-3-1. Lampard put in a superb shift in the 4-0 win, bombing forwards when possible and holding the line when necessary. That success has led to more than a few claims that dropping the England midfielder into a deeper role might solve many of Chelsea's problems.

Will it? There's no doubting that Lampard played the role to perfection against Kitchee, but a pre-season game hardly settles matters. A more thorough appraisal of the shape and options available to Andre Villas-Boas might give us a better idea of how effective a positional switch might be - and we also need to actually define the 'problems' Chelsea are facing with Lampard's current positioning. Let's get started.

For most of his time with Chelsea, Frank Lampard has occupied an advanced midfield position. Chelsea's 4-3-3 has normally seen a holding midfielder play behind a box-to-box player (normally Michael Essien) and an more dedicated attacker. Lampard's main roles have been to keep possession flowing - and to finish moves off with late runs into the box. It's for this reason that he's perhaps the top midfield goalscorer in recent memory.

So that's two very real concerns and one highly speculative one. But while we've defined the scope of the problem, we're not really any closer to analysing it. Let's dig in, starting by casting a close look over the double pivot that's so key to understanding the 4-2-3-1.

The double pivot is not actually a feature of the 4-2-3-1 alone - it might actually be more instructive to think about a more basic 4-4-2 shape. In either case, you have a pair of midfielders who are expected to share both attacking and defensive duties, with one of the two always hanging back to shield the defence. Strictly speaking, no real football team even uses a true double pivot, where both midfielders play on the same line, but we'll use the more standard definition here. 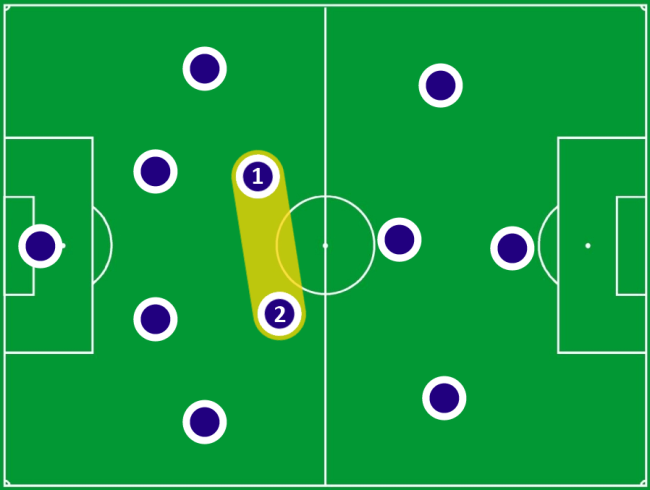 The idea is to have two players starting from the most important midfield zone in order to retain strength in that area should one be needed elsewhere. For example, if midfielder number two in the above diagram opt to go on the attack, one could hold the centre in his absence. Similarly, if midfielder number one was forced to a flank in order to combat an attack, midfielder two could still exert an influence over the defensive midfield area. Starting from a position of strength allows you to place resources where they're needed without the fear that the team will be weakened in a critical zone.

This is the system Real Madrid, for example, use to pair Xabi Alonso and Sami Khedira. Alonso is free to move up the pitch to support attacks if Khedira is covering the space behind him, or Alonso can play deeper to allow his partner to burst forward. When possession switches to the opposition, both players can easily drop back to lock up the centre, or apply pressure where necessary. Playing two holding midfielders allows more freedom for attacking players - although there's a risk of creating a broken team should neither the double pivot nor the fullbacks be particularly adept and moving the ball forward - and this is what allows the likes of Mesut Ozil and Kaka to create without too much in the way of defensive responsibility.

For this reason, it's relatively rare to have a double pivot partnership where both players come from the same midfield archetype (destroyer, box-to-box, passer, scorer), with the key exception of a pair of box to box players, who of course make up the pivot in the traditional 4-4-2. With a pair of midfield players, the necessity of fielding a pure destroyer is diminished, and so we often see box-to-box players (Khedira) partnered with passers (Alonso) in order to make the most of the system.

It should be pointed out that Chelsea have experimented with this shape over the past calendar year. It was, in fact, the switch which brought Chelsea their first victory in months during that extended winter slump, with Michael Essien and Ramires forming a box-to-box double pivot partnership as Carlo Ancelotti shifted to a 4-2-3-1 in the 1-0 home win against Bolton Wanderers in December. Apparently, this was mostly to accommodate Essien's balky knee (and also in response to John Obi Mikel's injury), but the shift freed up both Ramires and Essien to go forward when necessary, and it was a surging run from the Ghanaian that ultimately won the game for the Blues.

So, to summarise, the double pivot in a 4-2-3-1 involves using two holding midfielders in order to maintain strong coverage in front of the defence and versatility, allowing the midfielder playing 'in the hole' behind the striker far more freedom to create. Easy enough, right?

How Lampard Fits In

Lampard, for his part, seemed fairly happy with the experiment against FC Kitchee. With Zhirkov covering him on his forays forward (an arrangement which will not work against Premier League sides, but served well enough as a test case here), he was able to do his fair share of attacking without worrying about weakening the defence, simply taking on a more box to box role than usual. We're all well aware of Lampard's defensive abilities, ones that often go unnoticed thanks to his swashbuckling play as an attacking midfielder, and it's his all-around game that would allow him to succeed in that role. Even Villas-Boas was impressed:

[Lampard] has the ability to play in that role and it is good that he feels so well in that position and gives us that flexibility. I am glad we were able to test him this pre-season in this structure. [He] is one of the best players in the world and he has the flexibility to play in many positions: in a number 8 position, a number 10 position or a holding position.

So what problems would playing Lampard in a double pivot actually solve for Chelsea? We identified three above - the need for a creator to supply Fernando Torres, the need to find a less stressful position for Lampard as he ages, and the need to accommodate Javier Pastore should the Argentinian eventually sign with the club. Does this solve any of them?

I would say that it passes tests one and three, but fails test two. Lampard being moved out of the 'furthest midfielder forward' slot and played alongside a box to box player allows the vacated area to be taken up by a more conventional attacking midfielder. Yossi Benayoun excelled there against Kitchee, and having a traditional playmaker up top will help to give the forwards the chances they need to actually score goals. And, of course, it would free up room for Pastore to come in.

What doesn't make much sense is the idea, espoused by Lampard himself, that dropping back to a deeper role would have a major effect on his health. Presumably, Lampard would turn into more of a box-to-box type player (although a role as a passer isn't out of the question), and that might even prove to be more demanding than his current job as midfield poacher. Ultimately, I suspect the only way to make sure of his health is to play him less.

Two out of three isn't bad though, right?

Of course, considering a formation switch in a vacuum is a little bit silly. Chelsea play the (1-2) variant of the 4-3-3, which comes with its own strengths and weaknesses that need to be looked at. In fact, I did this two weeks ago when I suggested that a move to a 4-2-3-1 would be the best way of incorporating Luka Modric into the team, although that came in a world where Michael Essien's knee wasn't more messed up than James Joyce's idea of how a sentence should work.

There's no real place for a destroyer in the 4-2-3-1, since the need for a do-it-all defensive midfielder is lessened. This means that the starting lineup would likely see Ramires* twinned with Lampard at the back with Benayoun (or an upgrade) starting in front of them. There's a risk that this would slightly curtail Ashley Cole's attacking tendencies, but proper discipline should ensure that all goes well.

*Unless Mikel actually decides to demonstrate that attacking prowess many claim he once possessed.

However, Chelsea play 4-3-3 for a reason, and that's to make the most out of three major talents. Over the past few years, the Blues' best players (in terms of raw talent) have been Petr Cech, Ashley Cole, John Terry, Michael Essien, Frank Lampard, and Didier Drogba. Cech, Terry and Essien are great in a conventional sense, but the other three are different animals, and Chelsea's shape has evolved to get as much out of them as possible.

Simply put, Lampard isn't a particularly special player in the double pivot. I don't think that anyone doubts that he's adequate, even for a club that holds realistic dreams of a deep run in the Champions League, but what makes the 33-year-old such a force to be reckoned with is the fact that he scores goals, and lots of them. He's not going to be able to do that from deep. The Kitchee game wasn't about getting the most out of Frank Lampard - it was about getting the most out of Yossi Benayoun.

The solution, I think, is to be a little more subtle about things. Chelsea don't need to go to a 4-2-3-1 on a permanent basis - they just need to have it in their pocket when the need arises. Should Pastore sign, Villas-Boas could realistically assemble an all-creator midfield that features both the Palermo man and Josh McEachran. Torres isn't going to be complaining about service then. It's not like that would stop him 'normally' playing with the standard 4-3-3 to use Drogba, Lampard, and Cole properly. In fact, the manager gave some hints about the need for versatility after the game in Hong Kong:

We need these different kind of structures for the Premier League and it is not impossible that on Saturday we try another formation with two strikers maybe, but is not because you put another striker in attack that you become more attacking. It comes down to the dynamic of the team. The players' talent allows us to do this and it is also good for them to be challenged to play different ways.

Andre Villas-Boas certainly knows what he's doing here, and I love the idea of Chelsea playing a flexible model both in terms of the players they field and the shape they take. Hopefully he'll have experimented enough over the summer to be comfortable tweaking squad personnel and formation during the actual season. I love the 4-2-3-1 as an option in Chelsea's playbook, but I'm not seeing it as the overriding solution. And that's fine, because I can guarantee you the manager isn't either.

Yet another reason to be fond of him, I suppose.