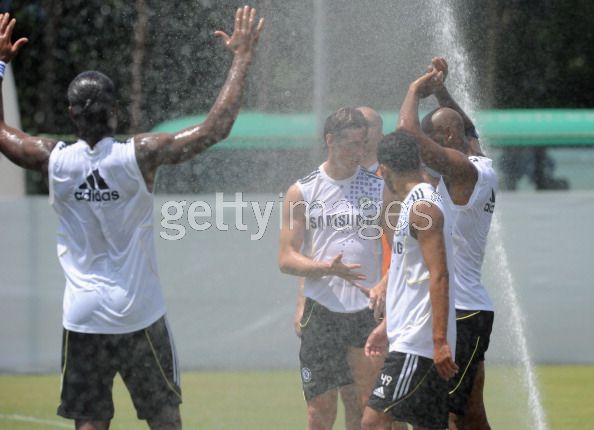 Anelka with a George Michael-esque pose

Yeah, the above phrase, from known lyrologist Christopher Bridges, is kind of lewd. Hey, at least I didn't use Bang cock in Bangkok when we were in Thailand. Area Codes, dude.

By now you should know that we're on the cusp of competing in our first organized tournament of the new season. The Barclays Asia Trophy is at hand, and our first opponent is the tournament host. The event jumps off bright and early for those of us stateside, the boys kicking off around 8:30 am EDT. This competition, unlike our previous preseason friendlies, is a bit of a stickler for details. We're only allowed five substitutions rather than the unlimited number we've been afforded prior.

Andre has planned accordingly, not that you ever had any doubt.

"We will most likely use the team that played 30 minutes against the Thailand All Stars, they are going to get 60 minutes tomorrow to make 90. That's our logic for tomorrow's game based on the regulations of this tournament. I think in the end they will be able to perform. Because of the intensity of training, they will be able to respond. It is the job for us to judge it from the bench."

So that means no Mikel and no Bane, since both went the full 90 minutes in Thailand. From there, we can at least formulate a partial first team. Wonderful.

How he solves the holding midfield role will be interesting, what with Josh and Mikel seemingly unavailable and Ramires still on international leave. Alex was seen in training today - I seen it - so he may well partner EBJT in the center of defense.

That's all I got. See you guys in the morning. KTBFFH