With Chelsea expected to sign Javier Pastore within the next few days, we should finally be getting that big name signing that fans were expecting from the outset. The reason nothing's happened yet is pretty obvious - Chelsea have had significantly less time to pursue big names than other most money-laden sides on account of taking a month to secure Andre Villas-Boas as the new manager. No matter how much Villas-Boas is used to working in the continental system, I can't imagine he'd have taken kindly to the summer transfer kitty being spent without his input.

So far, Chelsea have made small, sensible long-term signings. Oriol Romeu arrives from Barcelona and gives us a long-term option at holding midfielder. Thibaut Courtois is an excellent goalkeeping prospect. Combined, the two have cost the club £12M, but will do little to improve the first team this year. That's not to say they're not good purchases - I love taking the long view as much as anyone, but they're decidedly unsexy.

We've been rather spoiled over the last few years by Roman Abramovich's wealth, and while I'm not going to apologise for that I do have to acknowledge that it gives us a rather odd perspective on things. A second place finish - admittedly after a disappointing season - triggering a spending spree is something that most fans wouldn't exactly take for granted, but here we are waiting for one.

Anyway, considering how blatantly obvious it was that Chelsea were in dire need of some width last season, it's absolutely fascinating to me that said spending spree looks as though it will be spent on an admittedly excellent central midfielder*. While I won't argue that a long-term replacement for Frank Lampard (and I use replacement in a fairly loose sense, so please don't get on my case about it) is necessary, it does rather avoid the question of just how Andre Villas-Boas plans on addressing the concerns about right-sided width.

*This will look stupid if we don't get Pastore, but I'm now confident it'll happen. 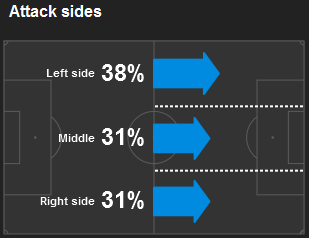 The diagram to the left, originally from whoscored.com, demonstrates just why width is a concern. Chelsea have a very strong left side, which is probably more to do with Ashley Cole being so good than anything else. Chelsea are predominantly a left-footed side, which also doesn't help balance things out, leaving the Blues going down the left flank 22% more often than they attack down the right.

This isn't a problem on its own, but defences have generally responded by opening up space on their right and focusing on the Cole-Malouda left-sided axis. This reduces their effectiveness (partially explaining their relatively poor seasons in 2010/11), and unlike a team with actual width on the right side, Chelsea don't have an obvious cross-field outlet.

Well, unless Jose Bosingwa's on the field. Then they have an outlet, but no crossing ability and minimal defence. But that's neither here nor there - the fact of the matter is that there's no right sides combination that makes sense. Nicolas Anelka, Salomon Kalou and Daniel Sturridge all favour cutting inside towards the channels and Branislav Ivanovic stays at home, meaning that there's just a big hole on the right flank by the touchline.

This is clearly a weakness in Chelsea's game, and it needs to be addressed. Given what we understand of what's been going on in the transfer market, it doesn't appear that we're doing much about it. There are a lot of routes the Blues could take to patch this problem, and I have no idea how the club are ultimately going to address it. To me, the most obvious solution is an upgrade at right back. To Andre Villas-Boas? We'll have to wait and see, but if I were a betting man, I would expect a right-sided purchase before the window's done. It's might not necessarily be big next, but I'm almost positive that something will happen there.

I sure hope it does.