Homegrown Players In The 2011/12 Season - Analysing The Chelsea Roster

Share All sharing options for: Homegrown Players In The 2011/12 Season - Analysing The Chelsea Roster

With the relatively confusing homegrown player rules having a real influence on roster building, it's probably time to take a look at how the current team stacks up against said rules. By the time August 31st rolls around, Chelsea will need to pare down their senior player squad to 25, and then make further cuts to the non-homegrown roster - they're permitted only 17 non-homegrown players in that 25.

So, some definitions first. A player is a senior player for the 2011/12 season if they were born before January 1st, 1990. As a result, there've been a few graduations into the senior squad: Assuming that all stay with the team, Daniel Sturridge, Slobodan Rajkovic and Ryan Bertrand each now count against the 25-man limit.

Now for homegrown-ness, which is a little more tricky. According to the Premier League, a homegrown player is defined as follows:

A home-grown player will be defined as one who, irrespective of his nationality or age, has been registered with any club affiliated to the Football Association or the Football Association of Wales for a period, continuous or not, of three entire seasons or 36 months prior to his 21st birthday (or the end of the Season during which he turns 21).‬‪

So Nicolas Anelka, for example, is not home grown, despite being signed by Arsenal as a 17-year-old - he only played for two and a half years with them being wandering off to Real Madrid (thanks, Wenger, that was very helpful). If he had joined the Gunners in the summer 1996 transfer window rather than the winter 1997 one, he'd count as home grown, despite having moved to Madrid before turning 21. Slobodan Rajkovic, on the other hand, is a foreign player who's been playing on the continent for several seasons, but because he's been registered at Chelsea since 2005, he counts as home grown.

Got all of that? No? No worries, because we have a handy-dandy graph for you to take a look at. It features all of the Chelsea players with squad numbers on date of publishing, as best as I can tell: 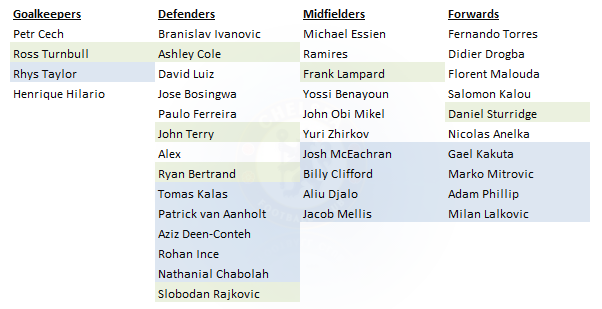 That's fourteen juniors, seven players who qualify as home-grown, and seventeen who are foreign and over 21. All of the junior players, incidentally, will count as homegrown by the time they turn 21, so nothing to worry about there. Anyway, the limit to Chelsea's over-21 squad is eight homegrown and seventeen foreign players, so it looks like on paper that the Blues can either bring in someone who qualifies as homegrown or sell in order to make a purchase.

But that's not actually true. These rules only apply outside of the transfer window - in August and January you can field whatever squad you like without having to make drastic cuts to fulfill the homegrown requirements. This means that there are essentially two periods of compliance Andre Villas-Boas and company need to deal with here: September through December and February through May.

That, of course, has real relevance, because Michael Essien isn't expected to return until at least January, which frees up a spot in that seventeen for the Blues to play with before he returns. This provides the club with an interesting gamble, which I'm not sure they'll take. Do they fill that now and sell off a player in January? Do they keep their squad at sixteen plus seven in order to avoid making a bad deal on a player in the winter window? Or do they just start selling now?

The pessimist in me says that it'll be option two, which is the least exciting, but there's a very real chance the Blues will be able to use Essien's injury to incorporate his replacement into the squad without really running afoul of the homegrown rules. That, at least, is something to keep a very close eye on as we barrel towards the beginning of the season.

Using Essien's injury to add another player to the roster is of course only ever going to be a temporary solution, delaying the problem until winter at the very latest. The simple fact of the matter is that at some point, CHelsea will be forced into getting rid of some of their non-English talent. That's not such a bad thing, considering the wages that they command, but they'll have to be very careful about who they get rid of and who they keep. Let's take a look at some possible candidates from the non-starter pool.

So, there you have it. The home grown situation isn't quite as restrictive as it could be, and there are definitely a full tricks Chelsea could pull to acquire some foreign players without having to sell (although there's a big enough list to sell, if it came to that). The Blues look like they're in pretty good shape to make some major additions without causing any headaches until winter, so we can probably relax a little bit about how much the rules will affect the club. Hurray!