Share All sharing options for: Chelsea may be adding even more young Brazilians in the next several years

Today some interesting news leaked out of Brazil. In an interview with the Brazilian media, 16 year old left back Ronan Queiroz De Paula Afonso (known simply as Ronan) was quoted with the following:

"For Deco coming to Fluminense, they needed three players who were based in the juniors," recalled Ronan. "They sent a scout to watch the championships and to choose three players - myself and two others (Wallace and Pernao)."With Deco arriving at the club, they sold 50% of my rights to the English club"

This news is fairly interesting, as at the time of the Deco departure I had thought all we received was salary relief. As it turns out, we purchased a percentage of the rights to three different young Brazilian talents, all of whom we can buyout upon turning 18 (If young Ronan's comments are to be believed).

For those of you unfamiliar, Fluminense have a reputation of being one of the finest youth academies in the world. In recent years they have turned out Deco, Maicon, Thiago Silva, Belletti, Denilson, the De Silva twins, and Marcelo among many others. Tapping into that pipeline appears to have been a brilliant move by Frank Arnesen, as now we have the rights to three of the best talents in that system if we want them. We'll take a closer look at all three after the jump.

Ronan Queiroz de Paula Alfonso is a 16 year old left back who will turn 17 at the end of August. He's the one being quoted here, so we'll start with him. He's currently listed at 5'7" tall, but having just turned 16 he's probably still got a little room left to grow. He's noted for his technical proficiency and above average speed. At this point in his development he's known far more for his attacking than his defending, and will likely be a regular for the Fluminense junior squad this season. He's also been tipped to take over a regular spot on the Brazil U17 team now that the World Cup is over for that squad.

Ronan won't be a Chelsea player for a considerable amount of time. At the very earliest, he'd be eligible to join the reserves on the last day of the summer window next year. Far more likely would be the chances that he's arriving at the Bridge in January of 2013. He'll be one to keep an eye on though if he happens to break through for an appearance with the first team at any point this season.

Wallace Oliviera dos Santos is a 17 year old right back who turns 18 May 1st of next year. Wallace is probably the most advanced of the three, featuring regularly on the same Brazilian U17 team which features Lucas Piazon. He started all 7 games for the Brazilian team in the U17 world cup, notching a goal against Denmark (the second of the match) which we've got for you here:

Wallace is listed at 5'9" tall, and it appears he may actually be somewhat taller than he's listed. He's an attack minded wingback at this point, but he's also noted for being extremely physical in his tackling and defending. He appears to be pretty solidly built, so I'd guess he'd transition to the Premier League well enough as long as his overall skillset develops. I actually watched every Brazil game of that tournament (to see Piazon mostly), and Wallace was extremely impressive throughout. I'll be very excited if we end up buying his rights a year from now as he'll give us an extremely talented player on the right side, which has been a real void for us for a while. He should be making some regular appearances for the Fluminense first team this season.

Rafael Rodolfo de Souza (known as Pernao) is an 18 year old attacker. He's been on the radar of several Premier League teams for several years, and was nearly a 5 million pound purchase by Manchester City last summer before it seemingly collapsed without a word (They also had a 3 million pound bid rejected in the winter of 2009). I guess now we now what was behind the sudden collapse in the framework of the deal. 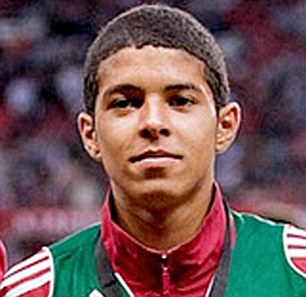 Pernao stands 5'10 inches tall, and is listed at this point simply as a forward. It appears he's played in every possible role in the attack for the Fluminense juniors, and it's unclear what role he's most comfortable in. Quite often he was partnered in attack with Wellington Silva, the young forward who joined Arsenal in January when he turned 18. His noted abilities are his ball control and speed, which are always two excellent things for a striker to have. He's also known as a great passer out of tight spots. Currently he's available for Chelsea to buy out (He turned 18 between transfer windows), but I can't find what the exact remaining figure that they need to shell out would be. I'm sure now that this news has broken we'll hear more details on his situation soon.

While none of these kids are Chelsea players yet, it's quite likely that at least the older two will be in the next 12 months. Pernao in particular could be announced as a signing any day now, although I have no idea if we're planning on doing that now or waiting. That's all I have for you at the moment, but be assured Graham and I will be keeping our ears open for more news (and hopefully more video).