QotD: Who do you most NOT want to see in a Chelsea shirt?

Share All sharing options for: QotD: Who do you most NOT want to see in a Chelsea shirt?

So many of us blogger types have been obsessing over transfers for months now. It's only natural really. Concrete news is at a minimum for the most part, and rumors are very much a welcome diversion from the regular old norm.

Some, including us here at the Chelsea Offside, have even gone as far as to ask readers who would be their dream signings this summer. I guess it's the fantasy aspect that draws us all in. Everyone loves to dream, right?

Well, this time, we've chosen to take a step back. Well, perhaps a step to the side actually. 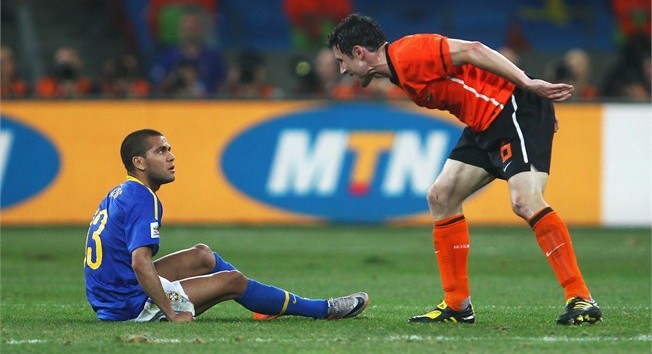 In light of recent links with the likes of Scott Parker (no offense to him, but we just don't like you) and Theo Walcott, a poor man's Salomon Kalou, we suggest this: Instead of asking who you would love to see in a Chelsea shirt, how about who you would hate to see in one?

I know, I know. This is kind of childish. But, despite my age, I am still a child. And, you know, it could be kind of fun. The three of us have provided our answers - Devin with a different, but refreshing take -  below to give you an example of where we are going with this.

It's all about hate figures, people. There are plenty of them out there, some in our team to be honest. So, let us know who would make you lose your shit (in a bad way) if Chelsea were to sign them. This should be good.

Jack
Mark van Bommel
I was not envisioning this query being as difficult to answer as it proved to be. There were so many choices. That was a joke, somewhat. Moving on. As I said, this was pretty damn hard. That was until I looked back on the past two World Cups. Then, my friends, it was clear as day. This Dutch bastard is unmatched as a football hate figure in my household.

It's not so much the disgustingly treacherous way he plays the game - fouls aplenty, for everyone and their mother - but the outlandish arrogance with which he approaches it. There's just this sick aura of entitlement that surrounds him. If the 2006 World Cup wasn't enough, his displays in South Africa four years later were of the most egregious quality. The final, in particular, was shocking. What did he commit, four or five murders in that game?

If this guy were to ever join Chelsea - about as likely as me taking over at right back next season - I think I would shit my pants.

Jamie
Daniel Alves
Can't stand the guy, his diving and whining and turtlenecks, and don't want him in our squad. As a matter of fact, I don't like that so many rumors are focusing on beefing up our defense. Our defense leaked stupid goals last season, but the midfield should be the major focus.

Devin
Ricardo Izecson dos Santos Leite
Same issue for me - there are so many assclowns out there it's hard to narrow down the list.

But if I had to pick only one, I'm going with Kaka. Not for any reason other than the simple fact that he's officially washed-up at just 29 years old. It's exhausting having us linked with him every window, and its especially troubling to see the values being touted as high as 40 million quid. Rubbish. Sure, we need midfield help, but just not in his form. Give me Luka or Javier, but in no way would I want to see Kaka in a blue stripe anytime in my life. He's solves none of our more pressing issues, and would further perpetuate the notion that we always buy aging superstars on the decline.