Yesterday, we broke down the names of some players that could be on their way out. Today, we look at the names in circulation that could well be lining up for the squad this fall. More after the jump: 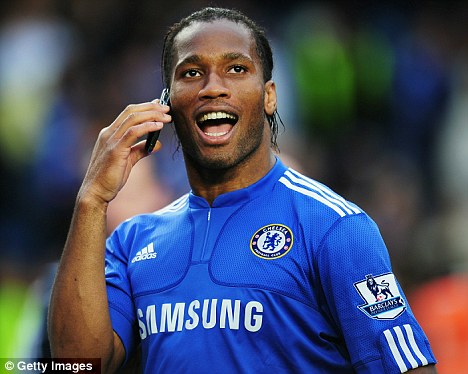 If you haven't had a chance to stay abreast of the latest rumors floating the Interwebs, we're going to quickly catch you up on three of the more prevalent names that the club have been linked with. Though there will most likely be more in the coming weeks, these three we can pinpoint as being actual targets the club are currently engaged in contact with (or so we have been led to believe). Without much ado...

Jack hit on this deal in a previous post, and I'm here to tell you that yes, it is happening. Roman seems to have his mind made up on the lad, and with a tentative fee already agreed in the range of 20 million quid, this looks a matter of when, rather than if. For his part Romelu seems to be pretty keen on a switch to Chelsea, with numerous outlets reporting that his lifetime desire has been to don the Blue kit and learn from the Diddy man himself. Baby Drogba, it seems, is about to become a Chelsea player at long last. You'll recall we made an attempt to grab him in January, but were rebuffed by Anderlect at the time. Now though, both parties seem to be in agreement and he will be the first official domino to fall. Need proof? Check it here.

This one, I'm thinking, is clearly for the future. Chelsea have been tracking the kid for some time, and despite his slight frame and age, he appears to ooze talent and potential. But, the suggestion is that the club would purchase him now but loan him to Anderlect for some much-needed first team experience. Jack posted a terrific video clip of Kevin yesterday, and if you haven't already done so, make sure you check it out- sharpish. But, here's where the plot thickens. He's a left winger. Don't we already have Gael in that slot? So what's the logic here- to groom him for the right side? Or are we actually planning to let Gael leave in the near future? Hmm...some clarity from the club would be well to do in this case.

Okay, the asking price is steep. 35 million pounds for anybody is a tall order, but, there's no mistaking his quality. He'd be a remarkable addition to a midfield that seemed so devoid of creative inclination last season. Some reports suggest Michael Essien as a makeweight in the deal, others speculate that it's built simply on a cash-for-player structure. Regardless, this would be a coup in the grand scheme of things. He answers the mail on what we've been lacking for a few years now, a genuine playmaker that has the instincts and tenacity to thread passes toward our multi-millionaire striking contingent. If Sex Fiberglass was valued at 60 million, then 35 for a Champions League winner seems too good a deal to pass. What can be confirmed, however, is that Chelsea representatives are already in Milan attempting to sound out the framework for a transfer. What remains to be seen, though, is whether or not Inter are willing to part with Wes, and whether or not the player has a desire to play for the club. He had stated on a number of occasions his preference to play for United- but then again, money can solve a lot of that indecisiveness. Here's the story link.

... the addition of these three players essentially represents a net swap of the following from my earlier post:

Lukaku in - Anelka out

Sneijder in - Essien out (or not, depending on the transfer as it develops)

De Bruyne in - Zhirkov out

Now, how does that look to you folks?