Amidst the rumors, the speculation, and the gossip of who might be heading to The Bridge this summer, we take a look at the Exodus of players already leaving the club, along with a list of potential candidates that could be on their way out in the coming weeks. More after the jump: 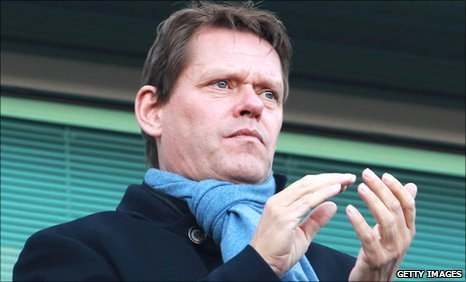 I gets what I wants..

There's a big picture at play, folks. We can't honestly expect to spend 100 million quid this summer and not find ourselves offloading a few fringe players in the process. Every paper continues to spout rumors suggesting such big-name strikers and wingers are on Roman's shortlist, but where are the minutes you say? Yeah, slight snag in the proceedings. So, we're taking the long lens look at the squad sheet and trying to piece together the potential castaways that could wind up at a shore near you this fall.

Already, Frank Arnesen has snapped-up three of our younger assets, with the likes of Gokhan Tore, Michael Mancienne, and Jacopo Sala all heading to Hamburg. So much for that youth revolution, eh? It would appear that Frank has set his sights on a fourth potential target, but this one in the form of a season-long loan to import Jeffrey Bruma. Fabio Borini has already left the club, with his final destination still in flux. But let us shift gears and take a look at the senior squad members that could be on the chopping block for various reasons:

Yuri Zhirkov - Yeah, he hasn't exactly lit up the stands with his play over two seasons. A laundry-list of injuries, coupled with excellent play from one Ash Cole at the back has rendered the Russian rather obsolete. With Van Aanholt and Bertrand in his stead, along with Flo and Gael further up the left side, minutes and moments are few and far between for Yuri, and he's made no secret of his desire to get out and play regularly. I'm not saying he lacks the skills- quite the contrary. He's vastly talented, and could be an excellent squad player for us. But, at the 18mm price we paid, one can hardly justify a few spot starts a season. So, Roman and company need to find a buyer and recoup some money on this deal before it's too late. We'll obviously be taking a net loss here, but this seems like a case of addition via subtraction- out goes Yuri and in comes either one of the two youngsters.

Nicolas Anelka - We have an over-abundance of strikers. Nando did little to help matters, and Danny-boy lighting up the league at Bolton didn't help one bit. Realistically, Didier and Nico have maybe one more season each in Blue before their numbers would be called (Drogs off to Murs, Nico off to the US) so why not get some cash out of Anelka's value before it's too late? Though he has stated a keen desire to stay in London, the club ultimately have to make space for Danny, Sala, and if purchased, Lukaku. Let's not forget these damned Neymar rumors. If all the purchases come to bear, then certainly Nico would need to be offloaded simply to create minutes for others. But as it stands, we have 5 first-team strikers on the books. Five. Five quality strikers. That's three too many in my opinion, but then again, what the hell do I know..

Alex - I don't want to sell him. But if Roman's looking to offset the costs of his new purchases, including justifying his mid-season splurge for Bob and Nando, then it would make sense to follow up on CSKA's long-standing admiration for Atlas. Coming off an injury, his value might be slightly less than we would hope, but tough negotiations might just net us a healthy lump sum. But, selling him will leave us slightly exposed on the bench in terms of defensive depth now that Mancienne is gone and Bruma is poised to depart on loan. It may not be the smartest financial decision, but if the value is there, it might just be too good to pass on.

Paulo Ferreira - It would make sense to sell him, but you're not getting much in return. Better perhaps to keep him on the bench as a squad player and Bob's personal translator.

Jose Bosingwa - If you believe the Van der Wiel rumors, then yes, it would make sense to jettison the Unibrow. He has failed to hit the lofty heights once set before his unfortunate cruciate injury. We paid a tremendous amount for him some three seasons back, so this one will be a loss, but, it would open space for Bane and his back-up to hone in on that right-side slot.

Michael Essien - You guys might hate me for this one. But, as much of a fan as I can be of the Bison, he has been rather pedestrian of late. A virtual spectator for much of the season, floating in and out of proceedings, and failing to put his stamp on matches. His value is decent enough, courtesy of his reputation, that someone might be willing to throw a large amount of shekels in our direction. But the bigger issue isn't selling Michael- it's determining who our core midfield rotation will be. With Lamps established, Ram-Rod honing in on his spot, and statistically speaking, Obi Trice doing a better job of dictating tempo, it might be time to call the curtain on The Bison's illustrious career in Blue.

RAWSE - Never was a fan. Never will be. Get him out and find a back-up keeper to Big Pete that can actually play a few games without the worry of a brain-fart.

...granted, this is a longer list than many would suspect, and though this is not a definitive list of who should go, it's clear that we have some overlap that the club will have to at the very least consider selling this summer. If the rumors are true, and we have a 100mm war chest to do with, and with the looming threat of FFP on the horizon, I fully expect Roman and company to take a long, hard look in the mirror this summer. All told, we might see more names on this list than we care to consider. But at what cost does Roman make these deals? Is it simply for the cash, to soften the blow of the outlay he's planning? Or is it to clear space for the remaining youngsters in our stable (all six of them...)? Or is it a chance to actually revolutionize the style and composition of our squad, to be able to compete on all frontiers with a younger, more athletic mix of talent and technical capacity?

Time will tell. Stay tuned for a roundup on transfer candidates in the meantime. Hit the comments and let us know who you think should stay, and who should go.