Share All sharing options for: 2010-11, in review: Passenger of the season (poll) 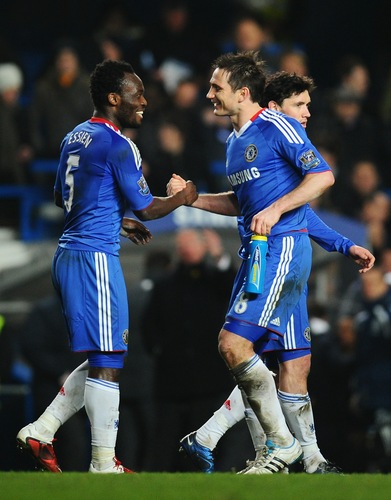 We bring our work week of end of season polling to a close with what sure is to be a testy subject. Who sucked hardest?

This club had its share of underperformers this season, especially during that forgettable mid-season lull that drove us all insane. We've somehow managed to narrow our initial list to four: a pair of midfielders, a forward and one truly atrocious fullback. If none of our candidates catch your fancy, you can of course write in your very own flop. This is a public forum after all.

And now for the part where I repeat what I've wrote in the four other polling posts. Vote now, vote often. Be sure that when you leave the booth, you drop us a line or two in the comments section explaining your selection. Expecting some hearty debate on this one.

Remember, results of our polling will be published throughout next week. Thanks for contributing, people.

A quick rundown of the nominees
Frank Lampard
Lingering injuries (hernia, abductor) may have derailed a promising start, and may well be largely responsible for the overall ineffectiveness of one of England's all-time most prolific midfielders during this season.

However, the fact remains that Super Frank was hardly super in 2010-11. His inability to impact games in his usual manner on a regular basis became painfully evident as the season progressed. What this also did was expose his lack of true midfield skills - controlling tempo, unlocking defenses, creating scoring chances for teammates. Never was this more apparent than in the Champions League tie with Manchester United.

Ask yourself this: How many trademark late runs into the box do you remember? Of those you remember, how many did Lampard actually finish off? A Chelsea legend he no doubt is, but earn you a pass when you represent such a pivotal part of our midfield that does not.

Michael Essien
To the impostor we were forced to watch this season: What have you done with the real Michael Essien, and what must we offer for his safe return?

The Bison no more. Essien spent much of this season looking a shell of his former, dynamic self. Significant knee injuries over the past couple of years have robbed him of his ability to overpower players through his raw power, energy and drive. His range of passing was never of Xavi standard, but this season it seemed as if the Ghanaian couldn't complete a simple pass to save his life.

Psychologically, he looks lost. This dip - no, nose dive - is unfortunate and hopefully temporary.

Fernando Torres
Harsh, yes. But I don't think we can simply shove the Spaniard's terrible time of it under the proverbial rug.

All we can hope is that the bastard is doing some sprint work in the offseason, getting eight hours of sleep and watching clips of himself from two seasons ago. The talent is there, we've just yet to see it.

José Bosingwa
Another one stricken by injury.

Bosingwa returned to the fold this season amidst high expectation. At least from me. I thought, as he did prior to the knee problems, the Portugese would force his way into the team - even with the excellence of Branislav Ivanovic - and revive the elite attacking thrust that had been missing from the right fullback position since his initial injury.

The man was woeful. Truly woeful. We knew of his defensive frailties, yes, but did we expect him to be even worse? More painful was his general lack of tactical acumen. Most of the time, he looked fucking clueless on the field. But nothing - nothing - can top his crossing ability. It was non-existent. Debilitating. I've seen better service at my ex-wife's house (I kid).