Modric in the Mail: I want to move to Chelsea

Share All sharing options for: Modric in the Mail: I want to move to Chelsea

"I want to leave Tottenham as friends. I have enjoyed my time there, but now it is right for me to look at another club."

I know it's the Daily Mail, but they can't make shit up like this can they? Can they? 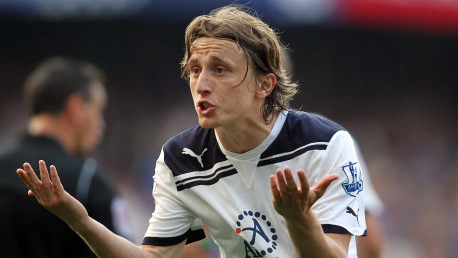 Everyone's topic of choice at the moment, Luka Modric, has apparently been speaking to Sportsmail aka Matt Lawton. The midfielder had a whole lot to say, too. This exclusive interview drops some serious bombshells.

Unfortunately for Spurs, it's mostly bad news. That is, of course, if this carries any weight. But, then again, you can't just make up quotes.

The news? Modric is interested in a move away from White Hart Lane. His preferred destination? Chelsea.

"I have an arrangement with the chairman," Modric said. "When I signed my new contract, he said that, if another club came to sign me, they would consider the offer.

"Chelsea are a big club with an ambitious owner. They have great players and they have ambitions to fight for the title and win the Champions League. I want to stay in London. I am very happy here and so are my family. I like the city."

Modric, after expressing that this decision was not about money but ambition, went on: "I need to talk with the chairman. I won’t ask for a transfer, no. That would be disrespectful. I hope they can reach an agreement (with another club) that is satisfactory for everyone. I am on holiday, but I need to speak and to see if I can find a solution to this."

This revelation would coincide with Ian McGarry's story that Modric was indeed interested in a move and preferred to stay in London. There was also word of a bid from us last summer for his services that first started to turn the Croatian's head. Anyway.

The question is how far will Modric go to clinch the move. He says he will not ask for a transfer, thus meaning we still face a rather difficult prospect of signing the player. Like I said in the previous Modric post, this could well drag out into August with the price likely reaching around £35 million. But, as I said then, I would pay it. Love this guy and, at 25, there is still so much room for improvement.

"It is normal for a player to dream about playing for a bigger club."

Man. That has to sting right there.

Exciting stuff to be sure, even if we don't manage to pry Modric away from Spurs. This on top of the Kevin De Bruyne and Romelu Lukaku quotage today makes for an entertaining start to the weekend, definitely. As always, we'll keep you posted of any and all new developments as they surface.