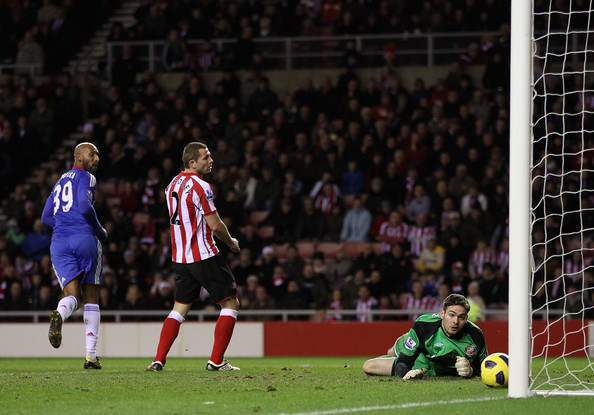 Our look back at the season that was continues with a focus on some of the good times. Key word being some.

Best match. This ain't best performance mind you. We're looking for the best game Chelsea were involved in all season - win, lose or draw. If only that game show was still on NBC. Wait, I'm getting off path here.

We've offered up five nominees, all of which have their pros as well as cons. We've actually opened up this one to everyone, so if you have a particular gem that we failed to mention feel free to write it in. Vote now, vote often. When you leave the booth, drop us a line or two in the comments section explaining why you chose the match you chose. We’re looking forward the response. KTBFFH

A quick rundown of our candidates
Chelsea 6-0 West Bromwich Albion - 14 August 2010
Not a bad way to open the defense of your Premier League crown.

This was a lesson in brutal efficiency. We weren't even that polished, you know, yet we plundered as if there was no tomorrow. Florent Malouda and Didier Drogba pillaged in second gear. Everyone did. Perhaps not our best match in the very sense, but the idea that we were this good, this early in the season, without actually being that good is pretty wild. Baffling actually.

I watched this match on the small screen (web stream) and it must be said that I was on the edge of my seat. No joke. This was a roller-coaster of emotions. To elicit such a reaction with an understrength side in a competition not exactly at the top of our to-do list speaks to just how good this match was. I think I referred to it as ridiculous in the recap, and that's spot on.

Josh McEachran wowed us on his home debut. Patrick van Aanholt scored his first for the club and, well, was pretty damn good overall, too. Nicolas Anelka nearly single-handedly pulled us back from death. It really made for great viewing.

Chelsea 2-0 Arsenal - 3 October 2010
Not a scintillating match per se, but a win over Arsenal - as customary as they had become at that time - is always a gas.

More so than the result, this match will be remembered for two things: the arrival of Ramires and its goals. These two strikes were sensational, so different in nature but equally glorious. Didier Drogba's pirouetted back-heel is not likely to be mimicked soon. Alex's free kick shook the Heavens.

Sunderland 2-4 Chelsea - 1 February 2011
"Chelsea were fantastic. They looked like Chelsea again." Those were the words of Steve Bruce after we decimated his side at the Stadium of Light hours after the end of the January transfer window. He wasn't joking, either. We were absolutely stunning on this day.

It was this result that gave many of us hope for a potential world-class partnership between Fernando Torres and Didier Drogba. Kalou was exceptional paired with Drogba, but it was Nicolas Anelka who stole the show spearheading a diamond midfield. The Frenchman was imperious in what must be considered his finest performance during his tenure at Chelsea. We scored four, but it could've been a cool dozen saver a couple of posts and a superb Craig Gordon.

Too bad the match served only as fool's gold going forward.

Chelsea 2-1 Manchester United - 1 March 2011
A reminder of just how good this team can be. That vintage resilience, forged in the early days of the Abramovich era, surfaced on the grand stage in as engrossing a second half as we played all season.

We were pretty much terrible in the first half, and trailed to a Wayne Rooney goal. The final 45 minutes, however, served as the springboard for our somewhat miraculous leap back into title contention. What really comes to mind is just how much both teams wanted to win this game. That second half was viewing of the highest level.

And then there was David Luiz. The Brazilian provided his first of what will no doubt be many seminal moments in his Chelsea career with a volley that would make any elite forward cringe with envy. Astonishing match.