Webb is in: Should we be worried?

Share All sharing options for: Webb is in: Should we be worried?

Howard Webb will take charge of Sunday's potential title decider at Old Trafford. Now, before you sink your pain into some unlucky bloke's face, do we as Chelsea supporters even have reason to be upset? 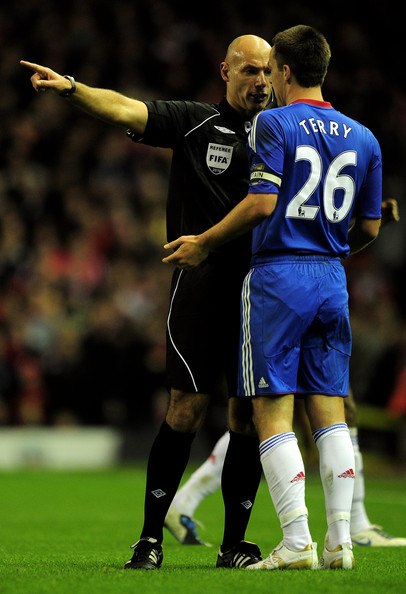 Webb is known for a pro-United bias. Ryan Babel, hell, he absolutely loves the guy.

But how much of that is fact and how much is perception?

The Telegraph went into some detail today to dispel the idea that Webb cuffs Ferguson's scrotum on the weekends. Webb has officiated 20 matches that have involved either Chelsea or Manchester United - eight involving Chelsea, 13 featuring United.

United hold a win percentage of 77 percent when Webb takes charge of their games. We have won just 38 percent of the time under his officiating. Sounds fishy.

Webb has officiated only one game between the two sides, a 3-0 win for United at Old Trafford on 11 January 2009. Well, that blows.

He certainly has made some boggling decisions in United's favor, the FA Cup tie with Liverpool in January being this season's glaring example. Furthermore, that penalty he handed United against Spurs in April 2009 was laughable.

But we also have been fortunate under his watch.

I remember Webb failing to give Spurs a penalty during our 3-0 win in September 2009. I remember Villa being denied one in last season's FA Cup semifinal. I also recall EBJT being fortunate not to receive a red card for a woeful challenge on James Milner. Deco was lucky to remain on the field that day as well.

So, as one can see, it's not as if Webb is running about in a United shirt - no matter how much Babel wishes for that to be the case. What the FA appears to have gone for in this decision is a man who has called it for both sides. Seems right at least on paper. Will it all even out Sunday? I fucking hope so.

Still, United can't really lament a Chelsea supporter's view of this appointment. The assignment of Martin Atkinson would have provoked a similar reaction from United supporters.

All we can really do is hope for a fair account on Sunday. Everything else will sort itself out.