Guus is 'committed to Turkey' - so sayeth the wily agent

Share All sharing options for: Guus is 'committed to Turkey' - so sayeth the wily agent

Should we expect to be painting a similar picture to the one below come August? 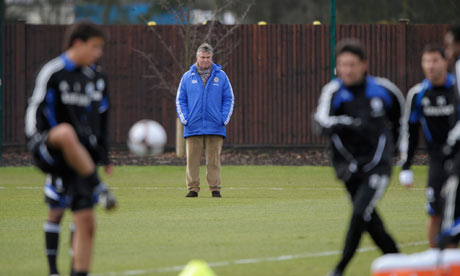 We keep hearing about the Dutch around these parts. Marco Van Basten is the man to helm the rebuilding project at Chelsea Football Club. Guus Hiddink will aid in the cause as director of football. That was the initial volley. But there's another idea, one that's been thrown about here more than once. Maybe Guus, currently overseeing the Turkish national team, will just do it all his lonesome - flanked by a certain Russian and perhaps a legend named Gianfrancola.

Hiddink's agent, Cees van Nieuwenhuizen, offered some interesting insight into that possibility Tuesday. He didn't say yes. He didn't exactly say no, either.

"I don't know that you can say that," he said when asked if Guus would not consider returning to club management. "He is focusing on his job and he likes what he is doing. As long as he is in the race for the European Championship with Turkey, he would continue to focus on that. Once that is finished he will start thinking about his future."

Hiddink could potentially be available for a role at the club as early as the week of 5 June, though that's highly unlikely. A defeat to second-place Belgium on June 3 in Euro 2012 qualification would put Turkey, currently third in Group A, in a very precarious position. The TFF may be willing to part with the Dutch master soon thereafter. If not, the earliest you're looking at is October. Make the playoffs, and we're talking November. Failing to qualify for Euro, well, you know the drill - he's out of the picture for certain, at least as manager.

Regardless, Chelsea will be buoyed by the remarks of van Nieuwenhuizen. The question is whether Roman really has his mind set on installing Hiddink as manager once again.