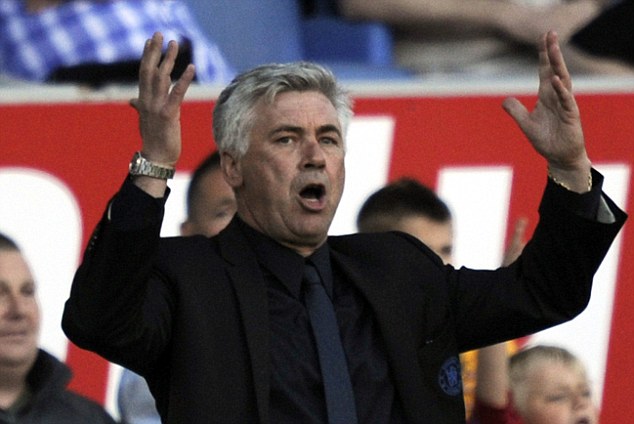 I can't emphasize that enough. Sure, many of us figured the end was nigh for Carlo. After months of speculation, the double losses to United in the CL and PL essentially sealed his fate some weeks ago, with the remaining matches on our schedule an overall exercise in futility. He was, in many respects, a lame duck manager these past two weeks. So it comes as no surprise, really, that he was shown the door. But I take umbrage with the manner in which Mr. Ancelotti was terminated, and in particular, with the methodology behind such a decision.

Obviously, this termination was sealed by Roman and agreed upon some time back. Speculation has been rife for months that Carlo was going to depart this summer, with the prospect of managing his 'dream club' the topic of conversation. It seems every media outlet took a crack at the story, some even going as far as suggesting a pre-contract was agreed upon months ago. But in front of the press, Carlo played it coy- often referring to his three-year contract with Chelsea as a basis for squashing the speculation. Some times, he came out swinging, insisting that he loved managing the club, that he was pleased with the players, and had the full support of the management at the club. At other, perhaps more vulnerable moments, he would let his guard down and offer an insight into a man clearly thinking about his future.

This season, in summation, broke Carlo. I'm not saying he can't win, nor am I suggesting that he lacks the pedigree to succeed. You'd have to be a fool to take such a leap of logic in that regard. But, it bears notice that this season saw Carlo fail to execute on the pitch, while at times seemingly lose control of the dressing room and his influence over the proceedings. Having his right-hand sacked mid-season did little to instill confidence in the troops, and it took a mammoth fight-back over the final three months to wind up in a respectable, albeit deflating, second-place finish. And with all this strife? Carlo seems to have lost his swagger, and subsequently, his fire. He looks a man beaten-up and tired, ready to go home and toil away under the Italian sun. For that, I cannot fault the man.

Let's not ever forget the yeoman's job he did in charge of the club last season. Leading us to our first domestic double, the future looked quite bright heading into this campaign. I won't delve into the details just yet, since we're saving our year-end posts for next week, but suffice it to say we failed to live up to even the most basic of our expectations. Across the spectrum, we failed. Though we'd like to pin it on players, or injuries, or a stretch of bad luck, ultimately, the board has to lay responsibility at the feet of our manager. In this case, they deemed Mr. Ancelotti the culprit, and with the swiftness generally reserved for January transfer splurges, they succeeded in firing Carlo a mere ten minutes after his press conference at Goodison Park.

It's a sad world we live in, that we can't give the man a proper send-off, or even feign the respect he deserves by 'mulling' the decision for at least a day or two before kicking him to the curb. Ten minutes after he finished the season? He wasn't even on the fucking bus before he got his marching orders from Gourlay and company. If Roman feels this will ultimately make the club better, then so be it. Though he might have claimed ignorance or naiveté when Ray Wilkins was sacked mid-season, he could hardly have less blood on his hands this go around. If anything, the manner of Carlo's sacking all but confirms it was Roman who pulled the trigger on Ray-Ray's termination mid-season.

We must, out of respect, take a moment as fans to generally appreciate the contributions of Carlo to the club over the last two years. Say what you will about his technical expertise or ability to produce on-pitch results, or even trophies this season. But nobody, I believe, can deny that he was a model manager and good servant to the club in his two year tenure. He made some excellent transfer acquisitions, managed to revitalize Cech, brought the best out of Bane and Ashley Cole, scuppered together a solid season from Drogba, helped Kalou discover his other foot, and came away with two trophies to boot. Amidst all the chaos, he kept his calm and soothing grandfather-esque manner, and never truly wavered in the face of adversity.

I detest the way his sacking was handled. It was gutless, cowardly, and a shameless act that only fuels the well-deserved criticisms the club often receives in these areas. How are we any better than West Ham, who abruptly fired Avram after being relegated, and had to endure Chelsea fans ridicule and mockery claiming that WH's hierarchy were 'disrespectful'. What are we, then? There's plenty of blame to go around this season, but to assume that all of it lies at the feet of Carlo is preposterous. The man deserved more from us, from the club, from the players, from Roman. This was not how he should have been removed, by any stretch.

Shame on you, Roman. Shame on you, Gourlay. Happy as I might be to have a new manager on the periphery, I can't lie and pretend that you've done anything in the last 24 hours that a true Chelsea fan could be proud of.