So, as you may have noticed, I've been less active on the site than usual, on account of flying to London and being herded around like a sheep for several days by the lovely folk at adidas. I figured the trip was worth a story, so here it is. Presenting: Graham's Grand Stamford Bridge Adventure, by Graham. This is Part One.

We'll skip past the boring bits (did you know that Newark doesn't have the internet? Neither did I!) and fast-forward to my first day proper at the Bridge. I got to stay at the Copthorne Hotel for a few nights thanks to adidas, which is actually part of the stadium complex, and I wasn't too disappointed with it, although the beds aren't the most comfortable in the world. 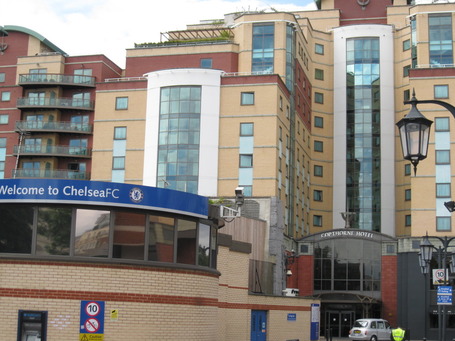 Anyway, my first day there was a matchday - Chelsea vs. Newcastle, to be exact. We (myself and other bloggers assembled for the Predator launch) we given free tickets to the Tambling hospitality suite, whereupon we were greeted with a bloody mary and lots of delicious food. I had a coke. It was 12 PM! Lunch was quite tasty, involving a hunk of beef and a delicious blueberry tart, although thankfully not at the same time.

We were promised a special guest by adidas, and I was slightly worried when Kerry Dixon and Jason Cundy were trotted out for an immensely boring five minute question and answer session, although we were then assured that they were not our special guests and had just turned up. Anyway, at some point during dessert lineups were announced and I'm pretty sure I let out a little squeal of joy when Josh McEachran's name flashed onto the screen. It's a shame I wasn't allowed to wear my jersey to the hospitality suite, though...

After dessert was done we were sent shuffling off to our seats, which were really quite good, in the second row of the West Stand. It was my first Chelsea match at Stamford Bridge*, and I was surprised by how small the stadium felt. I would have called it intimate, but nobody around me was really making much noise apart from a man directly in front of me who was consistently going mental about everything, which was pretty funny. The best part was when he called Carlo Ancelotti  a 'tactical pygmy' at some point in the second half, although I'm getting ahead of myself.

*If you think that makes me not a 'proper fan' consider this a polite invitation for you to blow me. 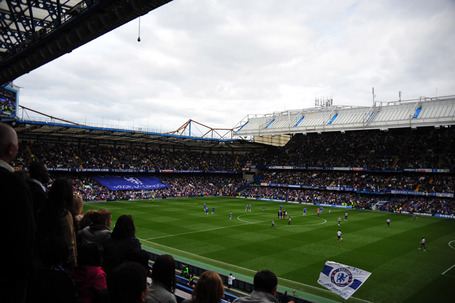 Chelsea, of course, scored very very early from a corner, which was a bit of a surprise as by and large Frank Lampard's deliveries have been rubbish all season. Branislav Ivanovic got the goal, volleying (maybe) the ball in from a header back into the mixer, although I found that one of the difficulties with watching the game live is that I don't get enough instant replay footage to figure out what's going on if I spend most of my time chatting to my neighbours about the many virtues of Josh McEachran or the fact that Fernando Torres looked like an actor playing a football player in an actual match.

Newcastle equalised shortly thereafter on a deflected free kick, something that would have made me much, much angrier had we still been in contention for the title, but most of my time was spent watching McEachran do his thing. The boy's not infallible - he made a couple of silly errors in midfield - but he is very good, producing the two best passes of the match and also showing far more ability in the tackle than I'd previously given him credit for. I would say he was the best Chelsea player on the pitch in the first half, but everyone else will tell me that I'm biased, so I won't.

Anyway, halftime came, so it was back to the hospitality suite for more food and more drinks. I was inexplicably handed a shot of Newcastle Brown Ale on my way back to my table, which I drained in one go because there was literally no way not to (wish I'd kept the glass), and then I ate a chocolate brownie which had the sugar content of a blue whale made entirely of sugar. It was delicious.

The second half was something approximating rubbish, although I was on such a sugar crash that I didn't really notice anything but McEachran getting subbed off (boooooooooooooooo) and the goals, one of which was provided by Alex to surely win us the match and the other scored by Ryan Taylor, I think? Maybe? someone who was definitely Steven Taylor to un-win it in the last kick of stoppage time. I laughed. It was pretty funny. I fear what my reaction would have been had this game mattered, but I'm reasonably confident that I would have been kicked out of the Bridge and possibly banned for life. Pygmy-caller yelled a lot, his neck turned pink, and then he exploded, leaving an empty seat behind.

Back to the suite for some post-game drinking we went after I had the obligatory look I'm at the Bridge photo taken, but it wasn't long before we were summoned to another room in the twisting bowels of Stamford Bridge. I had no idea where I was being herded to and had a brief fear of it being some sort of torture chamber where I would be punished for failing to adequately live-blog the match. But instead of manacles, we ended up overlooking the pitch with a room full of wine. Wine and one Salomon Kalou. But that's a story for Part ka-Two.