Chelsea beat Tottenham Hotspur 2-1 at Stamford Bridge in a very strange little game that will ultimately have huge ramifications for both teams. Zonal Marking and others have already covered the match, focusing mostly on Tottenham's 4-1-4-1 and Ancelotti's initial usage of Didier Drogba as a second striker. I won't pretend to have the sort of tactical nous that the likes of Michael Cox possess, but I make prettier pictures so I'll give it a go anyway. However, I've been 'spoiled', as it were, so there's every chance things in this post have been biased by other peoples' opinions (when I was in school this was called research). Formation chart after the jump.

As mentioned above, Harry Redknapp used a 4-1-4-1 for the trip to the Bridge, a departure from his usual shape, which is a 4-4-1-1 with Rafael van der Vaart as withdrawn, roving striker. It's unclear why he did this, with Spurs needing all three points from the match, but Brazilian midfielder Sandro's talents are well suited to a holding role and Redknapp was without the injured Tom Huddlestone, which may have forced his hand a little bit.

The reason Tottenham managed one shot on target all match (and that one being a 30-yard wonder-volley) is pretty obvious: They were a 9-1 broken team. Roman Pavlyuchenko up top didn't work at all - he was too far from his teammates and unable to make and gains on long punts while being marshalled by David Luiz and John Terry. I'd imagine that Gareth Bale and Aaron Lennon were intended to make slashing runs in support, but Bale was covered by Branislav Ivanovic while Aaron Lennon had what I'll generously describe as a poor game on the attack. Both were non-factors going forwards.

Chelsea, meanwhile, lined up in their 4-3-3 shape, with a bit of a surprise - Didier Drogba took Salomon Kalou's place as the right forward, with Fernando Torres getting the start in the centre as his reward for scoring his first goal for the club the weekend prior against West Ham United. Tactically, the major talking point for the Blues was whether or not Drogba played competently in this unusual role - my answer is a qualified 'yes'. 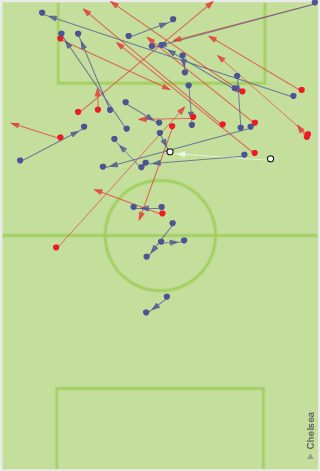 Much has been made of Figure 2, which shows that Drogba was profoundly ineffective at crossing from the right flank. While that's true, I think it misses the mark a little bit. Chelsea's wide forwards aren't typically expected to be crossing much, that being the province of the fullbacks - in the three matches prior, Salomon Kalou attempted a grand total of two crosses from the right forward position. Against Spurs, Drogba (according to the Chalkboards, I didn't actually count them) tried six.They mostly didn't work.

Drogba's mistake, it seems, was in attempting the crosses in the first place. Several times he gave the ball away with an attempted delivery when a pass backwards would have been a wiser solution, and his interplay with Ivanovic was fairly poor (this has a lot to do with Ivanovic's play). However, he did link up fairly well with the midfield and Fernando Torres, however.

Ancelotti ended the Drogba experiment early in the second half, withdrawing Torres for Kalou and returning Drogba to the centre. Was the decision a verdict on whether or not it worked? It's hard to say, but Chelsea were looking to play through the middle and the presence of Sandro was blocking off the passing lanes, so Drogba was a better option than Torres in the middle anyway. Regardless, the next time (if there is one) that Drogba plays on the right, it would probably be wise to field him alongside a more aggressive right back - Paulo Ferreira might be a good choice thanks to his crossing ability.

Speaking of Sandro, he was excellent in the holding role for Tottenham (as well of scoring an absolute peach of a goal in the nineteenth minute, for which he received a bollocking from his manager for pushing too high up the pitch). After the chastisement, Sandro essentially formed a screen between the Chelsea midfield and Fernando Torres, forcing the Spaniard to drop back into less dangerous positions to take possession.

I'm going to throw in the passing chart a little early, because it shows something I think is pretty interesting. Check out the weighted average of pass completion/attempts:

In terms of passing, Chelsea dominated the first half, aside from a blip around Sandro's goal that I'm just going to ascribe to being shell-shocked. Then, at halftime, things went horribly wrong, and the Blues never really recovered (despite going on to win). Why?

I didn't notice anything at the time, on account of being really stressed out and really busy, but the chalkboards tell a telling story. The Blues began playing through the middle rather than via the channels, which was, in my opinion, pretty stupid considering how well Sandro was playing. The Brazilian made five tackles dead centre in the second half, and Spurs as a whole racked up interceptions and tackles galore through the middle following the break. I'm not totally sold on this explanation, of course - trying to figure out football matches from data after the fact is a bit of a fool's game, but my memory broadly agrees with me here.

Anyway, I don't want to imply that Tottenham were outplaying Chelsea in the second half - they were merely outpassing them - because Spurs still had major trouble getting the ball into the final third of the pitch, even with the Blues merrily giving away possession left and right. Redknapp attempted to rectify the problem by swapping Pavlyuchenko's rather pointless holdup play for the speedier Jermaine Defoe, which helped a little, but not nearly enough.

Chelsea eventually scored their winner by driving through the centre, with all three forwards (by now Nicolas Anelka had been introduced for Florent Malouda) crashing through the middle to create havoc in Heurelho Gomes' box. Kalou eventually smashed home from a pretty clearly offside position, which went along well with Lampard's equalising goal at the end of the first half, which was also dubious (at best).

It would be remiss of me not to mention the good work done by John Obi Mikel on both phases of play. Mikel was essentially free to do whatever he wanted when Chelsea were on the ball, since his natural marker was Pavlyuchenko and the Russian didn't seem particularly inclined towards closing him down. This led to lots and lots of easy passes; Mikel completed 73 of 78 for an easy lead in the individual passing charts. However, he was probably even better off the ball - a major reason Tottenham couldn't link up play between midfield and attack is that Mikel was doing a fabulous job of breaking things up between the lines.

Let's take a look at our location data:

What's striking here is how deeply (and how well) Tottenham defended. Look at the tackle and interception locations - Sours absolutely destroyed Chelsea when they got into the final third of the pitch. There's no doubt that Tottenham's stout defence was a major feature of the match (after all, they did concede zero legitimate goals over ninety minutes) but the overall style is really strange. I wouldn't expect this sort of behaviour from a team coming to Stamford Bridge to earn three points, but there's no way Redknapp would have been playing for a draw either. Odd.

So, lots of questions. What would happen if you paired Drogba with a more attacking right-back (note to Ancelotti: Do not try this against Manchester United)? Did Chelsea actually change their strategy at halftime? Is so, why? And finally, what made Tottenham come into a game where nothing but a win would do in an defensively-minded 4-1-4-1? There's also the instant replay debate, but I'm not going to touch that with a long stick...

PS: Converted centre half Younes Kaboul was really good at right back for some reason. That or Malouda had a terrible day. I'm still not sure.