Officially out the door this summer. More after the jump. 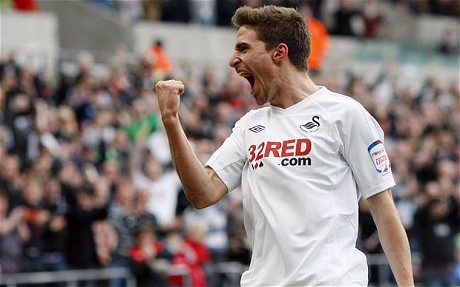 I'm not going to sugar coat this. Losing Borini is a blow. You may not think it at first glance- he hardly had any first-team appearances during his Chelsea career- but he was a lightning-rod of productivity for the reserves. Anyone care to remember his five-goal barrage against the West Brom reserves from earlier this year? That's what I thought.

The point is simple. We're a club in flux and it's been made clear that Fabio is surplus to requirements, whatever those vague plans may be at the moment. With Didier, Nico, Fernando, Sala, and Danny in front of him on the pecking order, coupled with Fab's recent renaissance as a Swansea player, the writing's been on the wall for a few months now. The impasse seemed to be a new contract that would pay Fab in relation to his appearances, something he wasn't to thrilled by, but not an uncommon deal offered by the club in recent years (See: Ballack, Michael). But for a player that's just breaking through to demonstrate his talents, clearly the issue at hand was for Fabio to find a situation that would give him time on the pitch playing high-quality footy.

It just wouldn't come right now at Chelsea. Regrettably, we may never become the club that has the space to afford time to all of these high-caliber starlets in our stable. Though it pains me to think of what Fab might materialize into in a few years (Pippo Inzaghi comparisons aren't far off base), the truth is we're always going to have big-ticket names and multi-million dollar superstars on our teamsheet that limit the chances for our youth to shine. We tried, in vain, this year to give some breathing room to the kids. But a combination of some untimely injuries mixed with Carlo's seeming reluctance to trust in these children gave way to our worst season in recent memory.

Roman's going back to the drawing board this summer. You can bet with the looming FFP restrictions this will be an important summer for spending-friendly clubs, and we should all brace for impact. There will be new recruits, there will be sales. There will be a player purchased that irks many of us. And there will be one that we all come to adore. But amidst the millions that will be wired through Barclays bank accounts this summer, I cannot help but wonder just what the true cost of retaining a player with a future as bright as Fabio's might have been, and what could have been our future with him and Daniel leading the line in a few years time.