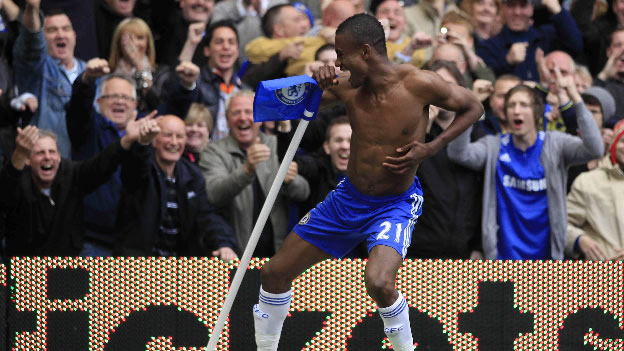 Salomon Kalou without a shirt on does not do it for me, no. Still, glancing at that horribly uncomfortable photograph, I have to ask: Remember that day?

We were on top of the world. Well, not the world - Internazionale had a firm grasp on that claim - but we were the toast of England. An imperious display against lowly Wigan, eight goals to none, ensured Chelsea of a third Premier League crown in six seasons. A few days later we would secure the club's first-ever domestic Double. Happy days.

Fast forward to now and it all seems generations ago, really. We enter Saturday's home match with Wigan, again lowly, on the cusp of a supremely deflating 1-0 home loss to Manchester United in the Champions League quarterfinals. We've all but relinquished our league championship. Picking ourselves up off the floor, a vintage trait of this club in recent time, seems more and more difficult these days.

The passion, it appears, has been extinguished. Am I overreacting? Maybe.

Why: So the league is gone. Fine. Securing Champions League football for next season has been the priority since the turn of the year. To do so, we must win. Throwing away points at home against a Wigan side velcroed to the foot of the table would be catastrophic.

How does Carlo approach this fixture, then? It's an awkward one to be sure.

On the surface, three points almost seem a certainty. Then again, this is Wigan. Show up and they can beat anyone. Don't, and they get battered 8-0. Still, you have to feel these are points we should collect. While making sure we secure those, Carlo must also cast an eye toward the decisive leg at Old Trafford on Tuesday. That game may well decide his fate at this club.

So, do you rest a number of key figures in preparation for that match or do you hope continuity - and more pitch time for Fernando - prove the answer? Time will tell.

Me, I would most certainly rest Bane and even Drogba. I'd love for Ashley to get some time off, but it won't happen so why even think it. Kalou to spare us the sight of a Zhirkov or Malouda left-sided option. The ever-improving Torres to remain in the side against a team he'll fancy opening his account against.

Second, I would revert to 4-3-3 - at least at the start. The lack of discipline we have with two up front is borderline insane and it's just an arcane formation, simply put. I was willing to allow time for Drogba and Torres to click, and it may happen in the future, but right now, in this season, we don't have time to wait. If anything, the loss to United proved that we must move on if we are to have even a remote chance of hardware come May.

What it also proved was how vastly underappreciated Mikel is. The amount of times Essien got caught on the ball against United - in addition to the fact that he's a shell of his former self - meant that neither Frank nor Ramires had the ability/freedom to break into attack; both were far too worried that if they did Essien would lose possession and they would be caught out of position. Another key is the spacing in midfield. We're usually quite wide, without a deep-lying midfielder to recycle possession. This is where Mikel is ideal. Sure, he doesn't make the highlight pass - which seems to be why he's seen as average at best - but he does sit deep and distribute well, which aids is retaining both our shape and possession. As soon as he came on against the Mancs, we looked far better. He must start Saturday and again Tuesday.

If Alex and Yossi are fit, both need see the field in some capacity Saturday. I can't stress that enough.

Bonus: Blue News gives us some teams news ahead of the match.