The two finest clubs in English football over the past six seasons renew their Champions League vows. This, my friends, should be unforgettable. 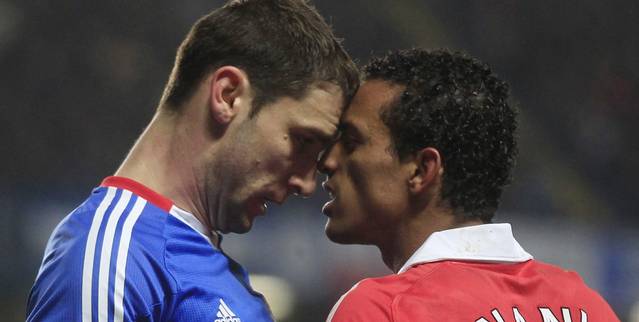 Devin was to compile this preview, but, alas, he went and got himself engaged last night to the love of his life. Such a selfish move left me - a man currently occupied at his full-time employer - with the task of putting this bad boy together. Thanks a lot, man.

Take none of that seriously. Well, except the engagement part. We're incredibly pleased for D, so when you see him around these parts, wish him all the best. Nevertheless, we still need some insight into this clash of titans and I'm here to provide it.

This will likely be abbreviated. Hopefully you can forgive me.

Why: Last season's Premier League crown, as part of an unprecedented Double, is now a distant memory. Stoke City made certain of that. Our failure domestically leaves this hallowed competition as our final hope this season. I keep envisioning the infamous Star Wars opening text crawl when I read the previous sentence. EPIC. Anyway.

Of course it would come down to the Champions League. Roman's Holy Grail. The source of such grief for Chelsea supporters in recent times.

It really is the final piece of the jigsaw. Carlo has been focused on Europe for some time. Now he must deliver or face the possibility of an unwarranted, and unwanted, exit.

Why? Because this season's success appears, for Roman and, more importantly, Ancelotti, to rest on Champions League triumph. Talk about pressure.

Tonight's match represents Carlo's 100th at Chelsea. He's relishing the opportunity for another century. If the pressure is beginning to wear on him, it isn't showing. As for this opening leg, the two-time winner of this competition is excited - just not as much as he once was.

"I prefer it when I was a player," Ancelotti said in the pre-match presser. "I say to my players there will be pressure but the most important thing is we have to be happy," he said. "Every player wants to play this kind of game. Obviously there is pressure because we want to win. But my emotion is this – happy to be involved in this game."

Will he still be happy come tomorrow night, though?

That's basically all I have time for, guys. Apologies.

I do think that though Drogba was in fine form against Stoke, it would serve us well to have him come off the bench against a fatigued Smalling and Vidic. Furthermore, Fletcher's absence could be vital in terms of Carlo's blueprint. Our midfield has been underwhelming, at best, over the past few weeks. Mikel's inclusion would make sense, at least if you look at how the game will likely play out. I sense a cagey, tense affair reminiscent of our CL forays with Liverpool - 2009 not withstanding.

Video bonus: This should get the blood flowing, even if it wasn't created solely for this tie.