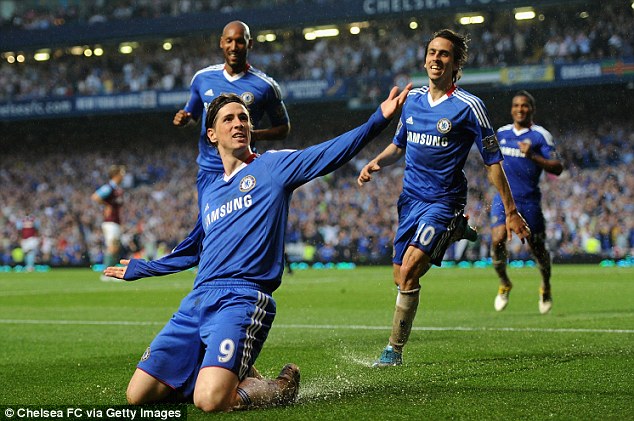 Well, that was awesome. Three points earned, a fairly competent display, some excellent attacking performances, and of course Nando breaking his duck. Not much more could be asked of these lads given the conditions. I know, it was supposed to be hot, but the heavens opened up and brought the thunder and rain, turning this fixture into a smash-mouth NFL matchup rather than a late spring derby. Regardless, there remains the faintest chance that we can catch United at the summit, with Le Wenger and company going down in flames and Agent Sturridge doing us a solid, it's down to us and 'them' for the title. After this ridiculous season which has see-sawed and vacillated from polar ends of the spectrum, I'm not ruling anything out until we're mathematically eliminated.

As we had hoped, Carlo stuck to his guns and deployed an identical lineup, save for subbing Bane in for Paulo. The message at this juncture is clear- if you play well, you'll continue to get chances. Rather than needless rotate and make adjustments for the sake of adjustments, Carlo kept to his intuition and the result was another 3-goal display. Again, the 4-3-3 was the formation du-jour, and it yielded some fantastic forward footy. Malouda had the first tangible chance on goal, winding up one v one with Green, but could only fire his shot straight into the England keeper's torso. From there, Sala Kala found space within the box but couldn't corral his touch in time to get of a proper shot. Nevertheless, Chelsea looked on the ascendency for the first 20 minutes, creating chances and carving the West Ham back four open on an as-needed basis. Didier looked, as he has for the past month, dialed in and focused.

The first goal came from the foot of Frankie Lamps, who finished an excellent on-the-ground cross supplied by England's best left back just before the halftime whistle. With the momentum swinging towards West Ham prior to that, it was a well-timed strike that helped to buoy our chances of victory and give us breathing room heading into the second 45. Demba Ba, in particular, looked threatening throughout, while West Ham found spaces on the counter to call big Pete into duty- which he was able and capable of accommodating.

The second half saw Yossi take the place of the Bison, who came up lame on a number of challenges and looked troubled by a hamstring injury early in the first half. By this point, the weather had taken a turn for the menacing, with roaring thunder and lightening punctuating the sky and causing plenty of cheer amongst the rain-drenched supporters, who were in excellent voice throughout and buzzing with excitement. Bob, who looked composed and in great control this afternoon, had a long-range effort cannon off the crossbar. Else, West Ham had some legit momentum in the second half going their way. The combination of Ba and sub Robbie Keane managed to produce a number of effective chances to capture a goal, but West Ham's finishing on this day was rather poor in quality.

Carlo introduced Nico for Sala, and as his final decision, opted to bring on Nando in Diddy's place on 75 minutes. From his introduction, Torres looked more involved than in previous fixtures. He was running with pace, challenging in the air, and overall attempting to make something out of nothing. On 84 minutes, all the pent up frustration and angst gave way in an expertly dispatched goal that was more fortuitous than emphatic. A silky left-footed strike that sent the Matthew Harding into raptures and delight. That roar....it gave me shivers. I don't think another sound this season will compare to the way the entire Bridge embraced it's new # 9. The team's response? Downright epic. A pile-up of bodies, a few bear-hugs, and tons of erstwhile screams and battle cries. He had arrived, at last. And everyone on the pitch felt that one, you could just tell.

With the demons exercised, and the crowd buzzing and in full voice, the match resumed, with a third goal in the offing. This time, a Nando pass intended for Nico slipped through two defenders, to which Flo found at his feet and dispatched with righteous venom and indignation into the upper left-hand corner, rendering the match over and putting a definitive button on the evenings proceedings. All told, an excellent performance from a team that is, by Carlo's estimation, in a "good moment". With the season's finale in our sights, we must continue to move forward and build on these 3-goal performances into the future. But to be honest, I'm still giddy about that Nando goal. Really, really giddy.