On the up and up. 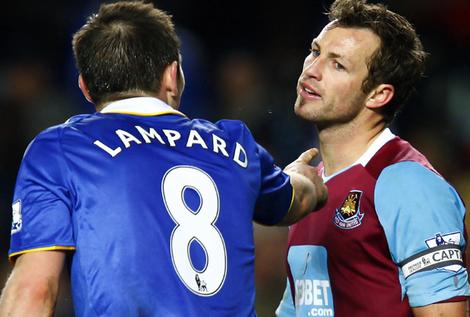 It used to be, in years past, that this matchup carried more clout that in recent memory. Obviously, a West London derby is always something we as supporters want to win in convincing fashion. But it certainly helps when both teams come into the fixture on the ascendency. While the famous CFC have treaded water and struggled this season, our recent form suggests a temporary shift in fortunes, whilst West Ham continue to toil in the dreaded 'drop-zone'. Although, propos to ex-Blue Scott Parker for picking up the Writers Player of the Year award. Here's hoping he doesn't pull a Sergio Ramos and drop it like it's hot.

Why: Because derby matches matter. And because we have an outside chance of retaining silverware if we win out the remainder of our six matches and United slip up again. It's not wholly unrealistic, mind you, but it would take some serious good fortune on the part of the Blues to pip Manchester at the dead of the season. But the focus, at this point, needs to be on handling our business one match at a time. Not to get too ahead of ourselves and to watch the scoreboard for updates. Nay, we need to remain steady in our approach and take care of the opposition at hand. For all of their flaws, and West Ham carry many on any given weekend, they're feisty. And they'll be up for this match, you can bet on it. And of course, there's the Avram factor- something that cannot be thrown aside, knowing that he has the wherewithal to conjure minor miracles from time to time. But, if this Chelsea side continues on its currently impressive form, it'll be our day in the sun (literally, it's expected to be HOT in London tomorrow).

Well, Carlo stuck to the blueprint in the last two matches, keeping the sides consistent and the results were excellent in both cases. Dropped to the bench were Nico and Nando, and in their stead Sala and Diddy have been reborn. The papers will have you believe that Carlo is planning to give Nando a run out in favor of Diddy, but I'm thinking if it ain't broke, don't even think about trying to fix it. Seriously, why tinker with a good thing at this point? Let the team sheet remain the same and see if the results continue to pour in. Worst case? You make some subs....before the 75th minute.

What we can say, with great certainty, is that the 4-3-3 is clearly our wheelhouse. Against Birmingham, Carlo threw Nico and Nando on and attempted to shift the formation, but the final 30 minutes were sloppy and disjointed compared to our comfortable stroll-in-the-park performance over the prior 50 in the 4-3-3 vein. So stick with it, Mr. Ancelotti. You'll make a lot of us happy if you do. On the injury front, Alex and The Blue Kenyan will be missing once again, whilst there's no update on the status of England's best left back. If Ash isn't fit, I reckon Carlo will throw Yuri in the mix but why not give Bertrand another run out considering his excellent performance in mid-week.

On the Nando Conundrum:

Look folks, I'm not drinking the Kool-Aid quite yet. I know, I know, he hasn't scored yet. But as long as we're winning matches, I don't give two shits who's bagging the goals. It's a funny game, football. A month ago if you told me Drogba, Kalou, and Flo would be in rich form I would have thought you'd hit your head. Here's what we do know- at some point, Nando will open his account. And then, the media and the fair-weather fans will have to find something else to lament over. But until then, it ain't a crisis as long as we continue racking up three points week after week. Now, the media is rife with suggestion that Carlo is planning to risk the season by throwing Fernando into the starting mix tomorrow. Based on such articles, and considering the quick turnaround of this match, here's what might well wind up being the actual starting eleven tomorrow:

Truth told, neither lineup looks weak, and based on the competition at hand we should feel that a win is certainly on the cards.

Happy birthday tidings abound to David Luiz and John Obi Mikel! Both celebrated their birthday today, and both should enjoy tomorrow by continuing to push the team forward in our quest for some semblance of success this term.