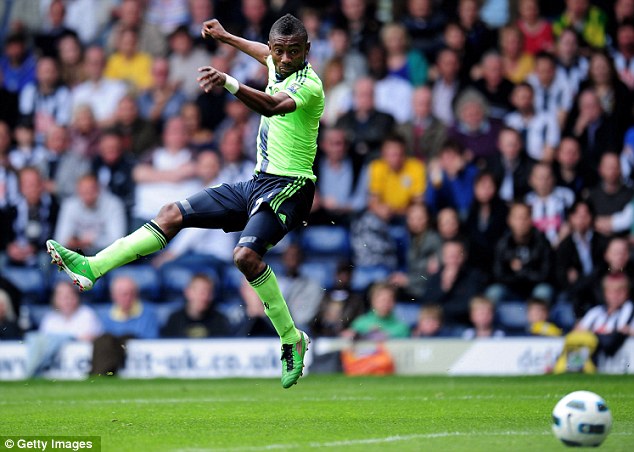 My apologies, folks, for the delay in getting this sucker online. It's been a bear of a few days in my world. Between my internet intermittently working and the prospect of hosting my future in laws for the past ten days, time has been a commodity that has rarely worked in my favor. But alas, I did manage to watch the match on Saturday, and will attempt to briefly transcribe the most salient points as I saw things.

Yes, he continues his stretch of excellent form, bagging a goal and showcasing once more his influence on the proceedings. This time, it was the power and nimble footwork that was on display- the predatory strike for our first goal, followed by the fleet-footed dribbling and drive that resulted in our second score. The power was in full effect as well. Kanye West would be pleased with what he saw. It was raw, at times it was nasty, but through it all, it remained under control. Brom clearly lacked the wherewithal to marshal his game, a fact that's been apparently true for our past three fixtures. Not knocking Carlo's rotation policy, but, based on what we've seen of late, I think it's safe to say Mr. Drogba deserves a more frequent chance to strut his stuff into the twilight of this season.

Over, and over, and over again. We make this point weekly. Now, I think people understand why. It's time to face facts: our personnel and team is designed exclusively to play this system, and within its construct, thrive. Though we've shown some thoroughly inept capabilities in front of goal of late, it was nice to see the old Chelsea in the first half, bombing forward, responding to adversity, and bagging a quick salvo of goals. All told, West Brom barely held the lead for 5 minutes. Nice. Defensively, we showed limited gaps in the framework, save for being caught napping on the counter. EBALJT was not at his imperious best, nor was our Brazilian ex-pat Bob. But, we did enough to limit our mistakes, and overall, came through without incident.

It was valid. Sure, it was a good call. But the movement, positioning, control, and finish were truly fantastic. Yes, I'm talking about Nando's unfortunate shot on goal that did not count. But hang on folks, because I'm going out on a limb and saying that even though it didn't count, it might have psychologically have worked to his advantage. You see, the combination of having little to play for going into the final six fixtures this season, coupled with watching the ball roll past a keeper and into the net might well have boosted our Spaniard's confidence to a point that could result in some goals. Could. Not will. But could. And at this point, I'll take it. I really will.

Carlo's future, whether or not he's willing to admit it, is set in stone. But in the meantime, he's going to continue tinkering with the lineup and playing with the squad composition on a case-by-case basis. This time, it was Ramires dropped to the pine, in the wake of his red-card debacle in midweek, as well as a spot on the bench for Nico. Slotting in, Obi Trice and Kalou- both of whom looked composed and comfortable. For his part, Sala did enough to in my opinion, ensure he'd get a second chance this week to strut his stuff. But, knowing Carlo and his penchant for the obtuse, I'm suspecting both will be back on the pine this week and we may well see spot starts for Yuri-dinho and Paulo. But what about.......nevermind.

He scored! Remember when he used to do that on a regular basis? I kid- he hasn't exactly been at his best this season, but it's been rather painful to watch him fluff chance after chance in the past eight weeks. So, imagine my surprise when he knocked in a goal from the run of play, precisely the same chance he failed to net against United. Of note, it was really nice to watch us score from the run-of-play in general. Through a well-thought-out offensive attack that led to a wave of chances rather than an uninspired drub of kicks and punches, or a spot kick. Imagine my surprise when after Didier netted, Kalou followed with a left footed drive that wasn't heading to the upper-deck. And then, Lamps kicks in a goal? It's raining somewhere in Hades, folks.

EBALJT - 6 - Yeah, I'm just going to disregard this one. Clearly not his best day at the office.

Cole - 7 - Best left back in the world. Leighton who? It's not even close, folks.

Mikel - 7.5 - Showed his worth in the middle, and suggested to Carlo he deserves more than just spot chances.

Flo - 8 - Involved in all three goals. I think his play correlates to warm weather.

Kalou - 7.5 - Loved his energy, including his left-footed finish. Show me some more, young buck.

Torres - 6.5 - Limited minutes, a disallowed goal, but a nice showcase.

Yossi - 6 - Better from the Israeli, but still some way off the pace.

Bosingwa - 6 - Got forward, did his thing offensively, gave little in the defensive department, as per usual.