According to Football Shirts UK, Chelsea's new home kits have been leaked. I've been told to trust these folks as they have a very good track record of getting this sort of thing right, but obviously these could pretty easily be fake [Update: Other sources have pictures of the new kits up too and they look legitimate, so good job getting these up so fast, Footballshirts.com!]. Anyway, there's an interesting twist to these purported new kits - they're hooped instead of being solid blue. Think the 2009/10 aways but in better colours... or I could just give you a picture, I suppose: 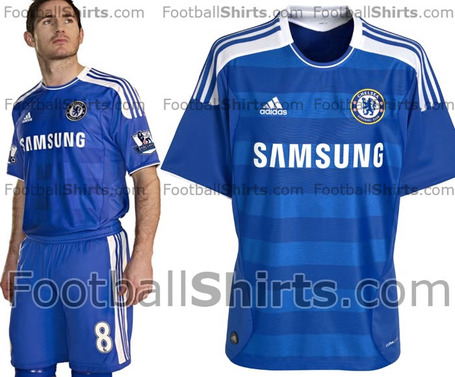 That photo is via FooballShirts.com, just in case that wasn't obvious enough. Gone is the red collar, which I never really liked but I know some people were big fans of, and we're left with the hooping, which I really love, as well as some strange side panelling which I'm not so big on. If not for one little detail, I'd absolutely adore these.

You've probably guessed it. Too much white. And no, I don't mean the gold champions patch is gone (har har). I get that the triple stripe is an Adidas thing, and that's totally cool, but why is the triple stripe in blue on a monstrous white panel? The big white stripe on the arms and shorts looks to be a good five inches wide, and I'm just not feeling that at all.

So, I'm not sure if this is an improvement over this year's home jerseys, despite the fact that I love the main feature to bits. I'm also unconvinced that the away jerseys will be able to top this year's beauties, so it doesn't look like we'll be seeing a huge boost in the overall awesomeness of our football shirts. Hopefully that's compensated by bringing in some awesome players instead!