Three points earned, but hardly the convincing display we sought. 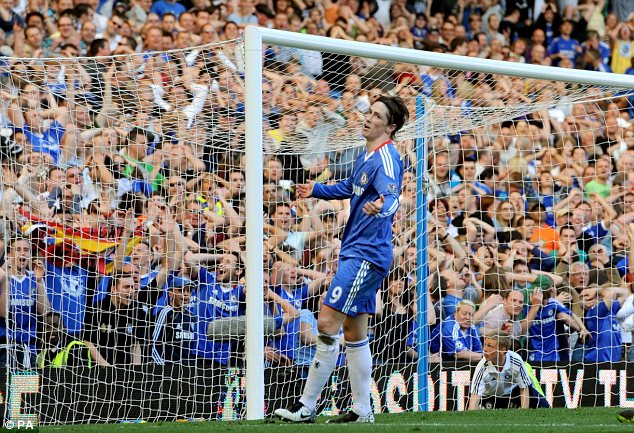 Sunny days at The Bridge are back, weather wise. But on the pitch, I think we can all agree this was not our best display. Despite starting brightly, the Blues failed to find the net once more, until a scrum inside the box resulted in an awfully fortuitous goal for Florent and the Machine. I'm beginning to believe that we're due for a breakout performance, but I'm lying to myself if I think we're going to open the floodgates at Old Trafford on Tuesday.

On this afternoon Carlo opted to rotate the lineup, giving a number of players a rest ahead of Tuesday. Into the starting lineup were Paulo, Bane, Bob, Ash, Ramires, Obi, Lamps, Flo, Nico, and Diddy Sauce. Reverting to the 4-3-3 of months past, Didier was deployed in a lone striker role up front, an opportunity he clearly relished on this occasion. On the bench? There were places for the returning pair of Yossi and Alex, as well as our lone Spaniard. The sun was shining, the mood was buoyant, and the crowd looked hungry for a vintage display. Roman, in his customary box seat, sat and watched as we jumped out to a bright start. Within three minutes, a clear chance inside the box developed, with Didier crossing to the on-rushing Lamps, who failed to corral the cross, instead fluffing his shot wide, which fell to Ramires who could do little with the opportunity. It would be the first of many chances on this day, but a sign of the frustrations that were to come for the boys in Blue.

Wigan, to their credit, defended with aplomb, and made the first half a stuck-in affair. Plenty of possession for Chelsea, but overall a labored performance that seemed to reek with complacency. If I had to guess, I'd reckon the guys had one eye on Tuesday already, judging by their general lack of focus. The first half ended 0-0 and Carlo elected to replace Mikel at the half, in his stead bringing on Yossi. As well, Nico was replaced by Nando later in the proceedings, while Alex was brought on for his first action in months towards the end of the match. The goal? Yeah, nothing spectacular, just a feisty scrum that resulted in Malouda poking home from close range. One goal was all she wrote on this afternoon, even though we did appear to grow in confidence as the match waned to the dying embers. A flurry of chances in the final 15 minutes couldn't add to the tally, and we ended with three points and no knocks or injuries heading towards Tuesday. Job done.

Yossi + Nando = Chances. You could just tell that they have their own understanding on the pitch, and clearly Yossi is looking eager to help FT break his duck and get on the score sheet. The problem, though, is that until Nando comes good, it seems everyone is going to force-feed him chances, which takes away from the overall flow of the match. But to his credit, Nando looked lively and sharp. Should have scored yet again, but an excellent save from Al Habsi was enough to deny him.

The 4-3-3 is obviously better suited to our current personnel. Diddy seemed more engaged, and the majority of our attacking moves looked more fluid than in weeks past. Granted, the goals were hard to come by, but certainly the execution prior to the final third was good. Obviously, there's plenty of room for improvement, and many mistakes are easily covered by the fact that Chelsea were pitted against a Wigan side that barely threatened throughout. Still, to take down United on Tuesday and proceed in the CL, we need to summon an inspired performance.

Carlo will have himself a bit of a selection headache heading into the United fixture. With so many fit players, and several on the periphery looking to stake a claim for more regular minutes, it will be interesting to see what Carlo decides upon. I'm not going to venture a guess until after his presser tomorrow night, but in the meantime, I'll just mention in passing that Yossi clearly looks like he deserves a chance, while Nando, based on his last two performances, should get a call as well.

Cech - 6.5 - Rarely called upon, but nevertheless alert when needed.

Paulo - 6 - Good to see him get a match, even if his better days are long since past. Got forward but as a consequence left the right side all-to exposed on the counter.

David Luiz - 7.5 - How bout his footwork? A couple of silky touches, a tenacious display on defense, and a few delightful challenges summarized what was another excellent display from our best signing in January.

Bane - 6.5 - Shifted from center to right with the introduction of Alex. Minus that one pass, which had my heart in a blender (EVE 6 fans, that one was for you) he was equally composed.

Ashley - 7 - Never under threat to watch his man, he got forward plenty and contributed to the attacks as necessary. Solid stuff.

Mikel - 5 - Total bystander. Substituted at the half.

Lampard - 6 - Good, if unspectacular. Helped move the attacks forward, but I thought his decision making was often poor on this afternoon.

Flo - 7.5 - An extra half point for netting the only goal on the day, he looked lively and totally in control on the left. Threatened the net multiple times, and did an excellent job cutting inside defenders. Will no doubt get a recall on Tuesday.

Didier - 8 - MOTM - Yeah buddy. Back in the saddle, harassing defenders, using his unique collection of size and skill to burn defenders time and time again. Frustrated to not net, he was a cut above the rest on this afternoon.

Nico - 6.5 - Forwent his own personal accolades to supply Diddy with chances, he looked tidy in possession. I'll be curious to see what Carlo decides to do with the strikers on Tuesday based on their collective performance on this afternoon.

Yossi - 6.5 - Sure, he's rusty, but hell who wouldn't be after months on the pine. Enjoyed watching him link up with Nando, and fully expect the two to combine for a goal or two over the next week.