Chelsea squeaked by against Wigan Athletic despite being outplayed for worrying amounts of the match. Although the Blues looked promising in the very early stages, they never made that superiority tell and began an ill-advised strategy of letting the visitors have the ball and trying to hit them on the break. For most of the match it was a pretty classic battle of three man midfields (Chelsea's 4-3-3 vs. Wigan's more defensive 4-5-1), although Chelsea did switch to something approximating a 4-4-2 diamond later on when Fernando Torres was introduced for Nicolas Anelka. Formation chart after the jump.

With Chelsea restored to their more familiar 4-3-3, Didier Drogba was much more involved in the match than he has been as part of a strike pairing. This wasn't due to Chelsea having more possession, either - they certainly didn't conclusively win the midfield battle with the original trio of Ramires, Frank Lampard, and John Obi Mikel. Drogba's 37 pass attempts were more than he's tried in any match since Fernando Torres joined the team. I don't think that's particularly telling, but the Ivorian did seem far livelier than we've seen him in a little while. So too was Florent Malouda, who spurned a couple of first-half chances but ultimately scored the winner and was far more active throughout the match than we're used to seeing.

There were, however, a couple of problems with the way Chelsea were playing, and they help motivate Carlo Ancelotti to shift shapes once more. The first, and most obviously important, was that Mikel wasn't actually doing his job in defence. We should probably have expected him to be a little bit rusty on the ball - he wasn't, and actually combined very well with Lampard and Ramires throughout the first half. However, he was strangle incapable of stopping Wigan from playing - he's the one who should have been most responsible for disrupting their passing, and instead he made no interceptions and no tackles, essentially allowing the Latics to boss the game for that really frustrating period in the first half. It was ugly.

The second issue was with the lopsided attack. With Ashley Cole on one side and Paulo Ferreira on the other, the game was always going to be slightly unbalanced, but they took it to interesting levels on Saturday. Florent Malouda as the left forward made almost three passes for every one Nicolas Anelka on the right attempted, and with Ramires so central he wasn't really capable of providing wide support.

These two factors are probably what prompted the substitutions of Mikel and Anelka at halftime and 62' respectively, with Yossi Benayoun and Fernando Torres coming on in their place. The first change did little for the overall shape - Ramires simply dropped into the vacated holding role (and frankly, did only a little better than Mikel in keeping Wigan's midfield quiet), and Benayoun acted as Lampard's partner ahead of the Brazilian. The second change, however, forced Chelsea into what ended up being a 4-1-3-2 with a fluid third band of Malouda, Lampard, and Benayoun, which was the impetus behind many of Chelsea's late chances

A lot has been made of the fact that Benayoun is probably the only player in the ranks who can act as a 'true' trequartista, and he had a couple of excellent passes against Wigan to set up Torres, but it remains to be seen if he can be relied on as a true playmaker for the Blues. For what it's worth, his passing for the final 45 minutes was considerably more direct than Lampard's at any stage of the game - Benayoun was mostly pushing forwards while Lampard instead opted to spray the ball from flank to flank in the first half and dropped deeper in the second: 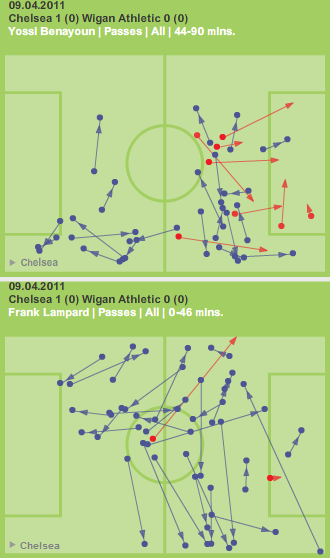 Despite Chelsea not playing anything like well, they had by far the more chances, shots, and shots on goal. Wigan troubled Peter Cech just three times, while Al-Al Habsi made nine saves and of course conceded on the Malouda goal. It's hard to say why, but Wigan simply didn't attack, even when they had the ball for long periods. The visitors attempted 22% of their passes from inside the final third, Chelsea 32% - and if you don't move the ball around in the vicinity of the penalty area, you're not going to threaten a goal.

Wigan's hesitancy to actually go forward when presented with the opportunity was obviously helpful for the Chelsea defence - David Luiz and Branislav Ivanovic had basically nothing to do for most of the match, but it made the idea of hitting them on the counterattack seemed rather ludicrous, as there was never any attack from which to deliver a riposte. Instead, the game stayed tight, and Wigan stayed organised until the middle stages of the second half, when Roberto Martinez introduced a pair of attacking options and things started to fall apart a little bit. The Chelsea goal was of course from a set piece and not open play, so it's difficult to point the finger at Wigan tactics in allowing it to happen, but the Latics didn't look nearly as defensively solid when they switched to a 4-4-2 with Connor Sammon and Franco di Santo up front.

Let's take a look at the passing now.

Figure 4: Individual passing for Wigan vs. Chelsea, 4/9/11. Powered by Tableau.

Ben Watson cleaned up here - although James McCarthy didn't see that much of the ball and Mohamed Diame even less, Watson ensured that the midfield contest between the sides was more or less even. It's interesting to see how the wide players for each side on the left and right performed, because the flanks behaved very differently for each team.

On Chelsea's right lived Paulo Ferreira and Nicolas Anelka, facing Charles N'Zogbia and Maynor Figueroa, who are both typically very dangerous. Between the four of them, they tried 130 passes, mostly through Figueroa. On the other side of the pitch were Emmerson Boyce, Tom Cleverly, Ashley Cole, and Florent Malouda, who between them attempted 212 passes - 63% more than the quartet on the other flank. The right side was ludicrously compressed all game, and Chelsea's focus on the attack down the left let Cleverly get in behind Cole for more often than N'Zogbia bothered Ferreira.

All in all, it was a decidedly unimpressive performance from the Blues. The only positives were the result and the returns of Alex and Benayoun to the squad. The return to 4-3-3 went badly, Mikel was poor, and Torres still doesn't have his goal. They'll have to do much better to trouble Manchester United at Old Trafford on Tuesday.