Share All sharing options for: Fast Five: Things we learned from Blackpool

The Guardian has its 'five things we learned' series. Not bad. Moderately informative and enjoyable on its day. Here, though, we don't play. When we go for a five-point presentation, we do so fastly. And furiously.

Is fastly even a word? Who cares.

Our latest series - which may or may not turn out to be a series - spotlights the five pieces of info I collected from the latest match starring the famous CFC. Its name, well, it honors a groundbreaking movie franchise, one that brought street racing to the forefront of the American mind while launching the likes of Xander Cage and Caleb Mandrake into the upper echelon of Hollywood's A-list. You don't star in Timeline without being of Oscar caliber. You just don't.

Oh, and living your life a quarter mile at a time. We learned that was the way, too.

So, in homage to everyone's favorite fictional gearheads, let's see what we learned from last night's 3-1 win over Blackpool at Bloomfield Road. Shall we?

That was what Carlo had in reserve on 20 November, when we were dealt a 1-0 setback at Birmingham - despite recording a startling 32 shots. Meanwhile, our bench Monday against Blackpool included Turnbull and McEachran, the only holdovers, along with Malouda, Anelka, Kalou, Ivanovic and Ferreira.

Different? Only slightly. Sure.

Four genuine contenders for first-team places versus two, maybe (Bosingwa, Sturridge). Potential or proven experience? I'll opt for the later, despite my affection for our young options. And, to think, Alex, Yossi and Mikel will soon be joining the dominion of the fit. Many of us have lamented this feeling of entitlement that has surrounded the club, particularly the players, this season. We've longed for a day when the glory days of competition for places would return. That time, it seems, is now. It could not have arrived at a more crucial time, either.

2. Bob still has some maturing to do
Our newest defender is a gem. An absolute gem. That's not to say he doesn't have some improving to do.

Bob displayed more excellence against Blackpool, sure. He's ability on the ball is exceptional, and his pace, wow. Yet he didn't look too astute when caught all alone against an attacker in possession. I distinctly remember him being undone twice when a Blackpool player decided to run at him with the ball, one being in the box that forced England's Brave into some serious damage control.

The likes of David Silva, Tevez, Ballotelli, amongst others, no doubt have viewed the tape and are hoping for a similar encounter with our electric Brazilian.  Perhaps this was a result of the hamstring problem he was carrying prior to the game (I hope), Either way, I expect our favorite Bob to be alert to the threat in the coming future. 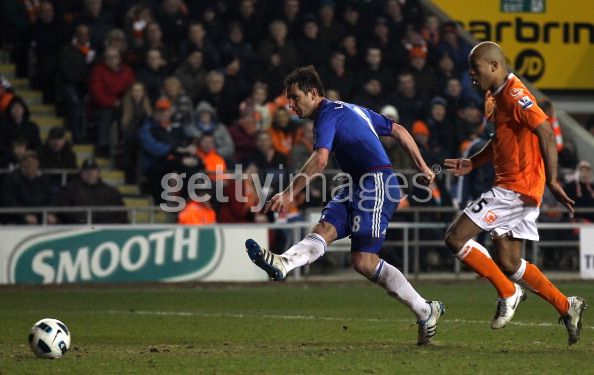 3. Lampard will get his 20
A sixth consecutive season with at least 20 goals seemed an impossible task for Sir Frank Lampard only a month ago. Now, after his latest display, I'm thinking it's in the bag.

Lampard's brace Monday was exceptional. He's now scored three in two games, a statistic that no doubt will do wonders for him going forward. Frank may still be figuring out his overall role in this formation, as well as recovering his own fitness, but the attacking movement has already resurfaced. Our third against Blackpool, his second, was vintage. The beautiful late run across the edge of the box, the finish across the keeper - it screamed Frank Lampard.

He now has nine goals in 19 appearances this season. Five assists, too. Plenty of games remaining. Who's betting against him reaching FC Twente? I know I'm not.

4. Torres may be the red-headed stepchild
Another game for our Spaniard muy expensivo. Another day of criticism.

The kid can't win. Monday, he couldn't get the ball. Service was nonexistent for Torres, even into the final 20 minutes when the match was nothing more than a training exercise. The problem is two fold: our style isn't conducive to his style of play and there could be, as ridiculous as it sounds, an agenda amongst the rest of the team to isolate him.

As has been pointed out in both the MotM Poll and Recap threads, this current system/formation just isn't helping Torres' transition into the side. He's doing his best to fit in - peep the lack of visible frustration he shows during matches - but can't find a way to influence the side. Torres doesn't enjoy dropping deep or drifting wide. He wants to isolate himself and play off the shoulder in a very open style. I thought his movement was good against Blackpool, as it has been for the majority of his time here so far, yet without the service, he found himself moving into positions where he's not going to be as effective. We need him through the center, on the edge of the defender, looking for the threaded pass. Then again, he's also used to playing as a lone target. It's not just the other players, either. Torres is going to have to adapt to the new surroundings, and that's going to take time as well.

It's kind of a weird situation, one that will certainly be dealt with in the summer. The question is whether Carlo will figure out how to get the most out of him before then.

A conspiracy against the man, though? Nonsense. There's no question that Torres was overlooked on many an occasion last night. Malouda, in particular, ignored him at least three times, opting rather for a wasteful shot from an acute angle. I would argue this has more to do with our veterans not understanding how to get Torres involved, and Torres struggling to comprehend his role with us. Then again, you never really know with this lot. Drogba is somewhat of a drama queen ain't he?

5. We are not out of the woods, yet
Consecutive league wins, one against the league leaders. Sounds like a great week, and indeed it was. Let's not allow a few points to cloud the real picture, however.

We're still far from our best. The United win wasn't exactly the result of us playing better than them. For me, it was the combination of some favorable decisions and a hell of a lot of passion from our boys - something that had been missing for months. Monday's win was comfortable, yes, but hardly a Rembrandt. More like a Monet - beautiful from afar, a bit dodgy when you look a tad closer. Lay some of that down to the industry of Blackpool (refreshing, commendable), but we are certainly not immune from criticism. We were shit, then pretty good, then coasted, then completely switched off. I'll take a win away from home anyway I can get it, but some consistency in play would be nice.

Don't get me wrong, I'm ecstatic that the club has rediscovered how to win - and score goals. But we must not get overconfident when there is still much work to be done. The 4-4-2 is still flawed while Torres, as mentioned, is at sea. Our midfield is still putting it all together, and we're still prone to drifting out of games.

That may sound incredibly negative, but trust me it's not. What that says to me is that the best is yet to come. You and I both know this team has much more to offer. If they can somehow harness this momentum we've built over the past two weeks, patch up the emotional fragility and continue to travel on this northern trajectory, we may well be in for something special this season. Here's to hoping for that - and a Torres hat trick, of course.