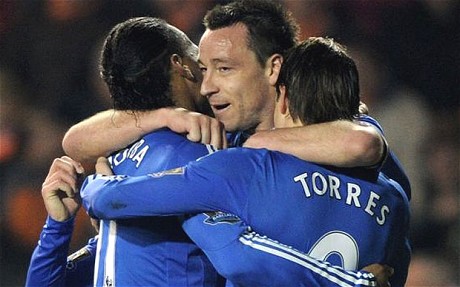 So off we went to the Seaside, and away we go with three points after a night of unimpressive football. Lacking was the continuity and crisp attacking display from Tuesday's second half - in its place a sloppily administered 4-4-2 that the players have yet to grasp. But results, at this stage of the season, are vital and if we stand a prayer of catching the fellas up north, we have to put a premium on points.

I'm not advocating that we, by any means, don't have a lot of work ahead of us. If we're planning a late-season surge for the top, we genuinely have to play better than last night in Blackpool. It was at times stuck-in, and at others full of attacking movements. True to the script of the last three months, we waltzed in and out of frame for extended stretches and gave the Seasiders a plethora of late chances to steal a point. If we stand any hope of advancing in the CL, it's apparent that Carlo and the rest of the staff have their work cut out to integrate Nando and find a rhythm that works on a consistent basis.

I'm keeping this one brief for now.

What You Need to Know:

We won. It was unconvincing, but certainly satisfying.

Our attackers are severely lacking in continuity and understanding. This, needs to be sorted. ASAP.

Defensively, our focus was poor. This, needs to be sorted. ASAP.

We're alive in the League for another week. 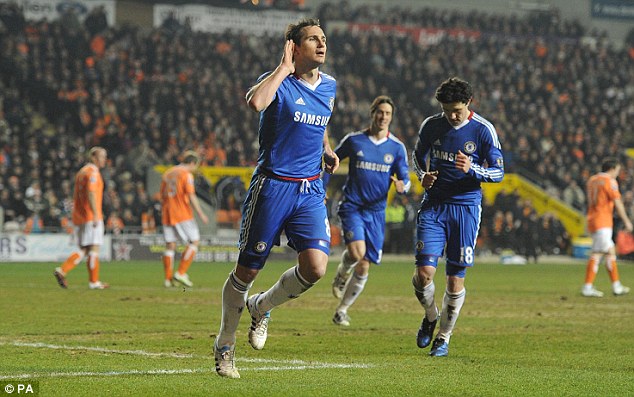 GK - Cech - 7.5 - A couple of fine saves in the both halves, particularly, merit note. He was inch perfect throughout, save for Puncheon's finish towards the final whistle. Pete's on his grind, son.

RB - Bosingwa - 6 - Should probably give him a lower score on aggregate, but he almost nicked a goal with a nice curler. Otherwise, skinned early and often during the proceedings. Not sure if the knees will ever get to full-strength long term. He's still retained his quickness, but his overall speed and marking abilities look somewhat diminished.

CB - EBJT - 7.5 - Resolute. Opened the scoresheet with a 1st half header, and provided sturdy cover throughout. We've now tallied 8 goals from our collective defensive unit. Good work on set pieces once again led to JT finding himself completely unmarked. Defensively, handled his tasks with comfort. I particularly enjoyed his sneering and mean-muggin' in the second half.

CB - David Luiz - 6.5 - An emotional letdown from the United game for the Brazilian, methinks. There was almost no way he could have measured in stature to the heights he reached last week, so it might be a tad unfair to judge him as such. Still, as much as I love Bob, I think we can all agree he has some work to do to round out his defensive skills. Showed some good awareness to block and intercept passes, but needs to sharpen his instincts on determining what to do when bombing forward.

LB - Ash - 6.5 - Usual fair from Mr. Cole. Nothing of major concern, got up and down the pitch, intercepted play and created opportunities on the left side of the park. Of concern, in my opinion, has been his inconsistent crossing into the box. It seems he had little trouble last year with this - perhaps the formation adjustments are messing with his head.

RM - Ramires - 5.5 - Not a good game for Go-Go-Gadget Brazilian. A spectator in the first 45, and incapable of stamping his presence on the proceedings. I'm giving him a pass this time, but he has to do better next week against Copenhagen.

CM - The Bison - 6.5 - I think I saw some flashes of improvement from Mike, but then again I can't be certain. I'm slightly blinded by my love for him, that I may well be tricking my brain into thinking he's doing better than he actually is. Help me..

CM - Franklin - 7.5 - Franklin Comes Alive! His first goal from open play since August, but I really wanted him to cross that to a wide open Nando T for his first CFC goal. Sigh. Clinical once again with his second penalty in as many games. I mentioned in an earlier post that he was slowly finding his mid-season fitness and rhythm. Seems I may have been right with this one, but clearly wrong with the next player evaluation.......

LM - Yuri-dinho - 4.5 - Of everyone on the pitch before the opening kick, he was the one player I LEAST expected to no-show. His first start in over three months, coming off a strong cameo appearance against United, I thought our Russian import would be fired up and attempt to stake claim to a starting berth. Shit, was I wrong. Couldn't decide what to do when on the ball, made poor decisions, and struggled to keep up to terms with the pace of the match. Rightfully substituted for a much more effective Flo in the second half.

ST - Nando - 5.5 - I'm not panicking, nor worrying. I'm just hoping we can find a combination of midfielders before Tuesday that can manage to get Nando some legit service when he's unmarked for stretches and acres of space. Until then, I can't blame the guy for failing to score.

ST - Sala K - 8 MOTM - Brilliant impact. Earned the penalty and created the third goal, and almost added a fourth before the final whistle. Bright, lively, and creative in attack over 35 minutes. I think he's earned a chance to acquit himself next week, but no one would want to guess Carlo's plans before then. My pick for Man of the Match, though I'd be wise to give it to John as well.

LM - Florent - 7 - The advice from the coaches was simple: run at them - and Flo delivered. Used his limited minutes to provide a needed threat off the left side, and did well to threaten the net. More, please.

CM - Joshy - 6 - His composure on the ball is a thing of beauty. Never looks out of control, and seems to have a knack for executing smart forward passes.